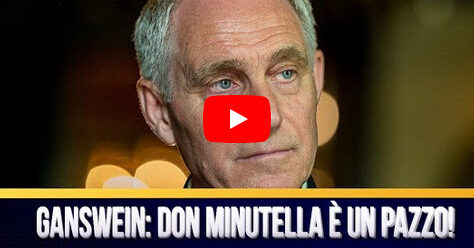 To summarize this explosive news, in English, I relate the following points:

This phone call reminds me of the one I received from the Archbishop, (see here) and of what was said of me in the national Catholic Newspaper, Avvenire, after Andrea Cionci cited me for having done a detailed syntactical Latin analysis of the Declaratio of Pope Benedict, which also used the same insult.

Don Minutella spoke in greater detail about this matter later in the evening, on his YouTube Channel, Radio Domina Nostra:

In this video, Don Minutella says the context of the Archbishop’s insult against him, had to do with this, that the 8 Priests who declared for Pope Benedict XVI in August, wrote a letter in German to Pope Benedict XVI. The brother of one of these 8, who himself is Bergoglian, received a phone call from Helmut Ganswein, in regard to this letter in German to the Holy Father, and thus, Archbishop Ganswein joined the conversation without revealing his own phone number. — Don Minutella remarks that this is a strange round-about way to respond to a letter to the Holy Father. I say, IF, the Holy Father was allowed to receive it. I would think that this strange way of responding, means that it never arrived in his hands. This manner of acting is more like that of the Sicilian Mafia, not of the Holy See.  The phone call by Father Helmut Ganswein, was made from the Vatican territory.

The cordial telephone was organized by Father Helmut, and was recorded. It lasted 20 minutes. — In Italian law, telephone calls cannot be published, so Don Minutella summarizes. And I summarize him in turn.

Ganswein’s first declaration: “Don Minutella is a nut. And he who follows him is also a nut!”

The Church is disintegrating, under Bergoglio, in all parts of the world, but Ganswein’s first words are these!

Don Minutella says, “How can anyone dialogue with people like this?”

Ganswein’s third declaration: “His Book, ‘Peter, where are you?’ is not worth even the paper it is printed on!”

Don Minutella says, “I do not know what this could mean.”

Ganswein’s fourth declaration: “Pope Benedict has appeared many times with Pope Francis, and is totally faithful to Pope Francis.”

Don Minutella says, that If Pope Benedict really is in communion and ‘totally faithful’ to Pope Francis, … but we know this is false, since Pope Benedict XVI has several times contradicted the agenda and intentions of Bergoglio regarding changes in the Church. He then cites the book with Cardinal Sarah on the Celibate Priesthood, his teaching against communion to public sinners, he teaching against idolatry…  So either the Archbishop has been blinded by God for his complicity or he is intentionally misrepresenting the historic truth.

So Don MInutella is out of his mind, but Ganswein is rationale, saying that Benedict is totally faithful to Francis!

Ganswein’s fifth declaration: “Pope Benedict has never mentioned any other name in the Canon of the Mass”.

Don Minutella responds, we have no proof of this. — Don Minutella says, if the Archbishop is credible after his first declaration, then he can be believed here too.

Ganswein’s sixth declaration: “He has also never named himself in the Canon”

I say, a pope never does this, so what? Does Ganswein actually think he can fool us into thinking a Pope names himself in the canon?

Ganswein’s seventh declaration: “He has never put in doubt the validity of Pope Francis’ election”

Don Minutella says, that this declaration of the Archbishop is incredible, because it would mean that Benedict is the most untrustworthy pope ever to reign. However, it is not necessary that Benedict XVI say so explicitly, since the evidence for the invalidity of the election is abundant and public, already.

This claim of Ganswein is thus, without citation, merely his interpretation of the mind of the Holy Father, and an attempt to make us think that Pope Benedict XVI is 100% in agreement with the Bergoglian “pontificate”. The Archbishop’s claim would mean that Benedict XVI is o.k. with idolatry and the abolition of the traditional rite of the Roman Liturgy, things which are historically evidenced by his previous statements, to be entirely contrary to his mind. Again, after Bergoglio confirmed the Amazon’s Synod recommendations, Benedict XVI immediately responded with the book in celibacy with Cardinal Sarah.

Ganswein’s eighth declaration: “He himself wrote every word of the Declaratio”.

Don Mintuella says that considering the trustworthiness of Ganswein, and since no one put this in doubt, his affirmation of this makes one think that the truth is the opposite, namely, that the enemies of Benedict XVI wrote the entire document.

Ganswein’s ninth declaration: “But there are some errors.”

At last, Archbishop Ganswein has confirmed what I have been saying with other scholars! — Don Minutella says, that this statement would mean that the canonical validity is null, since naming the munus via the word ministerium would be a substantial error. — I say, but Pope Benedict XVI has publicly declared that there are NO errors in it. In the sense that he intended the errors it contained for a precise purpose, to fool the St. Gallen Mafia into thinking he renounced, I believe is the truth. — Don Minutella thinks that Ganswein says this to make us understand the opposite, that Benedict never wrote a single word of the declaration, because he would not have made these errors, and that all this happened because he was already in a sede impedita.

Ganswein’s tenth declaration: “It is absurd to accuse Benedict XVI of holding that he is still the pope, and affirm that the Renunciation is only a pretext; some confratelli use this controversy to cover problems that they have; it would necessary to reflect whether there are old problems to be resolved.” (59:18)

Don Minutella says this is the worst of insults, and shows that the Archbishop has no argument in his favor. It is the lowest of insults to accuse one’s opponents of having skeletons in their closets.

Ganswein’s eleventh declaration: “These witnesses … do much more damage than those who commit liturgical abuses”

Don Minutella says its absurd to think that such are worse that the outrages committed in recent decades.

Ganswein’s twelfth declaration: “There are even those who fault Benedict for not being coherent with his past.”

Then the Archbishop speaks of those who have declared for Benedict, such as Father Gehhard, need to renounce their errors and seek spiritual direction… implying that those in such errors cannot be saved.

Don Minutella responds to all these declarations, with a humorous argument which totally destroys his affirmations: “It’s time to change the wardrobe of Pope Benedict, and get some black cassocks. I will send you the name of my personal tailor and then the confusion about who is the pope will disappear!” — This proves that Benedict XVI does not at all agree with you.