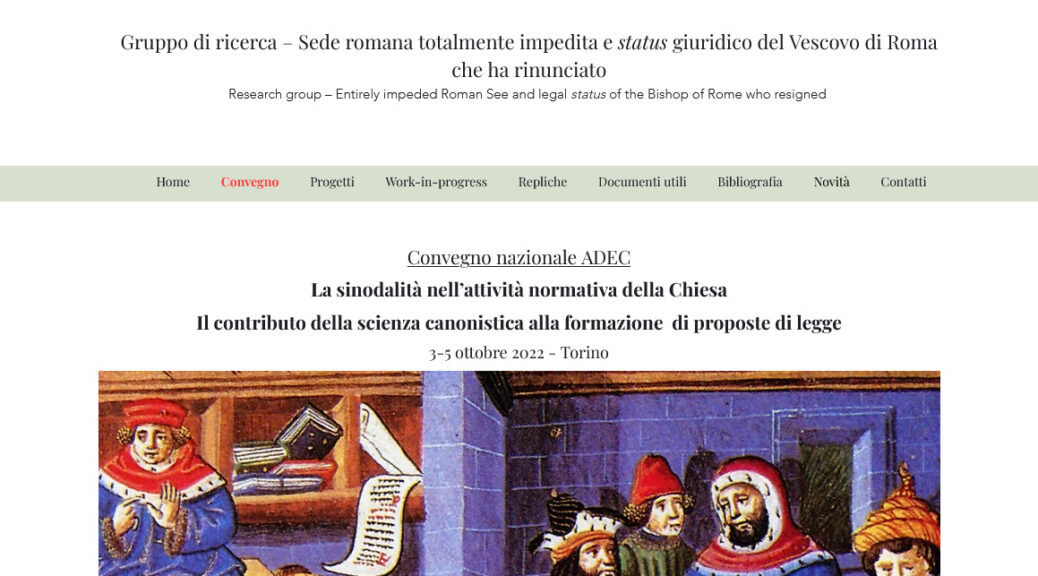 I do not know when this conference was organized, but the working group on an Impeded See, which asks for contributions will work until Nov 21. Can I say that thy are reacting to my many, and recent too, calls for a Provincial council? I will read with great attention their presentation and present my summary and comments here.

This conference is of course part of the response led by the Canonist Dr. Boni of the University of Bologna to explain away the Pope Emeritus problem, which I pointed out 20 months ago was doomed to failure. Below we will see why.

First, their working document on the Impeded See, in the original Italian.

It is clear from the opening pages, that these scholars are terrified by canon 335, wherein it says, that when the Apostolic See is impeded, let nothing be innovated (nihil innovetur). This is a horror to a progressivist mind. They explicitly state that the Church would be in a serious situation if a pope became physically or mentally incapacitated for a long time and could not signify his renunciation. “Pachamama forbid, that the Church Stand stil!”, they seem to be saying. — Any catholic would find this ridiculous.  A normal sane mind, would be concerned with something which is really important: the salvation of souls, and how the Church should conduct Herself without the Vicar of Christ to sustain and support her and confirm Her in the faith by his voice and care! — I get the impression that this working group was funded by the Rothschilds…. but I editorialize…

Secondly, they divert the consideration for obvious political ends. Because the consideration of what to do when the Apostolic See is totally impeded should not only consider physical or psychological infirmity in the Roman Pontiff, but also force majeur, substantial error or other legal or physical impediments, such as imprisonment, threats, hostage, kidnapping, replacement by doppelgangers etc.., that is, when the Apostolic See is impeded by an outside force or by the inability of the Faithful to know who is the true pope. — As there have been many popes held hostage by Emperors (Napoleon being the most recent one) and many times in which there were rival popes, why these cases were not considered under this heading is bizarrely political. It is political because they do not want to admit the Elephant in the Room, of Pope Benedict XVI not renouncing the munus, only the ministerium, while they proclaim the elephant is in the room by discussing the threats of animals entering, limiting such consideration only to mice.

As their proposed solution, they advocate for a special law whereby the Cardinals could declare the Apostolic See impeded. This is a lousy solution as we all know. Because, what if the Cardinals conspired to oust a pope? Could they not contrive a publicity stunt and manipulate the world into thinking the Pope was not longer of sane mind or sound body, and therefore they declared the See Impeded, and de facto vacante?

Of course they could.

And indeed, that is what they did in February of 2013! when they faked the news of Benedict’s abdication and played word games with the words “resignation” and “renunciation”, “dismissione” etc..

But their solution falls into a grievous error. Because, since the office of pope is not established by men or even by the Church, no authority in the Church could declare a man no longer to be the pope, unless he himself freely renounces the divine gift which makes him pope.  So what these canonists are proposing is heretical and revolutionary in the worst sense of that word.

It would also put the Cardinals in a position of great weakness, because if they could remove a pope by majority vote, then any foreign power could bribe the Cardinals to get right of a pesky pope, and then no pope would ever speak out when necessary if he feared a palace coup would entail.

That this working group really has alternative motives, is quite clear, when they arrive to n. 7 of their proposed project, because there, they urge the publication of an Apostolic Constitution which would rewrite canon 332!

Why rewrite it? — Why to get rid of the legal evidence that Benedict XVI is still the pope, of course. Just as they rewrote canon 1331 to take out the proof that munus does not equal ministerium, after I cited that canon to Msgr. Arrieta and silenced him with it’s incontrovertible distinction: that even one outside the communion of the Church can hold a ministerium.

The zeal with which these canonists want to make the pope replaceable at will is unmasked with all its viciousness in the first chapter, wherein they call for norms to remove a pope from office if AFTER 10 DAYS a few individuals claim that he can no longer communicate his will.

Do you now how many medical conditions might cause similar situations, which are perfectly curable after a longer time? Have they never heard of a 30 day silent Ignatian Retreat. They must have, as their pope is a Jesuit. I know there has been no time in which he kept his mouth shut for 30 days, but I assure you that there have been Jesuits in history who accomplished it, even those who were not saints.  Does that mean a pope should be removed? It is absurd to even suggest it!

As I read article 4 of this chapter, I nearly puked, as it suggests that the Cardinals within 15 days assemble at Rome out of holy obedience to determine if the impediment is permanent or temporary.  —  Josh, do they not know that there is no obligation of obedience when your superior is impeded!!!!! And cannot command you or even speak with you!!!!

The rest of this chapter reads like a madhouse run somewhere in the present Bergoglian Vatican, with such a strained effort to seem official and dignified in everything, even while discussing something which is contrary to the Divine and Catholic Faith. It is so Anglican, it can make you puke.

By chapter too it is also clear that this entire proposal is an arrogant one. It is arrogant, because it is attempting to transfer the immemorial right of the Bishops and Clergy of the Roman Province to settle disputed questions about the Apostolic See, to the College of Cardinals.  What reason is there for that?

Is this committee terrified that a Provincial Council of the Roman Province exercise its authority?

Indeed, in the introduction, the committee makes a terrible interpretation. In canon 335, where it says that in cases of an impeded see one is to have recourse to special laws for such an eventuality, they ignore that the Latin uses the past perfect participle: that is, it refers not to future laws, but to laws already established.  It is referring to the Apostolic Ordinance which I just mentioned, or at least to canon 440, which regards Provincial Councils.

And that is arrogant and deceptive.  These canons make it clear that when the metropolitan of ANY province is impeded, the Bishops of the province can elect one of their number to convoke the others in council and that such a council has the authority to establish binding regulations for the entire province.

The understanding is clear. This is the special law referred to in Canon 335, not by direct citation, but by inference, for discretion sake, lest an enemy figure it out too easily.

In this chapter the masks fall entirely off. For in this one, the scholars propose to add a third paragraph to canon 332, so that a Roman Pontiff permanently impeded must be regarded to be in sede vacante. It is obvious that they want this reform SO AS TO DECLARE THE RENUNCIATION OF POPE BENEDICT XVI valid POST FACTUM. Which is a juridical impossibility and a logical contradiction.

Oh what a complex web they weave, who first set out to deceive!

Here is the Italian text of their proposed Canon 332 §3:

My translation into English:

If the Roman See become totally impeded through the permanent incapacity of the Roman Pontiff, in such a way that he could not even renounce his office, there should be applied the aforementioned procedure of the special legislation and (these together) will produce by right itself the effects equivalent to those of a sede vacante.”

That is not only very bad juridical language, it is also lousy thought. But I am not going to improve on a crime.

I will stop my commentary for now, having unearthed enough refuse to make me sick for a Saturday morning….

9 thoughts on “Canonists feverish at Turin to explain Impeded See and Renunciation of Popes: Oct. 3-5, 2022”