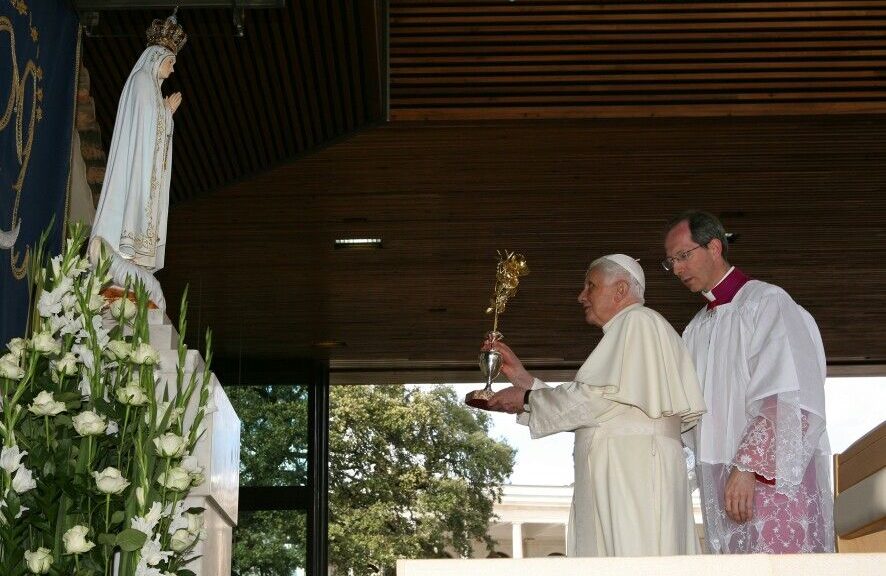 Those who think that Jorge Mario Bergoglio is the Pope of the Catholic Church, believe that he consecrated Russia to the Immaculate Heart of Mary in March of this year.

But as of yet, there has been no conversion of Russia. In fact, Putin is threatening the west with the use of tactical nuclear weapons. Even the president of Ukraine responded with a call for a similar use of such weapons. Poland is asking the USA for nuclear warheads.

Do you see any effect of that consecration?

Padre Pio, of whom it can be certain is a saint of God, said, that the conversion of Russia would take place “in the twinkling of an eye”, not like that of the United States of America, which would take “a long time”.

If you have the simplicity of a true soul devoted to Our Holy Mother, the Mother of Jesus Christ, then I think you can conclude that the consecration never took place.

But all the Bishops participated, Russia was named, the Pope said it.

There is only one assertion in that phrase that can be seriously and legally objected to. Namely, that Bergoglio is the pope.

Because if he was not the pope, the prayer was never made by the one whom Our Lady said it must be made.

And as a matter of fact, we can affirm without  doubt that Our Lady does not recognize that Bergoglio is the Vicar of Her Son, because the Lady who at Cana taught, “Do whatever He tells you!”, certainly would never say that Canon 332 §2 allows a pope to abdicate by renouncing “the ministry I received through the hands of the Cardinals the day I was elected”, as Pope Benedict XVI did on the morning of February 11, 2013 A. D., when the MSM claimed he had abdicated.

Hearing such words, Our Lady, who never minced words or played word games, would She not have said to Herself, “But what about the gift of grace My Son gave you when you accepted your canonical election? What about that?” ?

Well, if you are a simple soul you won’t make any objection, because you can recognize that the argument I have propounded is rock solid, theologically and canonically. But for those who want to burn incense at the altar of Bergoglio or of human respect, or of the altar of some Cardinal, these will experience a burning indignation at my argumentation.

They will first lash out, saying, “How dare you imply I am not devoted to Our Lady of Fatima!”, thus condemning themselves with their own mouths. Because to say that is to imply, that you will hold fast to Bergoglio even if you must deny everything, Fatima included.

Then they will lash out and say, “How godless you are for proposing that Our Lady is not in communion with the Pope!”, and condemn themselves with their own mouths a second time. For, by saying such an absurdity, they admit that they hold that Bergoglio is more certainly and indubitably the pope — though they know this only by hearsay — than Our Lady is faithful to Her Divine Son’s word, ‘He who hears you, Hears Me’ and ‘Whatsoever you bind upon earth, shall be bound in Heaven’, which Our Lord taught expressly in reference to things like Canon 332.2!

Then they will lash out and say, “You are a fool to believe a prayer which had Masonic overtones and invoked Pachamama, as you yourself reported earlier this year, could ever be effective.” And by these words, they will condemn themselves a third time, because by saying that, they will admit that they are in communion with someone who prays to demon goddesses!

Then finally they may desperately resort to the argument, that not all the Bishops in the world joined in this prayer, though they have absolutely no forensic evidence for that but hearsay. And this argument might suit them well, because they follow a man blindly on hearsay to be Christ’s Vicar, when every other data set, including Canon Law, denies that.

I myself think the child-like argument I made defeats all such objections, because it is based on truth AND also because Jesus says that all other kinds of persons are blind.

9 thoughts on “If you believe in Our Lady of Fatima, you must now break from Bergoglio”