The SSPX was the only community that refused to cooperate in a major sex abuse probe in France, denying requests to open its clergy archives. Its actions were the opposite of French dioceses, casting doubt on the Society's commitment to transparency.https://t.co/hJXsyehnJW

Editor’s Note: If you or a loved one has been sexually abused by a SSPX priest in France or anywhere else, you can notify victims-help groups such as this one, here below. — According to my informants, pedophilia in SSPX institutions is off the charts and has been so since the 70’s. — In my opinion, this has to do with the fact that the “Traditionalist” Movement is in large part a Gladio operation organized by the CIA and Nazi Ratlines and is NOT an authentic movement sponsored by the Holy Ghost. This also explains why the SSPX and nearly every TLM group clings to Bergoglio like a lover, and hates Benedict XVI who expelled more than 500 pedos from the priesthood. — The SSPX also has shut down nearly 90% of all the Latin Mass centers in the world, as they persue a policy of infiltation, take over, liquidation and consolidation as well as mind-control and harassment the world over. 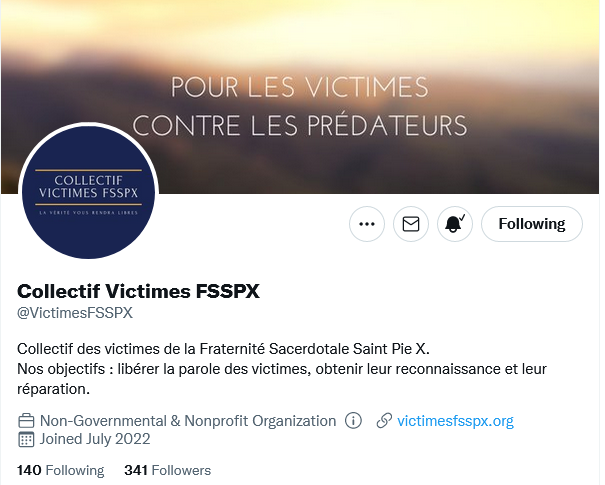 A newly established collective of SSPX abuse victims are speaking out -- and demanding answers.https://t.co/IheLv3mbX3

10 thoughts on “FRANCE: SSPX only ecclesiastical group which refused to cooperate in Pedo-Investigations”