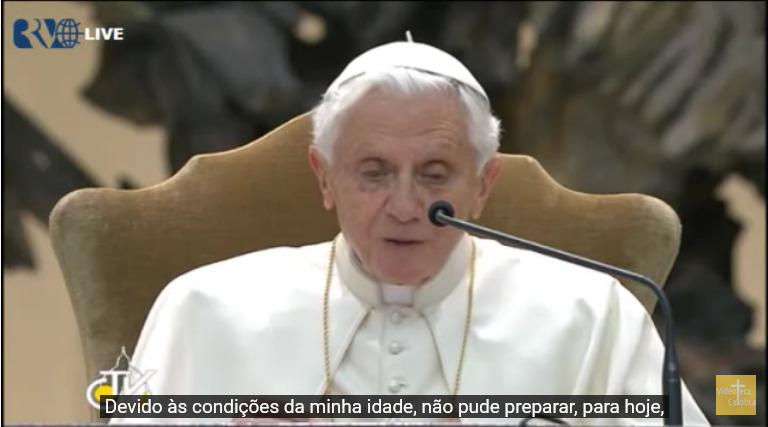 HOLY FATHER’S ADDRESS TO THE PRIESTS OF ROME

For me it is a particular gift of Providence that, before leaving the Petrine ministry, I can once more see my clergy, the clergy of Rome. It is always a great joy to see the living Church, to see how the Church in Rome is alive; there are shepherds here who guide the Lord’s flock in the spirit of the supreme Shepherd. It is a body of clergy that is truly Catholic, universal, in accordance with the essence of the Church of Rome: to bear within itself the universality, the catholicity of all nations, all races, all cultures. At the same time, I am very grateful to the Cardinal Vicar who helps to reawaken, to rediscover vocations in Rome itself, because if Rome, on the one hand, has to be the city of universality, it must also be a city with a strong and robust faith of its own, from which vocations are also born. And I am convinced that, with the Lord’s help, we can find the vocations that he himself gives us, we can guide them, help them to mature, so as to be of service for work in the Lord’s vineyard.

Today you have professed the Creed before the tomb of Saint Peter: in the Year of Faith, this seems to me to be a most appropriate act, a necessary one, perhaps, that the clergy of Rome should gather around the tomb of the Apostle to whom the Lord said: “To you I entrust my Church. Upon you I will build my Church” (cf. Mt 16:18-19). Before the Lord, together with Peter, you have professed: “You are the Christ, the Son of the living God” (Mt 16:16). Thus the Church grows: together with Peter, professing Christ, following Christ. And we do this always. I am very grateful for your prayers, which I have sensed, as I said on Wednesday – almost palpably. And although I am about to withdraw, I remain close to all of you in prayer, and I am sure that you too will be close to me, even if I am hidden from the world.

Here we have one of the strongest testimonies that Pope Benedict XVI had no intention at all of abdicating the Papacy. Ignored for 9 years this talk to the Clergy of Rome, just 3 days after his Declaratio of Renunciation is a key to understanding the true sense of those words and their impact on the Church.

One of the first things one notices, when watching the video, is that the Holy Father is having difficulty moving, that he is stiff, and that he does not turn so freely to speak or look at others. Is it arthritis, or is he tired of all the fake adulations he has received during the first 8 years of his pontificate?

His hair is unkempt, and to me that shows that all those around him had the deepest contempt for him, because no one with any sense of the dignity of the Roman Pontiff would let him appear in public with unkempt hair. Perhaps I am prejudiced by the fact that my maternal grandfather was a barber, but knowing how obsessive Italians are with their personal appearance before they go into public, I think I am correct in this estimation.

I find it a strange reaction, that the clergy should clap, if they think he has just abdicated. It is as if they wanted him out and are glad that he decided to surrender.

Then at the end of the applause some priests shout in unison: Long live the Pope! — Something you would not shout if you thought he was not going to be pope for the rest of his life, would you? Or perhaps they think they are at a soccer game. I have a higher opinion of the clergy of Rome, but perhaps I am wrong.

In the translation by the Vatican, there is an important error, that I noticed immediately. Where the Holy Father, at about 6:30 into this video, the Holy Father does NOT say, as the Vatican would have us believe:

And although I am about to withdraw, I remain close to all of you in prayer, and I am sure that you too will be close to me, even if I am hidden from the world.

But rather, says (my English translation):

Even if I retire in prayer, I am always near to all of you, and I am sure that you will always be near to me, even if for the world I am hidden.

Here we have one of the first signs that the Vatican was playing with the words of the Holy Father. A game of deception they have been playing all these nine years. And for which reason, Benedict XVI knowing this has to speak in code to get his messages out, through the censorship of a devious and deliberately false translation.

Because as can be seen from my translation, it is obvious that Benedict XVI is avoiding the word “abdicate” and “renounce the papacy” and is making it quite clear that he is continuing being the Pope, but not in a way the Globalists and Freemasons will recognize.

Also, by saying “vicino” in Italian, which could mean either near or close, he is using an amphibology to indicate that he will remain in the Vatican, and that the true Catholic clergy of Rome will remain under his jurisdiction, that is, in communion with him as the Pope.

This sheds light on the beginning of his discourse, where he says that it is “opportuno”, that is “opportune” or in the Latin “necessary” that the clergy of Rome visit the Tomb of St. Peter and confess his faith in the Son of the Living God. This is a warning of what was to come and a sign that the Apostolic See would be impeded, because the clergy could not visit him, but only go so far as St. Peter’s Basilica.

But the Vatican translation hid that, by translating “opportuno” as “appropriate”.

As he continues, he ironically remarks, as a further hint to those listening with honesty and faith, that his health does not permit him to give a long discourse, and then proceeds to give a long discourse! Thus signalling that what he said about his health being the reason for his renunciation of ministry just days before, was not to be understood as his motive for saying what he said.

I make other observations in my first article about this meeting with the Clergy of Rome, nearly 3 years ago, here.

But though many have their own opinions about why he did what he did, no one can deny that he has explicitly avoided any reference, for 9 years, to an abdication. Indeed, he wears white every day to shout out, that he retains the papal dignity.