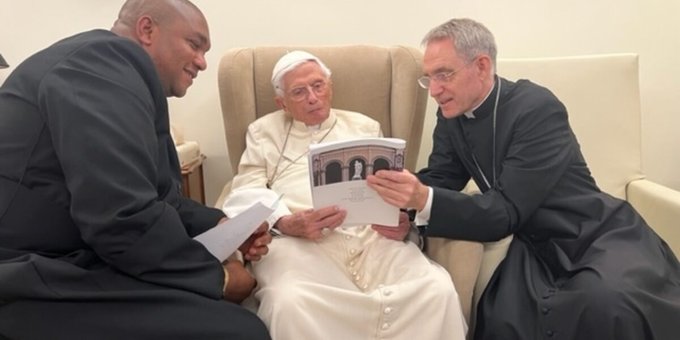 Many Catholics, scholars and clergy among them, have urged me to write Archbishop Georg Gänswein since he telephoned me back in January 2020 A. D..  Having thought about this for a long time and prayed over this decision, I chose to write the Archbishop on the 105th Anniversary of the Miracle of the Sun at Fatima.

I did this because, after the revelations of the contents of his phone call to the brother of Father Gebhard, I could not help comparing it to the tone he used in the phone call to me (which I did not receive, but which ended up on my cellphone as a voice message, which I have archived for historical reference).

I had been persuaded by Andrea Cionci for a long time to consider the Archbishop an ally in the restoration of Pope Benedict XVI. But with the recent revelations, I have abandoned that position, and returned to my former conclusion, namely, that Pope Benedict XVI and Archbishop Gänswein have two different views of what happened on Feb. 11, 2013.

Here is the text of my letter. I encourage all the faithful to write their own letters, in a charitable spirit and tone, to help the Archbishop see how grave is the damage being done to the Church by the confusion generated.

While I think the Holy Father was right to use subterfuge to protect the Church, I think the time for that has passed and now we need clarity.

I have published my letter today, because in it I make no request which requires a response. And because, if there is any good will to hearken to my plea, it was already put into action after these 12 days. If not, the publication of my letter will encourage that. (Please note that the original did not contain links) – Radio Rosa Mistica has read this letter in their own Spanish translation, here; however it characterizes my letter as if I am asking who is the true pope, which is what I am obviously not doing.

105th Anniversary of the Miracle of the Sun, Fatima

I am writing you after a long pause, on account of my desire to think and pray over the message you left on my cellphone in January of 2020, as I lay sick in bed with a very bad cold.

Subsequently, I have not found any sound counsel from those whom I asked about how to respond to your request.

I have also been greatly scandalized by the claims made in the press, afterwards, that those who have wanted to write and meet with the Holy Father, Pope Benedict XVI after his canonical election or in the last 9 years were, in their opinion, impeded by your intervention.

I too would like to write the Holy Father, but I first want to respond to your phone message, so that there might be peace between us.

Yes, I am a nobody. I am a layman, not in orders or under public vows. But as I have spent more than 12 years working on a critical English translation of St. Bonaventure’s Commentarian in Quatuor Libros Sententiarum Magistri Petri Lombardi, I know something about the need, in human communications, of using terms precisely, and I recognize that when ever two parties are communicating with brief phrases, it often happens that misunderstandings arise, since they  often each have entirely different personal experiences and habits of linguistic expression.

This is all the more true when our native languages differ.

And for that reason, I have had many occasions to rethink what I was trying to communicate to the Holy Father in my Scholastic Question which I mailed him in the winter and spring of 2019, as well as in my letter in December of 2019, which you responded to by phone, when you attempted to speak with me in person.

Moreover, as I hold a B. A. in Cultural Anthropology, I have rethought my questions as a archeologist might do, by wiping away all my presuppositions and ignoring what others say about the events of Feb. 11, 2013 and thereafter and before. And I have tried to devote myself to a very careful study of the historical events, before I ask other questions.

I have come to understand, as do many, that the Holy Father never intended to renounce the petrine munus, but only the petrine ministerium, and that, yes, thus, it can be said that his renunciation is valid, even though, there cannot be found in the Codex Iuris Canonicis of 1983, a juridical or administrative act called renunciatio ministerii.

This is perplexing not to only myself but men of the highest character and learning. For that reason, there are many of us who would like to have the opportunity to sit down with the Holy Father and ask him whether he intended an ABDANKUNG or only a RUECKTRITT, because for those of us who have some fluency in Latin, we are desiring to understand what the Holy Father intended when he wrote declaro me ministerio renuntiare, namely, which of these German concepts he was proposing, or even whether he was intending to renounce the Petrine VERANTVORTUNG, which my investigations and study lead me to regard as the proper translation of the Latin, munus, in modern German.

I propose by this letter of mine, that the Holy Father in his paternal solicitude for the Flock of Christ, many of whom are deeply confused about which of the two popes, Benedict or Francis, hold the petrine munus, to grant an audience to answer in public such pertinent questions.

I understand that no one may consider me worthy to attend such a meeting, but I do realize that the Church has come to a point in Her history, when the Holy Father must before witnesses give an answer to such questions, and if not in private, at a Provincial Council called for this purpose by the Ordinaries of the Province of Rome, so that the entire Church in fully ecclesial and canonical act, can come to a common understanding of what the Holy Father has done, what it means, and how the faithful are to regard it.

I fear – and not only I, but thousands of the faithful – that if such a clarification is not given in the lifetime of the Holy Father, the Church will see worse days ahead and experience another Great Schism with lineages of popes who regard each other as illegitimate, since canon 40 and canon 41 give them the right to disagree about papal acts which are confusing in their interpretation.

And so I write to you this letter, because I believe that you are not only the only person in the crucial place to avert such a catastrophe, but that you possess all the personal virtues to understand in prayer how great a good this would be for all parties involved. You also hold a Doctorate in Canon Law, so I am certain the argument I have presented here is clear to you and easily understood.

20 thoughts on “Br. Bugnolo appeals to Archbishop George Gänswein for the love of God”