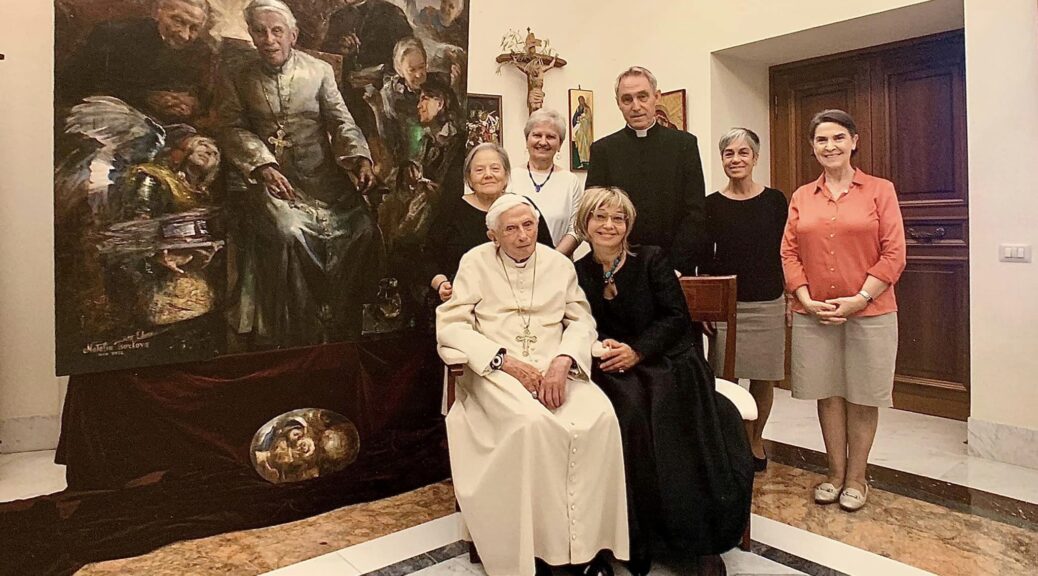 The gratuitous assertion that Pope Benedict XVI intended to renounce the papacy, by means of renouncing the Petrine ministerium, is absurd on the face of it, as is demonstrated from his Homily on May 7, 2005, when he began his pontificate

This argument is gratuitous because, so far, no one has attempted to prove it.

But there are ample counter proofs, which have been drawn into light by the investigations of Andrea Cionci, Attorney Acosta, Father Kramer and myself, that Pope Benedict XVI considers himself still the holder of the Papal Authority, even if one were to ignore what his own eyes see, that the Pope dresses as the pope now for 9 years running.

Here we must remember, that the Catholic world is victim of a psyop.  A psyop is the term in military warfare for a deception to make your enemies not see what they see.  And that is what was pulled off on Feb. 11, 2013, as I explained in the documentary, A Message in a Bottle. For the whole world says Benedict XVI abdicated, though Benedict XVI never did anything of the kind.

For Pope Benedict XVI on that day, said, “I declare that I renounce the ministry [ministerio] which was committed to me by the Cardinals on the day I was elected…” (source and translations here)

But Canon 332, section 2, requires that a pope renounce his munus, to abdicate validly.

And that Pope Benedict XVI does not consider the munus of the office of the Pope (petrine munus) to be simply identical with the ministry of the Pope (petrine ministerium) can be seen from his Homily on May 7, 2005 A. D., for the Celebration of his taking possession of the Lateran Basilica, as the Bishop of Rome, a most solemn moment, at the start of his papacy.

For in that homily he spoke these words in Italian (Vatican.va):

Which words regard the power of the Papal Office, and which I translate into English, thus:

This power of teaching frightens so many men, inside and outside of the Church. They ask themselves whether this is not a threat to freedom of conscience, whether it be a pretense [presunzione] set against the liberty of thought. It’s not like that.  The power conferred by Christ upon Peter and upon his successors is, in an absolute sense, a mandate to serve [mandato per servire]. The power to teach, in the Church, conveys a commitment to service [impegno a servizio]. The Pope is not an absolute sovereign, whose act of thinking and willing [pensare e volere] are law.  On the contrary: the ministry [ministero] of the Pope is a guarantee [garanzia] of obedience to Christ and to His Word [Sua Parola].  He ought not proclaim his own ideas, but rather bind himself and the Church constantly to obedience to the Word of God [Parola di Dio], in the face of every temptation to adapt and water it down, in the face of every opportunism.  This did Pope John Paul II do, when, facing every temptation, apparently good-willed toward man, in the face of the erroneous interpretations of freedom, he underlines in an unequivocal manner the inviolability of the human being, the inviolability of human life from conception until natural death.  The freedom to kill is not a true freedom, but is a tyranny which reduces the human being to slavery.  The Pope is conscious of being, in his great decisions, bound to the great community of the Faith of all times, to the binding interpretations grown up along the pilgrim path of the Church.  In this manner, his power is not above, but is at the service of this Word of God, and upon him there is incumbent the responsibility to make sure that this Word continues to remain present in its greatness and to resound in its purity, such that it is not broken into pieces by continual changes according to fads.

To unpack the teaching of the Holy Father on munus and ministerium, one needs to look carefully at the above text, and see how the Holy Father uses different phrases to express himself in Italian.  Here I list them:

The power conferred by Christ upon Peter and upon his successors is, in an absolute sense, a mandate to serve [mandato per servire].

The power to teach, in the Church, conveys a commitment to service [impegno a servizio].

On the contrary: the ministry [ministero] of the Pope is a guarantee [garanzia] of obedience to Christ and to His Word [Sua Parola].

In this manner, his power is not above, but is at the service of this Word of God, and upon him there is incumbent the responsibility [responsibilità] to make sure that this Word continues to remain present in its greatness and to resound in its purity…

Here I remind those who do not know Latin well, that there are 3 Latin terms used in Canon Law for governance: mandatum, munus and ministerium.  In regard to the Papal Office, the mandatum is given by Christ.  This mandatum regards the twofold command that Christ gives to Peter: feed My sheep and lambs (John 21:15) and confirm your brethren (Luke 22:32 – Cited by the Holy Father in the previous paragraph of his Homily). The munus is that which Peter receives by Christ in these commands. It is the charge of authority, to exercise the power, and the responsibility to execute the commands. The ministerium is that which Peter does when executing the commands.

But, in the Holy Father’s native language, German, the words: munus and responsibility are the same word, Verantwortung.  Canon 145 reckons every office [officium, ufficio, Amt] to be a charge [munus, incarico, Verantwortung].  But canon 332 §2 requires that a Pope renounce his munus.

Now, Italian has a word, impegno, which has no exact equivalent in English. Above I translated it as commitment, but it could be translated charge, obligation, or duty. Indeed, in German it is often translated by Verpflichtung which is a synonym for Verantwortung! So I think it is safe to say that by “commitment to service” the Holy Father is signifying or at least referring to the munus ad ministrandum in the Latin.  And garanzia in Italian [Garantie in German] means the assurance of the fulfillment of an impegno! — Thus in Italian, it is indisputable that the Holy Father sees the ministerium to be distinct from munus, just as it is in German.

From all this it is clear that in the mind of Pope Benedict XVI, from the very first days of His Pontificate, he understands the distinction between munus and ministerium and does not consider them identical concepts or words which mean the same thing. Because every human being using different words to signify different things, recognizes that the difference of the things signified is the cause of the difference of the words.

CREDITS: The recent image of the Holy Father, standing in front of the new painting was published from here.