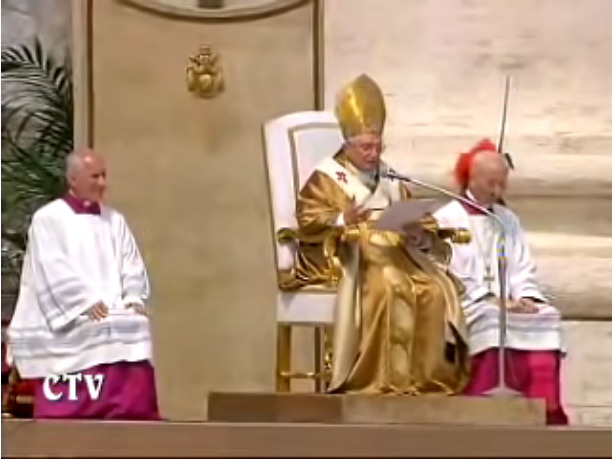 Most Catholics have heard of the 4 signs of the true Church: that She is One, Holy, Catholic and Apostolic.

One, that is,  united under the Vicar of Jesus Christ, the Successor of St. Peter.

Holy, that in union with them they remain dedicated to the service and worship of the Triune God, not anything exclusively earthly.

Catholic, that in union with him in holiness they profess the same Faith which has ever been held in all places and times.

Apostolic, that in union with him they hold fast to the Scriptures, Tradition and customs which the Apostles of the Lord Jesus handed down to their spiritual posterity.

And thus it is today, that we can distinguish the true Church from the false:  The Catholic Church in communion with Pope Benedict XVI, who according to every Canon of the Code of Canon Law is the legitimate and only successor of St. Peter alive; and the anti-Church, in communion with Jorge Mario Bergoglio, who pretends to the dignity of a Pope Francis, and who according to every measure is a public manifest and formal heretic, schismatic, and high priest of the Satanic religion of Globalism.

The differences could not be more clear. They are becoming more and more every day.

And though I have had my disagreements with Ann Barnhardt in the past, I can agree with what she has observed this week: that it is totally irrational to insist Bergoglio is the pope, while insisting you must be in schism with him.

Don’t follow the counsel of confused and false apostles, who are denying the supremacy of Papal Power (like Cardinal Burke), or the habitual protection from error of the Pope (like Bishop Athanasius Schneider), or who are calling the entire Church in schism (Archbishop Viganò).

That crowd ignores the sound judgment of true successors of the Apostles such as Bishop Rene Henry Gracida, who recognizes that Bergoglio can not have ever been the true pope since he lacks the charism of infallibility, or like Archbishop Pawel Lenga, who recognizes that Benedict XVI has always remained the Pope and that Bergoglio is a manifest heretic.

We who stand with Pope Benedict XVI accept the Scriptures, Tradition, the teachings of the Magisterium, and the sound disciplines handed down from the Apostles. And we totally reject globalism and the instrumentalization of our holy religion to serve that wicked agenda.

Stand with them, many other bishops, and all the priests and religious and laity, who remain faithful to the terms of Canon Law and recognize that Benedict XVI is the Roman Pontiff and Vicar of Christ, and the head on earth of the only true Church, the Catholic Church: one, holy, Catholic and Apostolic.

25 thoughts on “4 Signs of standing with the True Pope: One, Holy, Catholic & Apostolic”