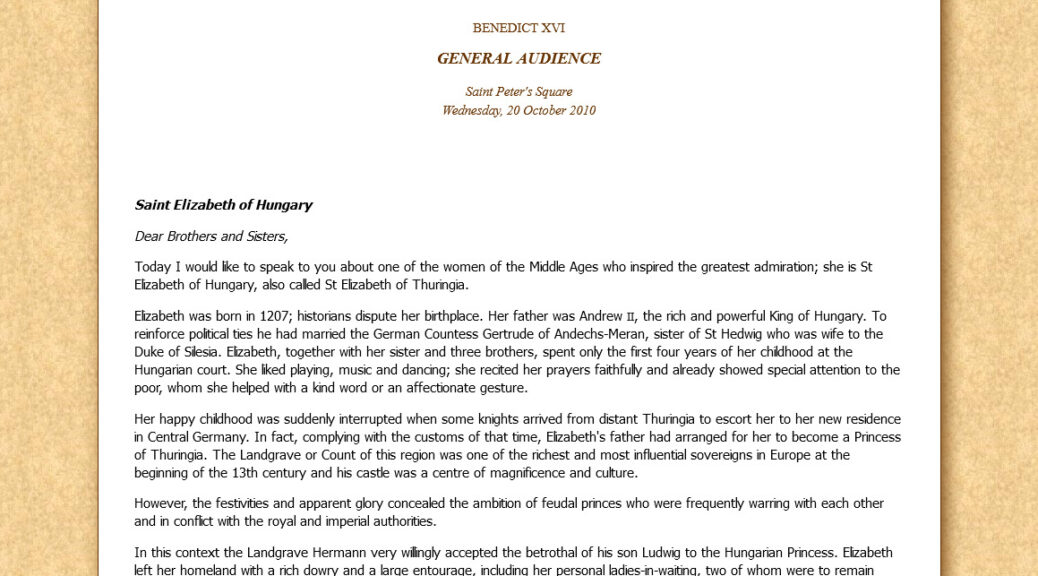 On Oct. 20, 2010, Pope Benedict XVI during his Wednesday Audience spoke about the trials suffered by Saint Elizabeth of Hungary, who was the wive of the Landgrave of Thuringia, and should have inherited his rule, was cast aside by a cousin, who usurped the throne of the Landgravate.

Here is what he said on that occasion, from the official English translation of his original discourse in Italian, from the Vatican website:

However, another trial was lying in wait for Elizabeth. Her brother-in-law usurped the government of Thuringia, declaring himself to be the true heir of Ludwig and accusing Elizabeth of being a pious woman incapable of ruling. The young widow, with three children, was banished from the Castle of Wartburg and went in search of a place of refuge. Only two of her ladies remained close to her. They accompanied her and entrusted the three children to the care of Ludwig’s friends. Wandering through the villages, Elizabeth worked wherever she was welcomed, looked after the sick, spun thread and cooked.

During this calvary which she bore with great faith, with patience and with dedication to God, a few relatives who had stayed faithful to her and viewed her brother-in-law’s rule as illegal, restored her reputation.

The parallels with what happened to him in 2013 and has suffered since then are unmistakable.

I wish to thank the author of @MiScrivoaReligione on Youtube for this most excellent find!

That was when Pope Benedict VIII reigned.

And so, it is entirely possible that this discourse on St. Elizabeth WAS A SIGN TO THE WORLD OF WHAT HE WAS ABOUT TO DO, to defend against THE FREEMASONS IN THE CHURCH, and that he had contemplated this from as early as October 2010 A. D.!