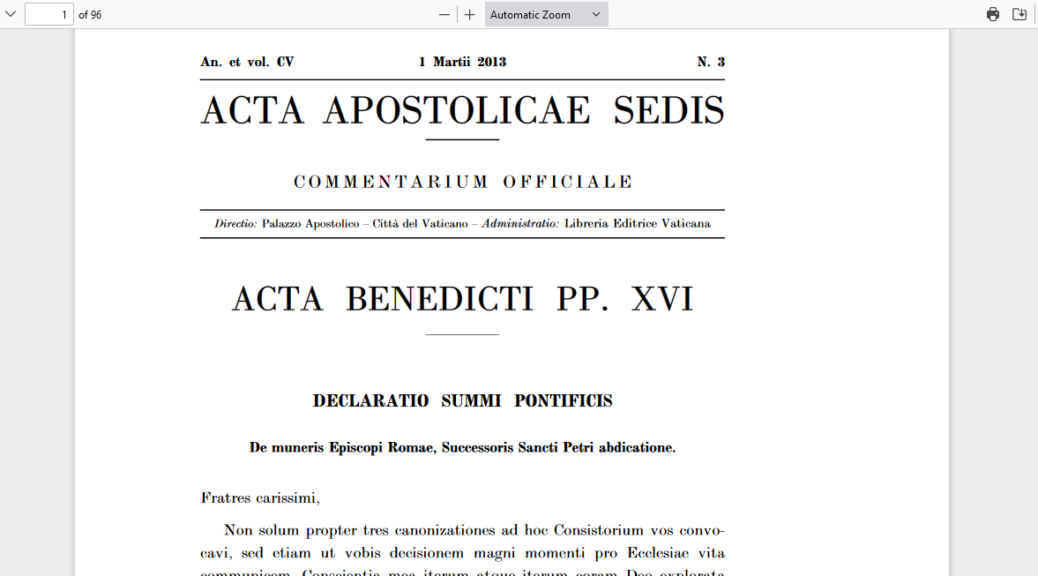 If there is one thing that is delightful about the allies of Bergoglio, is that when they actually do attempt to prove his claim to the papacy is legitimate, then they succeed only in discovering more proofs that it is not! They do the work for us! We must praise and thank God for them, really!

Such a gift-wrapped Advent present was mailed out about an hour ago by Don Tullio Rotondo, a Catholic priest from Gallo Matese, Italy, who on Twitter and Youtube is invoved in a skirmishing war with Andrea Cionci, over every aspect of Bergoglio’s claim.

This new present is what Andrea would call an “autogol”, the word Italians shout at a soccer match, when a team puts the ball in their own goal! It is considered the most embarassing thing that any Italian can do.

Since, Don Tullio Rotondo has gone to the lengths of finding the Declartio of Pope Benedict XVI in its official Latin version in the Acta Apostolicae Sedeis at the Vatican Website, to prove that the Holy Father is no longer the pope.

And what did he find?

(Click on the image above to read Don Tullio’s discovery
and get the link to the PDF from the Vatican Website. I will embed that same PDF below for historical record.)

He found an entry dated March 1, 2013 with the act bearing this title in Latin:

If you know a little Latin you can understand what is up, but I will translate for all my readers who do not:

ACTS OF THE PASTOR OF PASTORS, BENEDICT XVI
DECLARATION OF THE SUPREME PONTIFF
On the abdication of the munus of the Bishop of Rome, Successor of St. Peter.

The autogol here, is, this: that it is the very definition of counterfeit product, that a piece of merchandise bears a label which does not correspond to the contents of the product. And here we have a glaring example of that, since the Declaratio of Pope Benedict, which then follows — which appears to be the authentic text — does to contain the verb, “to abdicate”, nor any object of a verb for renounce which is “munus”.

So, what is going on?

Surely an official legal journal would put a proper title on the document? Yes.

But surely a proper title would list the act as a juridical act, which is binding? Yes.

But to do that, the title has to name a juridical act in the Code of Canon Law of 1983.

The only title one could put would be, “De muneris … renuntiatio”. Since that is mentioned in Canon 332 §2.

But there are no such words in the Act.

Thus, if there was good will, the title would simple reflect that. But then, there would be no reason to put it in the AAS, which is not for announcements .. those go through the Vatican Press Office.

So, to perpetrate a fraud, the AAS which is published 3 months after events, was falsified some time in April of 2013 with the insertion of this Declaratio under a bogus rubric or title.

But the fool who wrote this, did not know his Canon Law, because there is no such act of abdication in the code. The verb is renunciation. He also erred in that he said this abdication regarded the Bishopric of Rome. But that is not the correct legal appellation, which is the Apostolic See.

But no one would make such mistakes UNLESS they knew beforehand that the Declaratio SHOULD contain the words, “me muneri … renuntiare”.

So, in making two errors and one lie, they also revealed malice of aforethought and confessed they knew the act was invalid!

And the man in power at the Vatican when this falsification was published, was none other that Jorge Mario Bergoglio, Cardinal of Buenas Aires. So the crime is directly imputable to him.

But the publication of this falsification, which received NO contradiction in public from ANYONE in the Roman Curia, means that they were all IN ON THE CONSPIRACY against Pope Benedict XVI: they have always known and understood that he remained the pope and that Bergoglio was a usurper.

This is why they are totally silent, have been, and intend to be such, as long as they can keep this fraud going.

Thus, it is incumbent on all of us, to shout it from the roof tops!

Saving this PDF for the future trial of these rebels against the Roman Church.

8 thoughts on “Bergoglio began his reign with intentional fraud”