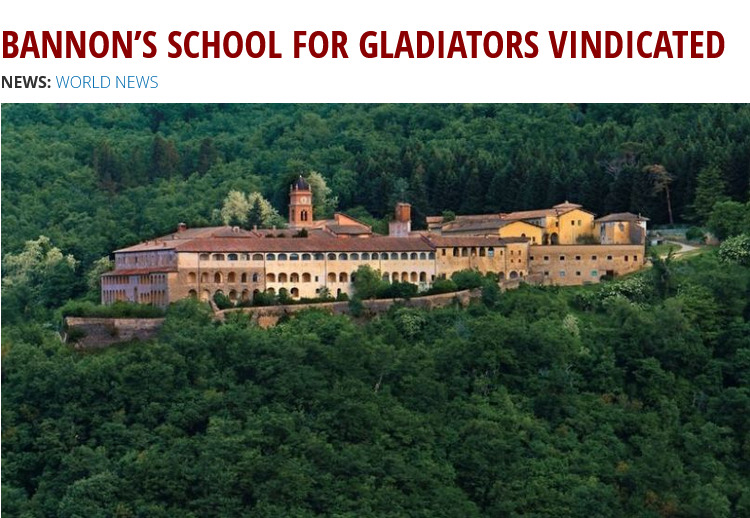 Editor’s Note: Steve Bannon, who was pardoned by President Donald Trump (Skull and Bones) for embezzling funds to build a wall to protect the US Southern Boarder from illegal Catholic/Christian immigrants, successfully defended his consortium against fraud charges in Administrative Court, in Lazio, Italy, this week.

Bannon’s consortium, without the proper participation of experts in restoration and conservation, and without paying any notable fees, obtained a 99 year lease on the Monastery in a public bidding process, which required at least a 10 or 30 Million investment. No monies have yet been invested, to my knowledge.

I do know this, that in Italy, if a monk attempted this he would be thrown out the door for attempting to “appropriate a cultural site for personal use”.

Bannon’s successful defense means that this ancient Catholic Monastery has now fallen into the hands of the Satanic Mass-Murdering Lodge from Yale. It will be dedicated to “defending the Judeo-Christian Civilization of Europe”.

I will wager that it will be used to train political operatives of Skull and Bones to neutralize any restoration of Christendom and guarantee that the continent converts to Satanism and the religion of the Anti-Christ. This is highly likely, because Trump cannot even stand Catholics, as his recent insult of the GOP Governor of Florida shows.

The title of this article at Church Militant is, therefore, perhaps truer than it appears, since gladiators were pagan mercenaries hired to entertain the masses, so that the masses could be kept under control, by godless emperors.