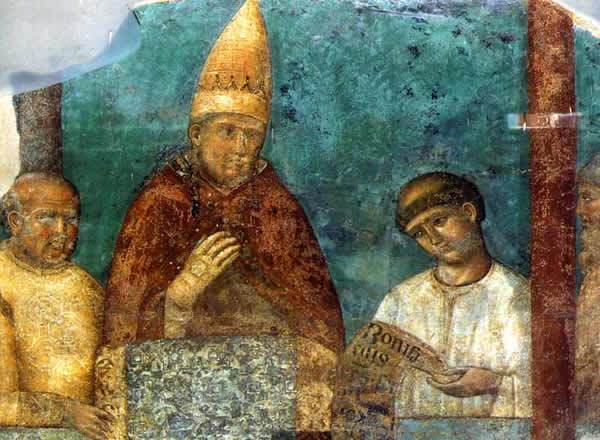 At present, in the Vatican, there are two persons whose followers call, “the Pope.” I will leave aside the fact that one of them ordered the Annuario Pontificio to no longer call him the pope, but that’s too great a fact to convince one party that something is awry in the Vatican City State.

For this reason, FromRome.Info has been featuring news about the Vatican since it was launched more than 8 years ago. And in that time I have published a good number of articles about the controversies over the Conclave of March 2013 and the Renunciation of February 2013. You can find extensive collections of articles about each, under the rubric, Team Bergoglio and The Renunciation of Pope Benedict.

Now, as regards the latter, FromRome.Info was the first and only site to publish an English translation of the Rescript of Pope Boniface VIII about papal renunciation, which is the foundational historic document in the tradition of Canon Law. In that article, I briefly mentioned the crucial textual problem which led the Code of Canon Law of 1917 and that of 1983 to use the verb, “renuntiare”, to renounce, rather than “resignare”, to resign.

But in the source for this Rescript, one finds a lot more, and that is what I will now publish, because those who sustain Bergoglio is the pope often make wild unsubstantiated claims that the tradition of Canon Law is in their favor. And this is clearly not so.

First, as regards questions of law, one cannot appeal to traditions of law, unless they regard the same legal concept. Now, when concepts regard legal acts, one must have recourse to the rules of verbal signification first of all to clarify the nature or essence of the legal act about which one is speaking. One classifies things according to genus and species. The genus is the common notion of all the things which are of the same formal reckoning, but the species is the notion which applies only to more restricted classifications of those things. So the genus is dog, but the species is a German Shepherd. Notice, that here I am not speaking according to biology, but according to logic. Because biologically both German Shepherds and dogs are both of the same species.

Thus, in the Sixth Book of Decretals, published by Pope Boniface VIII, papal renunciation is found under Book I, Title VII, “De Renunciatione”, that is, “On Renunciation”, without any specification.


Above I offer you the opportunity to read or download the 225 MB PDF which contains the entire Sixth Book of Decretals. In this way, you can follow the discussion below, where I will transcribe and translate the sections I refer to. I will be quoting from PDF pages 108-9, or columns 197-200 in the original work.

As I have already published Chapter I, here, I will proceed to transcribe and translate Chapter II, which is very interesting in regard to the present controversy.

If, you when expecting a prebend and/or dignity, to be vacated in any church on Apostolic authority, anyone holder of a lesser prebend or dignity in that regard,  fraudulently renounces it, so that the first thus vacated, precludes you by way of per consequens to obtain another greater prebend, and/or dignity, which through the death of someone, and/or otherwise in the church itself is believed verisimilarly to be about to be soon vacated: through a renunciation of this kind (so long as it appears under the aforementioned fraud, at least through some probably conjectures: that according to the time of the said renunciation, the one who held the greater prebend and/or dignity, was held back by grave infirmity: and/or something else was pressing, on account of which the vacating of his prebend, or dignity was probably believed to be imminent) We will that no obstacle interpose itself, by which you under the aforesaid (Apostolic) authority (when a prebend and/or aforesaid dignity be thus fraudulently renounced), may freely seek, as due to you, and have, the aforesaid greater one, when it has happened that it and/or the other has been vacated beforehand.

Otherwise, if there be conferred upon the aforesaid renouncer a prebend and/or dignity of this kind perhaps greater: by this very fact the said fraud is to be understood to be proven: and the same one renouncing lacks entirely the one had, and its appurtenances.

First, note that a prebend, according to the Oxford Dictionary, is “the portion of the revenues of a cathedral or collegiate church formerly granted to a canon or member of the chapter as his stipend”, though here I believe it is intended in a wider sense of any benefice, that is, office held out of authorized grant from a superior. A dignity is another word for title.

As is clear from this passage, then, when the Holy Father grants an office to a cleric, as a successor to one who is about to or is to be expected soon to renounce that office, to make it available to the new nominee, if the renunciation of the office by the previous holder be fraudulently done, then the new nominee can still take possession of it.

What is fraud in a legal act?

And here, let us keep in mind, that “fraudulently done” means that the juridical act, in its doing or positing, has been intentionally done invalidly. It is called “fraud” because in jurisprudence, a legal act ought to be an act which is valid according to the law. To craft an act, which appears to be juridical, but which is invalid in of itself, because of its non conformity with the law, AND do to this intentionally, is thus a fraud.

Why did Gänswein’s deny that the Declaratio is a pretext?

This may seem to be a very unimportant legal concept, but actually, it explains the will behind the illegal usurpation of the Papacy by Bergoglio, because his supporters regard the renunciation of ministerium rather than munus, as done by Pope Benedict XVI, to be merely a fraudulent way of renouncing, and on the basis of that groundless assertion, are holding that Bergoglio has the right to take possession regardless of the legal error in the Declaratio.

But they never speak of this, in my opinion, because if they did cite such a legal reasoning they would have to admit that a renunciation of ministerium is not legally appropriate or valid.

I believe that Archbishop Gänswein referred to this theory of theirs when, in his phone call to the brother of Father Gebhard, in September, he expressly denied that the Declaratio of Pope Benedict XVI was a “pretext”.  Because a pretext is a fraudulent reasoning or explanation for one’s actions. Thus by denying that it was a pretext, the Archbishop, who holds a doctorate in ecclesiastical jurisprudence, is affirming that the act is a valid act, not done to pretend to be something other than what it is.

Andrea Cionci, thus, in interpreting everything else in the phone conversation as Ratzinger Code for approbation of what the priests, especially Don Minutella, were doing, in asserting Benedict XVI was still the pope, happily also interpreted this phrase correctly. But the meaning was even more profound, as I hope the above exposition now shows.

Also, in the often quoted statements of Pope Benedict XVI, where he gives great emphasis to the validity of his act, he likewise attests that he did what he did freely. The legal consequence of such testimony — which Bergoglians claim means he validly resigned the papacy (changing the object of the verb like con artists) — is to safeguard against the claim that the act was invalid, and thus a subterfuge, and thus fraudulent.

The Legal Strategy behind claiming the status of “Pope emeritus”

Not to be overlooked here is that Pope Boniface VIII says above that the claim of another office by the one renouncing is ipso facto proof of fraud in an apparently invalid renunciation (cf. 2nd paragraph in translated text: “Otherwise ….”). This explains, in my view, why the Bergoglian canonists are so feverish over establishing the canonical status of a Pope emeritus.  They need to make it an actual office, so that they can claim that Benedict XVI de facto resigned the papacy!

And thus we see the absolute legal brilliance behind what Pope Benedict XVI did, because his renunciation of ministerium is perfectly valid, and by claiming the status of Pope emeritus, which is a non existent office, and can only mean that he remains the pope, he prevents anyone conferring upon him another office or dignity, by which conferral they could claim he has renounced the papacy!

This is the legal equivalent of castling your King in a game of fourth dimension chess!