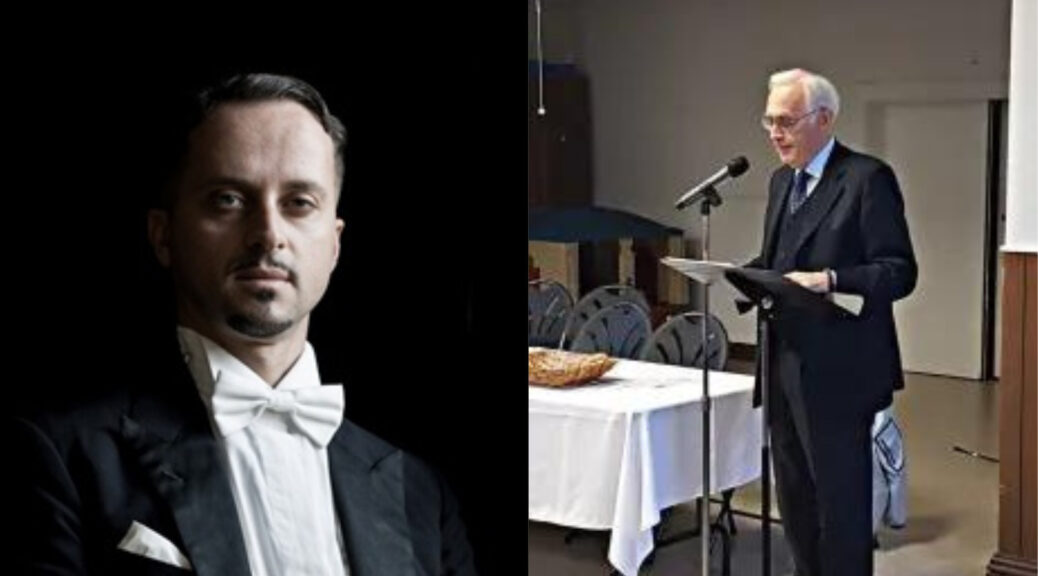 Ever since Dr. Andrea Cionci, one of the renowned experts on the methodology of pedagogy in Italy, came to understand that Pope Benedict XVI was not being listened to carefully, he has blazed a path for all others to follow with a precise and wide-range investigation into the precise meaning of what the only native German speaking pope since Pope Victor II (1055-1057 A. D.) is trying to say.

As a translator, I know that most modern translations are worthless, because they are done hastily by persons who have little academic formation and almost never have any studies to make them careful listeners when it is a question of a speaker or writer whose culture and erudition go beyond the normal. Dr. Cionci kept that in mind and thus finally opened up the understanding of what the Holy Father has been trying to tell the world for nearly 10 years.

But Dr. Cionci, who merited a Knighthood from the Italian Republic for his invention of a pedagogic method, used in Italian public schools for its wonderful efficacy, has also blazed a trail in apologetics, by his earnest, sincere and longanimity in engaging other famous, erudite Italian scholars and writers on the question of who is the true Pope and how can this be demonstrated by facts, laws and documents.

This year, he has written open letters to many scholars, asking them to at least take a look at the encyclopedic collection of evidences which show that Pope Benedict XVI has never intended to resign the papacy, did not in fact renounce the petrine munus, does consider himself the only true Pope, and does not recognize Bergoglio (“Pope Francis”) as the legitimate Successor of St. Peter. He even offers a free copy of his book, The Ratzinger Code, to all scholars willing to take the challenge.

Not infrequently, he receives in return only insults and scurrilous accusations. One such response was received from the rather well acclaimed founder of the Instituto Lepanto, here at Rome, Dr. Roberto De Mattei, who throughout the last 40 years, through his magazine, Lepanto, has in his capacity as a Professor of History, attempted to stay the tide of modernism and defend western Christian Civiliazation.

I write to thank you for your article “About Andrea Cionci” published yesterday at Corrispondenza Romana, which I invite all readers to read.  Even if we had agreed about it in advance, I could not have wished for a better and more eloquent recommendation: it is a small masterpiece of the sense of professorial superiority and ill-concealed anger that – without even entering into the merits of the argument – led you to lapse into making ad personam attacks against me and arguments so superficial and contemptuous as to make Professor Giovanni Zenone blush.

Your article is a “sublime recapitulation” of all those who have preceded you [in attacking me]: the accusation that I am “incompetent” stolen from Don Tullio Rotondo; calling me a “fool who is dominated by the desire to know” and “has lost his compass,” taken from the director of the same site, Riccardo Cascioli; the ridicule of my “brainy theses” made by the excellent Don Ariel Levi of Gualdo, the careful popularizer of the false letters of Monsignor Gänswein produced with a Microsoft Word license registered in his name.

If you will allow me to make a suggestion: there was only one note missing: you should have pointed out the assonance of my surname [Cionci] with the verb “cianciare” (“to gossip”), and then the article would have been perfect.

But, on the other hand, you have given us proof of your amazing capacity for contradiction when you state:

“The abdication of Benedict XVI and the manner in which it took place is considered by many scholars and even by eminent members of the Sacred College as a grave error.”

Excellent point. So then, what makes you suppose that in Canon Law such an erroneous act (and, moreover, one of such magnitude) both in content and modality, can be considered valid?

(Just yesterday we wrote about a “Ratzinger effect“: the  strange phenomenon whereby the enemies of Benedict XVI’s papal legitimacy are the first to affirm it involuntarily).

Think of my “vana curiositas” concerning the details which have fascinated me: in order to be valid, the abdication needed to be made simultaneously, be a resignation of the petrine munus, and be formally and juridically correct, while instead it was deferred [seventeen days], was only a resignation of the ministerium, was not confirmed after 20.00 on 28 February 2013 and finally was filled with grammatical errors. Yet, Pope Benedict claims to have written it in Latin so that he would “not commit errors.” Really? Is it not perhaps possible that it was never an abdication, from the beginning?

I really enjoyed your trick of presenting me to your many readers as a crazy person who complains because no one interprets the mysterious codes that only he sees. I am quite happy to accept the role of the buffoon. Perhaps then, since you are a historian, you will be able to explain to us why Pope Ratzinger has written that, like him, “no pope has resigned in the last thousand years and even in the first millennium it has been an exception.”

Or perhaps you can enlighten us as to why he continues to impart his apostolic blessing, or why he makes the Secretariat of State reply in a letter that the pope emeritus is the “Supreme Pontiff.”

And regarding the fact that he said he still wears the white robe because it was the most “practical” thing, perhaps you will agree with Don Rotondo, who said that Benedict XVI preferred to save 1,000 euros on a new black cassock, regardless of the confusion into which he would throw a few million faithful souls. Or perhaps, dealing only with “what is visible,” you actually believe that, for the past nine years, no ecclesiastical tailor has had time to make a black cassock for the “emeritus.”

By the way: wasn’t it precisely you who maintained that the status of “emeritus,” for the pope, does not have any meaning?

In my penultimate article I addressed criticism towards you (serious criticisms, but not offensive on a personal level) concerning the objective nature, as well as the historical implications, of the fact that you and other conservative Catholics refuse to examine  the juridical possibility that Pope Benedict did not leave the see vacant, but impeded, in accord with canon 335. I cite the code of canon law from this website (https://www.altalex.com/documents/news/2013/02/12/codice-di-diritto-canonico-le-dimissioni-del-pontefice) because, magically, the Vatican website dedicated to the Code of Canon Law has not been usable for the last few days:

“Canon 335. When the Roman See is vacant or entirely impeded, nothing is to be altered in the governance of the universal Church.”

And here is my bizarre thesis: Could it not be possible that if the pope does not exercise his munus (and is therefore deprived of his ministerium) he is impeded rather than having abdicated? Canon 412 states: “An episcopal see is understood to be impeded if by reason of captivity, banishment, exile, or incapacity a diocesan bishop is completely prevented from exercising his pastoral office (MUNUS) in the diocese, so that he is not able to communicate with those in his diocese even by letter.” (… Episcopus dioecesanus plane a MUNERE pastorali in dioecesi procurando praepediatur…”.

And could it not be precisely because of this difficulty of communication imposed by the impediment that Benedict XVI expresses himself with subtle language, but not too subtle, so that even a journalist (“the scum of the world of letters,” as Prof. Zenone explains) has managed to understand it?

Perhaps one could ask for enlightenment from the canonists of Bologna who, just one month after my “provocation,” formed a study group “on the pope emeritus and the impeded pope.”

You will be amused by the fact that, by strange coincidence, Benedict XVI recently declared: “The answer is in the book  of Jeremiah,” – where we read: “I am impeded” (Jer 36:5).

Finally, allow me a general consideration: as a historian, you will certainly know that, for centuries and millennia, the figures keep returning in a wearily repetitive way of “those philosophers who, filled with the obstinacy of the asp,” do not even want to examine the theses of their opponents, delegitimizing them regardless of the merits of what they say.

Yet you have published the interesting volume “I sentieri del male” [“The paths of evil. Plots, conspiracies, collusions”] and you therefore of all people would be highly qualified to examine the most important plot of all.

I tell you with “personal friendship” (quoting a delicious example of a phrase used as a “Ratzinger code”): are you sure you want to miss this final opportunity to avoid going down in history with the label of being the prestigious university professor who does not stoop to consider the interpretations of others?

Think about it. It could be a big mistake, since there will certainly be a day when Pope Benedict will no longer be impeded and will provide a word no longer intended only “to those with ears to hear,” but to the whole world.

In any case, renewing my gratitude to you, I send you my cordial greetings and make myself available to offer you a copy of my book, should you be interested.