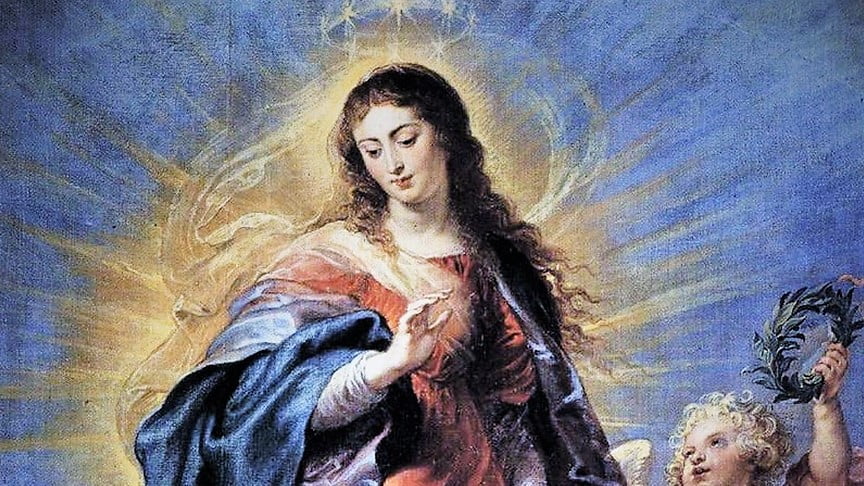 Pope Paul VI solemnly concluded the Second Vatican Council in the square in front of St Peter’s Basilica 40 years ago, on 8 December 1965. It had been inaugurated, in accordance with John XXIII’s wishes, on 11 October 1962, which was then the Feast of Mary’s Motherhood, and ended on the day of the Immaculate Conception.

The Council took place in a Marian setting. It was actually far more than a setting: it was the orientation of its entire process.

It refers us, as it referred the Council Fathers at that time, to the image of the Virgin who listens and lives in the Word of God, who cherishes in her heart the words that God addresses to her and, piecing them together like a mosaic, learns to understand them (cf. Lk 2: 19, 51).

It refers us to the great Believer who, full of faith, put herself in God’s hands, abandoning herself to his will; it refers us to the humble Mother who, when the Son’s mission so required, became part of it, and at the same time, to the courageous woman who stood beneath the Cross while the disciples fled.

Indeed, with this title the Pope summed up the Marian teaching of the Council and provided the key to understanding it. Not only does Mary have a unique relationship with Christ, the Son of God who, as man, chose to become her Son. Since she was totally united to Christ, she also totally belongs to us. Yes, we can say that Mary is close to us as no other human being is, because Christ becomes man for all men and women and his entire being is “being here for us”.

Christ, the Fathers said, as the Head, is inseparable from his Body which is the Church, forming with her, so to speak, a single living subject. The Mother of the Head is also the Mother of all the Church; she is, so to speak, totally emptied of herself; she has given herself entirely to Christ and with him is given as a gift to us all. Indeed, the more the human person gives himself, the more he finds himself.

The Council intended to tell us this:  Mary is so interwoven in the great mystery of the Church that she and the Church are inseparable, just as she and Christ are inseparable. Mary mirrors the Church, anticipates the Church in her person, and in all the turbulence that affects the suffering, struggling Church she always remains the Star of salvation. In her lies the true centre in which we trust, even if its peripheries very often weigh on our soul.

In the context of the promulgation of the Constitution on the Church, Paul VI shed light on all this through a new title deeply rooted in Tradition, precisely with the intention of illuminating the inner structure of the Church’s teaching, which was developed at the Council. The Second Vatican Council had to pronounce on the institutional components of the Church: on the Bishops and on the Pontiff, on the priests, lay people and Religious, in their communion and in their relations; it had to describe the Church journeying on, “clasping sinners to her bosom, at once holy and always in need of purification…” (Lumen Gentium, n. 8).

This “Petrine” aspect of the Church, however, is included in that “Marian” aspect. In Mary, the Immaculate, we find the essence of the Church without distortion. We ourselves must learn from her to become “ecclesial souls”, as the Fathers said, so that we too may be able, in accordance with St Paul’s words, to present ourselves “blameless” in the sight of the Lord, as he wanted us from the very beginning (cf. Col 1: 21; Eph 1: 4).

But now we must ask ourselves: What does “Mary, the Immaculate” mean? Does this title have something to tell us? Today, the liturgy illuminates the content of these words for us in two great images.

First of all comes the marvellous narrative of the annunciation of the Messiah’s coming to Mary, the Virgin of Nazareth. The Angel’s greeting is interwoven with threads from the Old Testament, especially from the Prophet Zephaniah. He shows that Mary, the humble provincial woman who comes from a priestly race and bears within her the great priestly patrimony of Israel, is “the holy remnant” of Israel to which the prophets referred in all the periods of trial and darkness.

In her is present the true Zion, the pure, living dwelling-place of God. In her the Lord dwells, in her he finds the place of his repose. She is the living house of God, who does not dwell in buildings of stone but in the heart of living man. She is the shoot which sprouts from the stump of David in the dark winter night of history. In her, the words of the Psalm are fulfilled: “The earth has yielded its fruits” (Ps 67: 7).

She is the offshoot from which grew the tree of redemption and of the redeemed. God has not failed, as it might have seemed formerly at the beginning of history with Adam and Eve or during the period of the Babylonian Exile, and as it seemed anew in Mary’s time when Israel had become a people with no importance in an occupied region and with very few recognizable signs of its holiness.

God did not fail. In the humility of the house in Nazareth lived holy Israel, the pure remnant. God saved and saves his people. From the felled tree trunk Israel’s history shone out anew, becoming a living force that guides and pervades the world.

Mary is holy Israel: she says “yes” to the Lord, she puts herself totally at his disposal and thus becomes the living temple of God.

The second image is much more difficult and obscure. This metaphor from the Book of Genesis speaks to us from a great historical distance and can only be explained with difficulty; only in the course of history has it been possible to develop a deeper understanding of what it refers to.

It was foretold that the struggle between humanity and the serpent, that is, between man and the forces of evil and death, would continue throughout history.

It was also foretold, however, that the “offspring” of a woman would one day triumph and would crush the head of the serpent to death; it was foretold that the offspring of the woman – and in this offspring the woman and the mother herself – would be victorious and that thus, through man, God would triumph.

If we set ourselves with the believing and praying Church to listen to this text, then we can begin to understand what original sin, inherited sin, is and also what the protection against this inherited sin is, what redemption is.

What picture does this passage show us? The human being does not trust God. Tempted by the serpent, he harbours the suspicion that in the end, God takes something away from his life, that God is a rival who curtails our freedom and that we will be fully human only when we have cast him aside; in brief, that only in this way can we fully achieve our freedom.

The human being lives in the suspicion that God’s love creates a dependence and that he must rid himself of this dependency if he is to be fully himself. Man does not want to receive his existence and the fullness of his life from God.

He himself wants to obtain from the tree of knowledge the power to shape the world, to make himself a god, raising himself to God’s level, and to overcome death and darkness with his own efforts. He does not want to rely on love that to him seems untrustworthy; he relies solely on his own knowledge since it confers power upon him. Rather than on love, he sets his sights on power, with which he desires to take his own life autonomously in hand. And in doing so, he trusts in deceit rather than in truth and thereby sinks with his life into emptiness, into death.

3 thoughts on “Pope Benedict XVI — Wednesday Audience on the vigil of the Immaculate Conception, 2005”