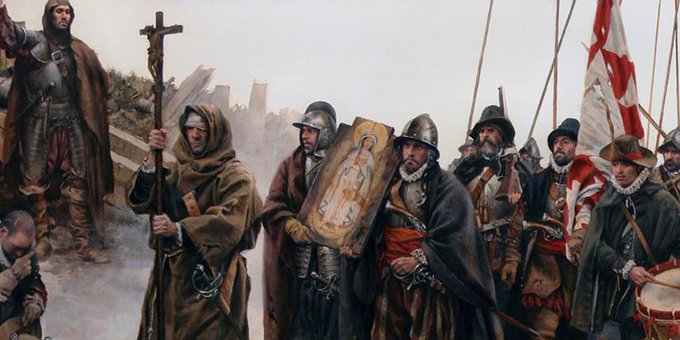 On December 8, 1585, the Miracle of Empel (Flanders) occurred, (read more here) after finding a table of the Immaculate Conception on the previous day and set up an altar for Her Image, the surface of the Meuse River froze, during the night, allowing the Catholic Spanish army to break out of the Protestant Dutch siege.

As is related in the link above:

And Then a Miracle …

During the early hours of December 8, an icy wind began to blow, which caused the waters of the Meuse (Maas) to freeze – something that had not been witnessed for many years. So, Bobadilla ordered Captain Cristobal Lechuga to prepare two hundred men to attack the enemy.  Thus, the Spanish infantry marched onto the ice and completed a surprise attack. The Spanish infantry took many prisoners and captured and burned all the ships of the enemy fleet.

On December 9, the Spaniards charged and conquered the Dutch fort located along the river. The Spanish victory was so complete that many sources claim that Admiral Holak went on to say:

“In my opinion, it seems that God is Spanish to work so great a miracle [for them]. Five thousand Spaniards who were also five thousand soldiers […] and five thousand devils.”

In 1585 a miracle attributed to the Immaculate Conception allowed the Spanish troops to win the Battle of Empel in Holland.  https://t.co/flNuXtiwTn