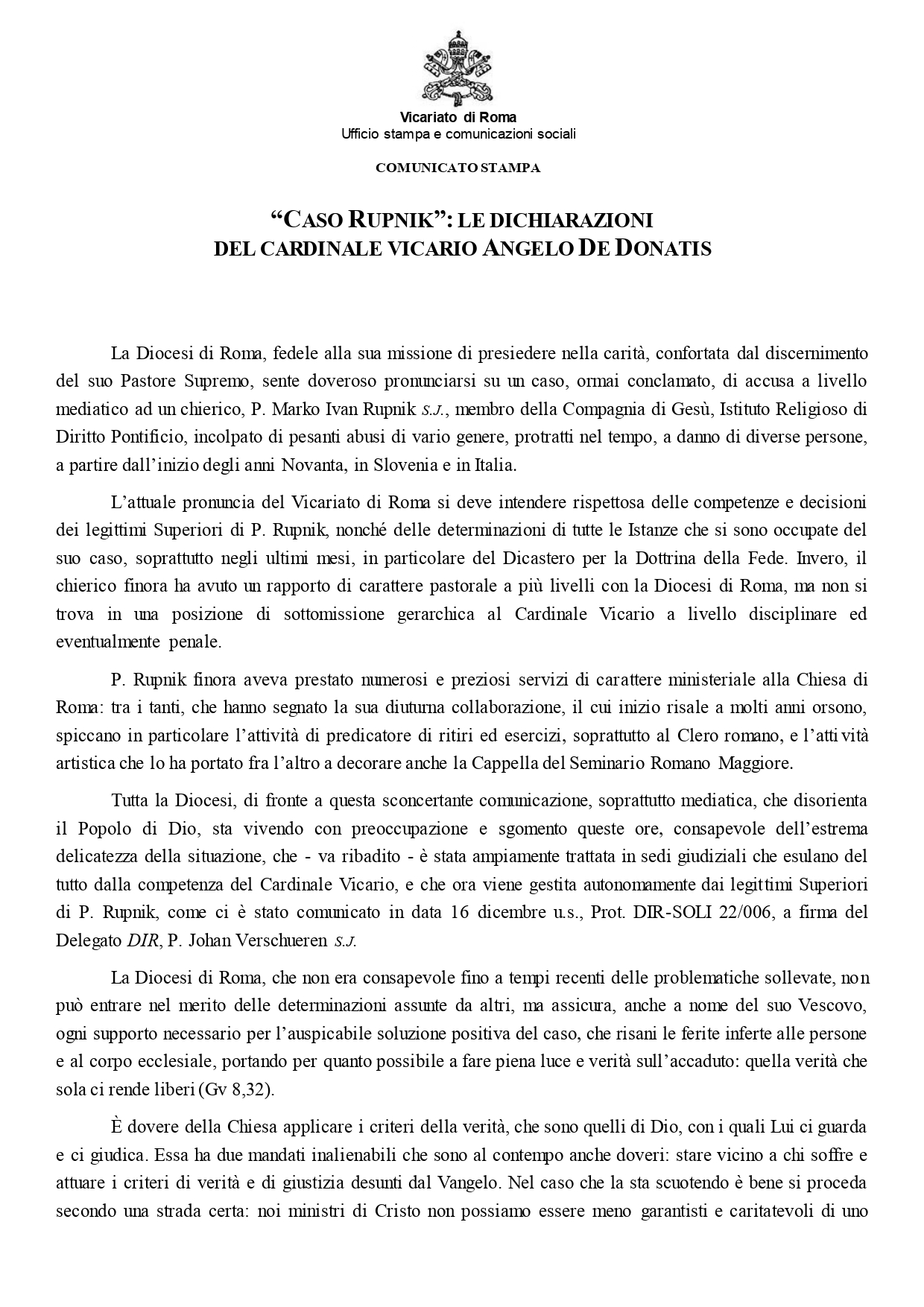 (citation in whole or part when accompanied by full attribution, hereby granted to all)

The Diocese of Rome, faithful to Her mission of presiding in charity, comforted by the discernment of Her Supreme Shepherd, feels that is obliged to pronounce on a case, already widely known, regarding the journalistic accusations against a cleric, Father Mark Ivan Rupnik, S. J., a member of the Company of Jesus, a Religious Institute of Pontifical Right, who has been faulted for grave abuses of various kinds, over a period of time, to the damage of diverse persons, beginning at the start of the 90’s, in Slovenia and in Italy.

The present pronouncement of the Vicariate of Rome is intended to be respectful of the competencies and decisions of the legitimate superiors of Father Rupnick, as well as all the decisions at every moment which regard his case, above all in recent months, in particular by the Dicastery for the Doctrine of the Faith.  In fact, the cleric has had relations of a pastoral character, with the Diocese, at several levels, but is not in a position of hierarchical subordination to the Cardinal Vicar as regards disciplinary and eventual penal matters.

Fr. Rupnik has until now proffered numerous and precious services of a ministerial character to the Church of Rome: among which many, which mark his daily collaboration, which began nearly many years ago, there stand out his activity as a preacher of retreats and exercises, above all to the Clergy of Rome, and his works of artistic activity which brought him, among other things, to decorate even the Chapel of the Major Seminary of Rome.

The entire Diocese, in the face of these disconcerting communications, above all those in the media, which are disorienting the People of God, is living the present hours with worry and dismay, conscious of the extreme delicacy of the situation, which – as merits repeating – has been amply addressed in the tribunals which are entire outside of the competence of the Cardinal Vicar, and which are run autonomously by the legitimate Superiors of Father Rupnick, as was communicated on Dec. 16 in Protocol. DIR-SOLI 22 006, and signed by the Delegate of the DIR, Fr. Johan Verschuren S. J..

The Diocese of Rome, which was not aware until now of the problems which arose, cannot enter into the merit of the determinations taken by others, but assures, even in the name of Her Bishop, ever necessary support for a favorable positive outcome of the case, which heal against the wounds of the persons involved and of the body of the Church, so as to bring to bear as much as possible full light and truth about what has happened: that truth which alone makes us free (John 8:32).

It is the duty of the Church to apply the criteria of truth, which are those of God, with which He watches over us and shall judge us.  She has two inalienable mandates which  are at the same time also duties: to be near to those who suffer and to put into practice the criteria of truth and justice derived from the Gospel.  In the case which currently afflicts Her it is good that one proceed according to the certain road: we ministers of Christ cannot fail to be charitable and the guarantors of the Laity, by transforming on the fly an accusation into a crime.  The judges which we see spreading to many with vehemence, do not seem to manifest the Gospel criterion of truth, nor the criterion upon which every state of rights us based; that one must not depart from the letter of the law (a verbis legis non est recedendum).

The Church which is at Rome in this moment judges that it is primary and fundamental that there be welcomed with profound respect the suffering and grief of all the persons involved in this matter, above all in this liturgical season of the year which calls us all to recognize in Christ the Savior the One who alone is capable to heal the wounds of man’s heart.

In particular, the Diocese of Rome promises every cooperation necessary to the Company of Jesus and to the Superiors assigned to dealing with the Decree of Protocol DIR-SOLI 22/005 of Dec. 16, singed by the Delegte of the DIR, Fr. John Verschueren S. J., according to the terms of canon law.  This will require in truth, among other things, a series of disciplinary measures in respect of the diocesan canonical offices – those which are alone subject to the Cardinal Vicar – in regard to those positions presently held by Fr. Rupnik, in particular those as Rector of the Church of St. Philip Neri on the Esquiline, and Member of the Diocesan Commission for Sacred Art and Cultural Heritage.

The Diocese of Rome is otherwise conscious of having the duty to reflect and eventually take disciplinary measures in regard to the multi-year activity conducted by Father Rupnik and by his Collaborators even within the territory of our Diocese: this regards the famous “Centro Aletti”, begun in the first years of the ‘90s, then developed and enlarged under the activity of the Company of Jesus and finally transformed, on June 5, 2019 (cf. Protocol Decree n. 349/19) into a Public Association of the Faithful in the Diocese of Rome, of which the present Director is Dr. Maria Campatelli.

We entrust everything to the mercy of the Lord and to the prudent discernment of the one who is called to take decisions over such co-involved persons.

The above appears to be the response of the Diocese of Rome to the recent lurid interview by Italian Media of one of Rupnik’s victims. Her story of victimization over nearly a decade, is described in this article, below. This material should NOT be shown to children.