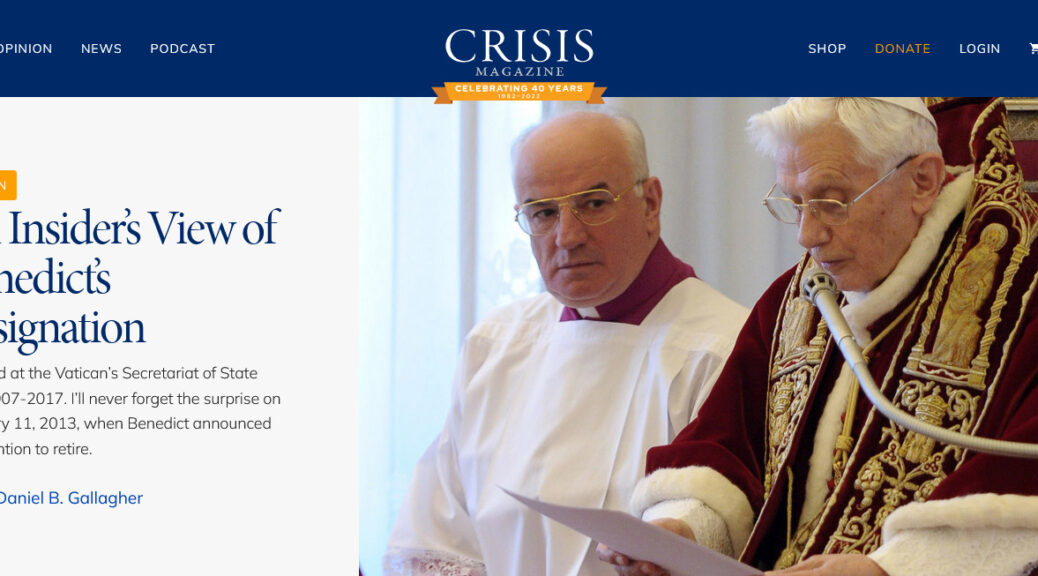 Crisis Magazine yesterday published the personal testimony of a professor of Latin at Cornell University who claims to have worked in the Vatican Secretariate of State offices from 2007-2017. The testimony is noteworthy for things it affirms and denies.

First, that he denies that the workers of the Secretariate of State saw the Pope’s Latin text of his Declaratio, before it was read aloud in the Clementine Hall at about 10:30 A.M. on February 11, 2013.

Yet, the Holy Father Himself, in his biography, Ein Lieben, affirmed that he showed his text to the Secretary of State for approval and nihil obstat, as it were.

So if we hold that both statements are true, then it must be that the review of the text was done by a secret small group. And this is coherent with reports that it was done under the Pontifical Secret, that is, as a for your eyes only, top clearance officials.

However, in the summer of 2016, I met with a top Latinist of the Secretariate of State, and he too affirmed the same thing, that he knew of no Latinist anywhere in the Vatican who had reviewed the text.

From all of this I conclude that neither the Latinist I spoke with nor the one who penned the above article were privy to the decisions being made in those days.

And if that is true, then we can draw no forensic conclusion from what the article above says, because its author was out of the loop, as it were, and is not a witness to the events.

Thus his opening statement is gutted of all authority:

“Even after his death, the resignation of Pope Benedict XVI raises a lot of questions. Was his resignation legitimate? Was he forced to resign? Was he working covertly to undermine his successor’s pontificate? As someone who worked for both men, I can assure you it’s all nonsense. “

I agree, that if you thought it all nonsense, that you surely would be kept on by the revolutionaries. But since there are extant here at Rome and round the world, letters signed by officials of the Secretariate of State after 2013, in which the Holy Father, Pope Benedict XVI is saluted as “Supreme Pontiff”, and “Holy Father”, the author of the above article should be understood to be joking, because he surely must know colleagues who disagree with him, and would affirm, that there is some sense to it after all.

Indeed, in a court of law with rules for evidence, the above article would not even be admitted, because to give testimony you have to have been in the place of the crime at the time of the crime and have seen something.  You could have been in the room of the murder, asleep, and say, “I saw and heard nothing”, but your testimony is obviously worthless as regards solving the murder.

From a point of view of propaganda, however, it is clear, that if after 10  years you are scraping the barrel of testimonies to find something to disprove what has been documented and demonstrated in canon law, official biographies, and Vatican documents, then it is clear that you have arrived at the ultimate moments of desperation before total defeat.

Crisis Magazine was purchased a few years ago, by Eric Sammons, a convert from Methodism, who somehow found the money to purchase 3 Catholic Magazines after his conversion. Sammons is a name of Jews, and he has been publicly asked to explain where he got the money and his ancestry, but has not yet answered.

Crisis Magazine was founded by E. Michael Jones to oppose the crisis of modernity. It is said to see that it is now defending the crisis with untenable testimonies.

As a fellow Latinist, however, I would very much like to see Dr. Daniel B. Gallagher’s analysis of the Latin text of the Declaratio, to understand what kind of Latinist he be and what things he might see in the text, that I have not yet recognized.

2 thoughts on “VATICAN: ex-Latinist at Secretariate of State denies they corrected Benedict’s Declaratio of Feb. 2013”