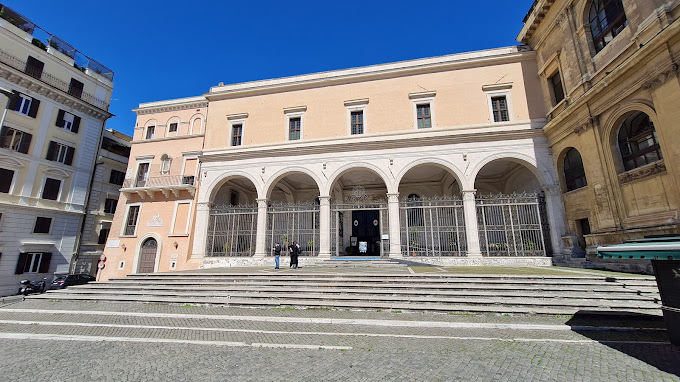 This morning, at 11:30 A. M., the Catholics of Rome, gathered in front of the Basilica of St. Peter in Chains, near the Colosseum, in downtown Rome, publicly admonished the College of Cardinals for not calling a Conclave. In their monitum, they warned the Cardinals of their grave error in deviating from the Papal Law Universi Dominic Gregis.  The following text was read and handed out to the press corps present. I present that here in this PDF in Italian. An English translation, follows. — I will report the Italian News coverage of this event, later today. — POLISH TRANSLATION below.


Solemn Admonishment
of the College of Cardinals

In front of the Basilica of St. Peter in Chains, Rome, Italy

The Church of Rome is the Church which received the Holy Spirit on the Day of Pentecost, the Church presided over by Saint Peter throughout his entire life, the Church which he brought and planted in this ancient terrestrial imperial capital, so that from Her the light and grace of Christ’s Heavenly Kingdom might flow out to all nations for the salvation of the many.

The Church of Rome is the Immaculate Bride of Christ who has washed Her garments through twenty centuries of persecution, trials, tribulations, betrayals, always supported by the Hand of the Divine Providence Who has intervened, intervenes, and will intervene with marvelous signs to assist Her in Her trials, and Who has raised up servants of God who have led her by the hand ever forward toward the end of times, when Christ Her Spouse and Lord shall return to take Her into the Heavenly Wedding Feast and celebrate there the eternal nuptials of the Beatific Vision.

The Church of Rome has known many changes and turns of events: her 170,000 martyrs, virgins, pontiffs, priests, religious and saints chant forever before the Throne of the Divine Majesty enjoying a particular and singular privilege for having served the King of Kings at the footstool of His Throne in life and in glory.

The Church of Rome is the Church of which the Fathers of the First Vatican Council declared infallibly, that She will have perpetual successors in the Apostolic See, as Bishops to shepherd Christ’s Flock which lingers here in this vale of tears.

These Successors of Saint Peter are the institutionalized guarantee of the Promise of Christ Our Lord, that the Gates of Hell shall never prevail over His Church. These are the sure guarantors of the Faith of Christ which the Divine Lips passed down to the Apostles and through them through the Sacred Hierarchy for the salvation of all generations of Christians.

As members of this One, Holy, Catholic, Apostolic and Roman Church, we Christian Faithful, to make it known to all our brothers and sisters in Christ, and throughout the world, that we will not stand by an allow the gates of Hell to prevail over this Immaculate Bride which we recognize as our Holy Mother Church, do solemnly now declare to one and all, that

Given, that the Living God Sabaoth, Yahweh Adonai, has declared: Thou art Peter and upon this Rock the Gates of Hell shall not prevail,

And given, that the Same Lord Our God and Redeemer, has magisterially taught of this Peter and his successors in Apostolic Succession: Whatsoever you bind upon earth, shall be bound in heaven. And again, “My Words shall never pass away”.

And given that this same Apostle Saint Peter, the Fisherman, came to Rome, planted the Church of Christ and watered it with his teaching and the blood of his martyrdom, leaving to Her the perpetual and inalienable right to validly elect his successor.

We declare that it is of the divine and catholic Faith that the Church of Rome has a perpetual right to elect her own Bishop, Successor of Saint Peter, Vicar of Christ, and that this right is of Apostolic ordinance and part of the Sacred Tradition of the Church, and can not be abolished by any custom or law, but exists forever as a font of right and law.

Now, having seen with our own eyes, that Pope Benedict XVI never did renounce in life the Petrine Munus which he was elected to receive in April of 2005, in accord with the Papal Law, Universi Dominici Gregis, n. 53, as is juridically proven in the Latin text of the Declaratio he gave on February 11, 2013, when compared to the Latin text of canon 332 §2 of the 1983 Code of Canon Law, promulgated by John Paul II, Successor of St. Peter, and as demonstrated also to be his intention, by many authors and studies, We recognize as an objective fact of history, that His Holiness Pope Benedict XVI was the unique, sole, single and only legitimate successor of Saint Peter from the day of his canonical election to the date of his death on Dec. 31, 2022 A. D..

Wherefore, since that moment the Church of Rome has been in sede vacante and the College of Cardinals has been gravely obliged to fulfill the terms of the Papal Law, Universi Dominici Gregis.

However, to our dismay and shock and great displeasure, this College of Cardinals has already begun to deviate from the prescribed Papal Law for the burial of the Roman Pontiff, even though this Law is written in Heaven and is regarded by the Lord Jesus Christ, the King of Kings as binding it all its details whereby the Vicar of Christ, John Paul II, specified this same college as the exclusive electors of the Successors of Saint Peter, under specific conditions, the non observance of which would render any election undertaken null and void, conferring no right upon the one elected, as per n. 76 of the same law.

For this reason, Jorge Mario Bergoglio was never validly elected and obtained no right to be the Bishop of our Church. For this reason, also, the College of Cardinals, if they fail to enter into conclave by the 21st day after the death of the Roman Pontiff, lose all right to validly elect another.

To save Holy Mother Church from the eternal tragedy of no longer having Bishops of Rome, validly elected, there is no other solution based on the principles of right, than that the Faithful of Rome, in absence of action by the College of Cardinals, to have recourse to their Apostolic Right to elect the Faithful.

Thus, we now solemnly declare, that if the College of Cardinals fails to enter into Conclave by the 21st day, that the Faithful of the Church of Rome, that is, of the Diocese of Rome and of the Suburbican Sees, will have the grave duty before God and Saint Peter to come together to elect the legitimate successor of Saint Peter and Pope Benedict XVI.

Hence, we resolve, declare, pronounce, announce and testify, that we shall urge that this be done if such a circumstance does prevail and we call all the Catholic Faithful of the Church of Rome to join us in this holy, religious, upright, just and true Resolution of Faith.

For the honor and glory of the Most Holy Trinity and the exaltation of the Catholic Faith and the preservation of the Apostolic Succession, let us all remain united together in prayer, asking the Holy Spirit to illumine all the Faithful of the Church of Rome, so that we might be guided to do that which is the will of God. Amen. Fiat. Fiat.

23 thoughts on “This morning, the Catholics of Rome admonished the College of Cardinals”