Editor’s Note: It is sad to see two such high clerics attempt to justify opposition to the papal power they have freely chosen to follow instead of Pope Benedict XVI: Burke appears to have abandoned the concept of papal supremacy, and Schneider seems to have abandoned the notion that the pope is protected from harming … END_OF_DOCUMENT_TOKEN_TO_BE_REPLACED

Editor’s Note: After reading this article you will understand why search engines give Fr. Schneider’s hit piece on me at Patheos, a prominent position when ever anyone searches my name. We are on two different sides of an irreconcilable divide. And yes, I agree with the author above, who says, that this man is a … END_OF_DOCUMENT_TOKEN_TO_BE_REPLACED

More than a year ago, Father Schneider publicly libeled the editor of FromRome.Info. He was refuted in detail, but never withdrew his libel, calumnies and detraction. (See article below). Perhaps a good hearted soul, could ask Father to pray about that. 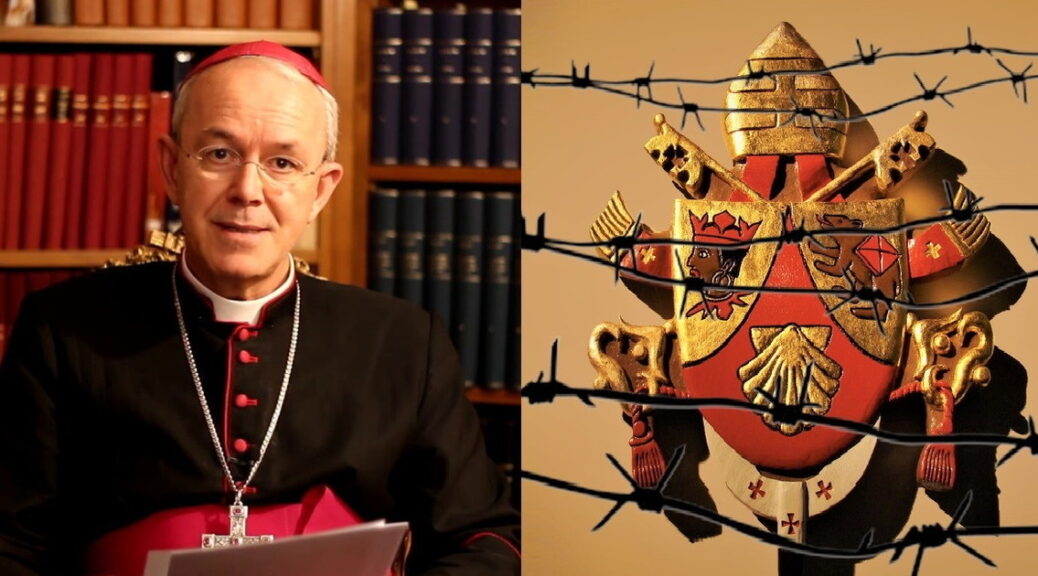 READERS OF FROMROME.INFO PAY ATTENTION — THIS  LETTER CONTAINS IMPORTANT THEOLOGICAL AND FORENSIC OBSERVATIONS WHICH HERETOFORE HAVE NOT BEEN CLARIFIED. by Andrea Cionci Authorized English Translation by FromRome.Info FRENCH TRANSLATION FOR ORIGINAL TEXT CLICK IMAGE ABOVE — For links in text, see Italian original Most Reverend Excellency, I have listened to your reflections (here) on … END_OF_DOCUMENT_TOKEN_TO_BE_REPLACED

Commentary and Rebuttal by Br. Alexis Bugnolo Authorized Portuguese Translation — Authorized French Translation It is personally painful for me to have to, yet again, put pen to paper, as it were, and refute the silly arguments of a prelate whom I once admired as one of the best of the best in the Church. … END_OF_DOCUMENT_TOKEN_TO_BE_REPLACED

Editor’s Note: Thanks to a reader, I have found a deep personal reason for Bishop Athanasius Schneider to reject Pope Benedict and embrace Bergoglio, the idol-worshipper. He was a member of Opus Angelorum for 23 years until his ordination as a Bishop. Opus Angelorum is a sect whose bizarre devotion to angels, good and evil, … END_OF_DOCUMENT_TOKEN_TO_BE_REPLACED

by Antonio Ghislieri Despite not being an ordinary, the Auxiliary of Asana, Kazakstan, Bishop Athanasius Schneider, OSC has enjoyed no small influence within the Universal Church owing to his vast travel, his remarkable facility with many languages and a reputation for defending the Apostolic Tradition in both its content and praxis. This article replies to … END_OF_DOCUMENT_TOKEN_TO_BE_REPLACED

Editor’s Note: This video’s content is as explosively absurd as it’s title. And this, from a man of God who said in previous years, that heresy does not put you outside of the communion of the Church. It contains numerous historical errors and a complete complex of faulty and erroneous opinions and interpretations of jurisprudence … END_OF_DOCUMENT_TOKEN_TO_BE_REPLACED 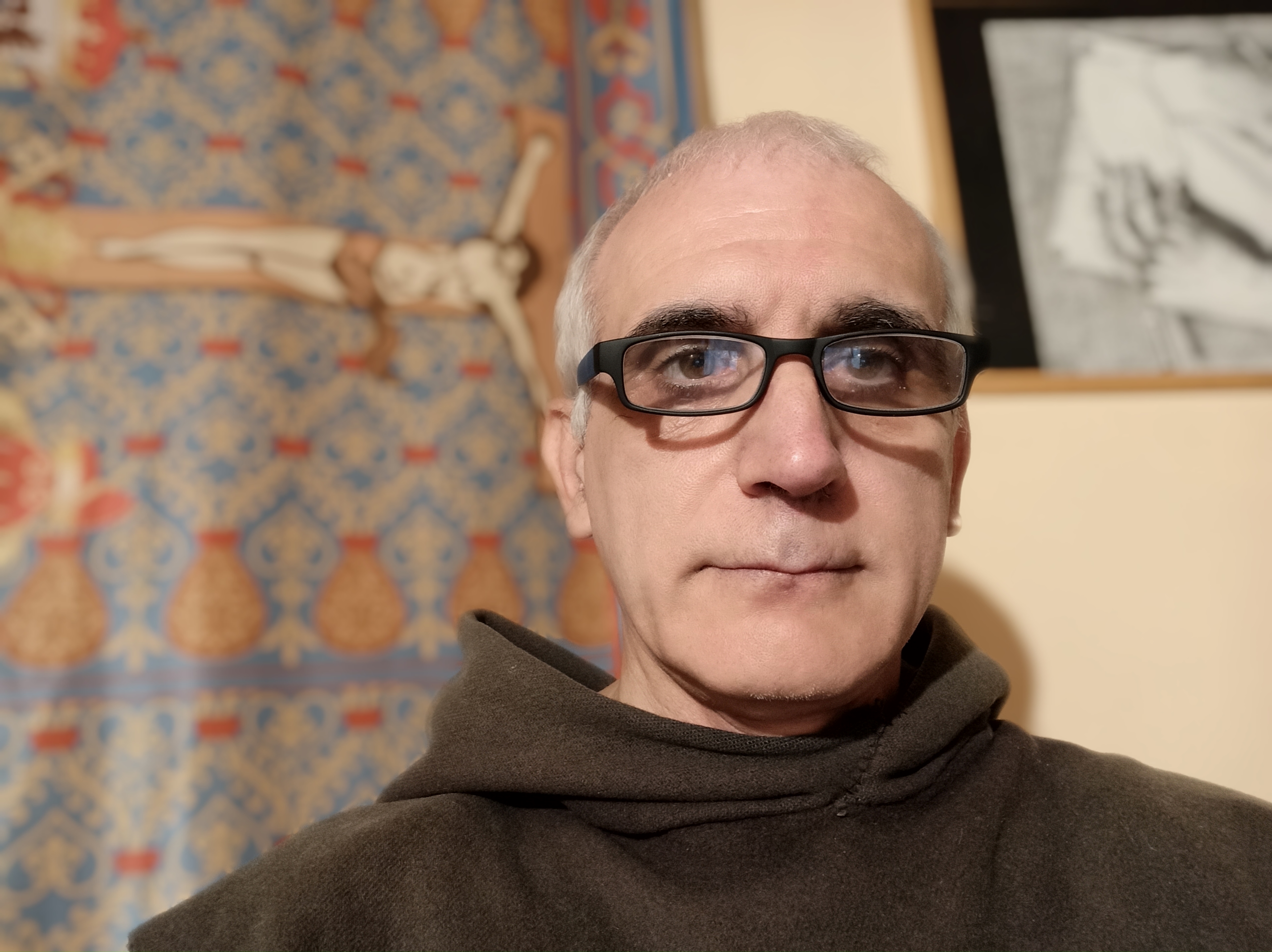 Reply to the above by Br. Alexis Bugnolo PLEASE NOTE THAT FATHER SCHNEIDER HAS REMOVED THE COMMENT SECTION FROM HIS LIBELLUS. (As of July, 2022) There are numerous errors contained in the article above, which you can read by clicking the image. Note, above all, that the title of Father Matthew P. Schneider’s article is … END_OF_DOCUMENT_TOKEN_TO_BE_REPLACED 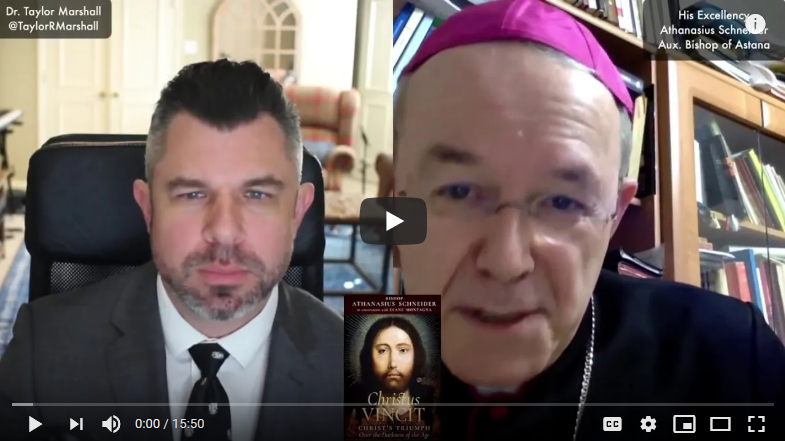 REPRINT FROM MARCH 2020 Note that it has been a year, and neither has answered these 5 questions! by Br. Alexis Bugnolo Over at Catholic Monitor, Fred Martinez has cut through all the deception and lying of Bishop Schneider and Dr. Taylor Marshall in their recent YouTube Video, and has proposed to them 5 yes … END_OF_DOCUMENT_TOKEN_TO_BE_REPLACED 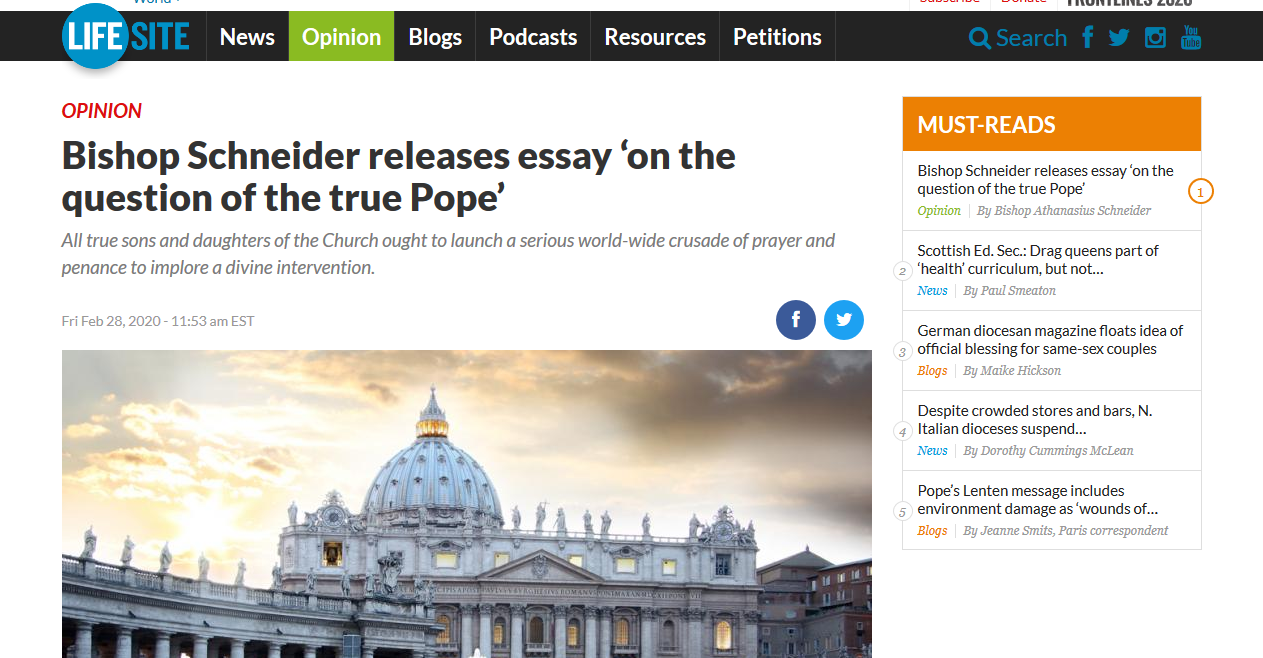 by Br. Alexis Bugnolo French Translation The Angelic Doctor, Saint Thomas Aquinas, in his Summa Theologica hands down the Catholic Tradition on the duties of the Catholic Faithful in matters where the Faith itself is put into public doubt or danger by the actions or statements of prelates, even of one’s own Bishop, when he … END_OF_DOCUMENT_TOKEN_TO_BE_REPLACED 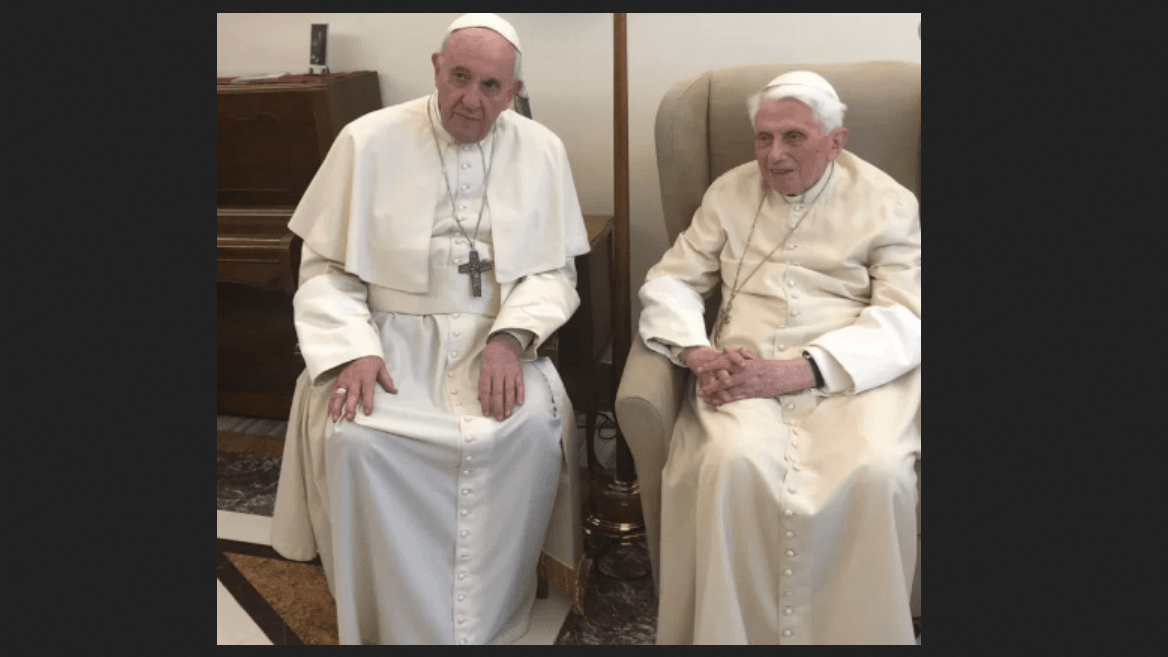 MARCOTOSATTI.COM Authorized English translation by FromRome.Info Due Papi, Due Domande Impellenti, Una Risposta urgente. by Marco Tosatti Dear Friends and enemies of Stilum Curiae: a friend of our community, Sergio Russo, author of the book about which about which we spoke some time ago, Sei tu quello o dobbiamo aspettarne un altro? (Are you the … END_OF_DOCUMENT_TOKEN_TO_BE_REPLACED

A lot of Catholics have asked me to refute Bishop Athanasius’ Schneider in detail. I have written a partial refutation, but his position is so absurd I have refrained, but here is a sound refutation on the more principal points:

However, I will point out that there is in the Church no such thing as the Byzantine Catholic Patriarch. The group which produced this has a checkered history, canonically, but at least doctrinally, in this refutation of Mons. Schneider, they take a Catholic position. Synods must be called in every nation to condemn Bergoglio.

The only errors I see in this video are:

Third, they avoid entirely that Pope Benedict XVI is the true pope. They do this because in certain matters they themselves have usurped ecclesiastical offices and powers, such as, for example, establishing a Byzantine Patriarchate, without any authority from God or Pope Benedict XVI.

Finally,  I would like to point out, for the sake of public record, that back in 2015 I was greatly inspired by the sound and heroic statements of Bishop Schneider against the errors being promoted by Bergoglio. It truly saddens me that he has abandoned the Catholic Faith and Canon Law to insist that Bergoglio is still the pope, despite all his public sins, his pertinacious heresy, his apostasy and his schism mongering. In this he has done a very wicked thing, and I think if he persists in his false position, that he must be reckoned by all Catholics a heretic himself, for denying the constant teaching of the Church that heretics and apostates and schismatics lose office immediately, as canon 1364 states.

MARCOTOSATTI.COM Authorized English translation by FromRome.Info Due Papi, Due Domande Impellenti, Una Risposta urgente. by Marco Tosatti Dear Friends and enemies of Stilum Curiae: a friend of our community, Sergio Russo, author of the book about which about which we spoke some time ago, Sei tu quello o dobbiamo aspettarne un altro? (Are you the … END_OF_DOCUMENT_TOKEN_TO_BE_REPLACED

by Br. Alexis Bugnolo Over at Catholic Monitor, Fred Martinez has cut through all the deception and lying of Bishop Schneider and Dr. Taylor Marshall in their recent YouTube Video, and has proposed to them 5 yes or no Questions, and asked them publicly to respond. His article is entitled, Do Marshall and Schneider think … END_OF_DOCUMENT_TOKEN_TO_BE_REPLACED

by Br. Alexis Bugnolo French Translation The Angelic Doctor, Saint Thomas Aquinas, in his Summa Theologica hands down the Catholic Tradition on the duties of the Catholic Faithful in matters where the Faith itself is put into public doubt or danger by the actions or statements of prelates, even of one’s own Bishop, when he … END_OF_DOCUMENT_TOKEN_TO_BE_REPLACED 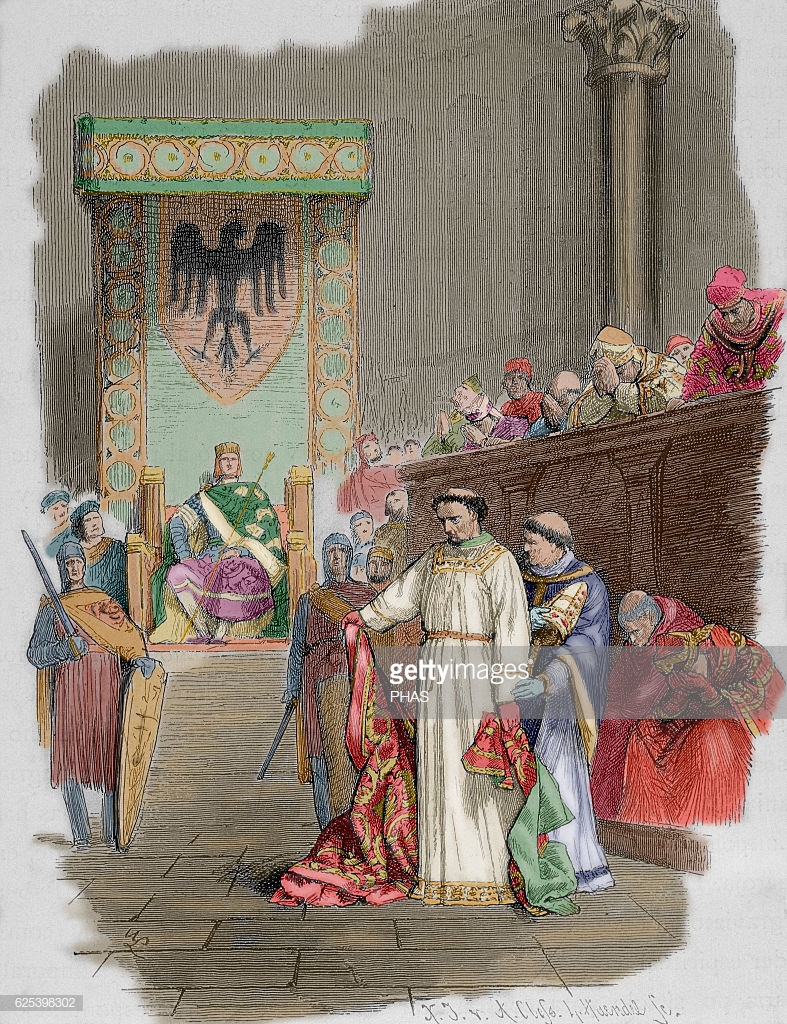 In his recent article at Rorate Caeli, Auxiliary Bishop Athanasius Schneider writes a long article to quell the raging doubts Catholics now have regarding Bergoglio’s claim to the papacy. But in that Article the learned Bishop gets his history lesson wrong, when he writes: Popes were deposed several times by secular powers or by criminal … END_OF_DOCUMENT_TOKEN_TO_BE_REPLACED