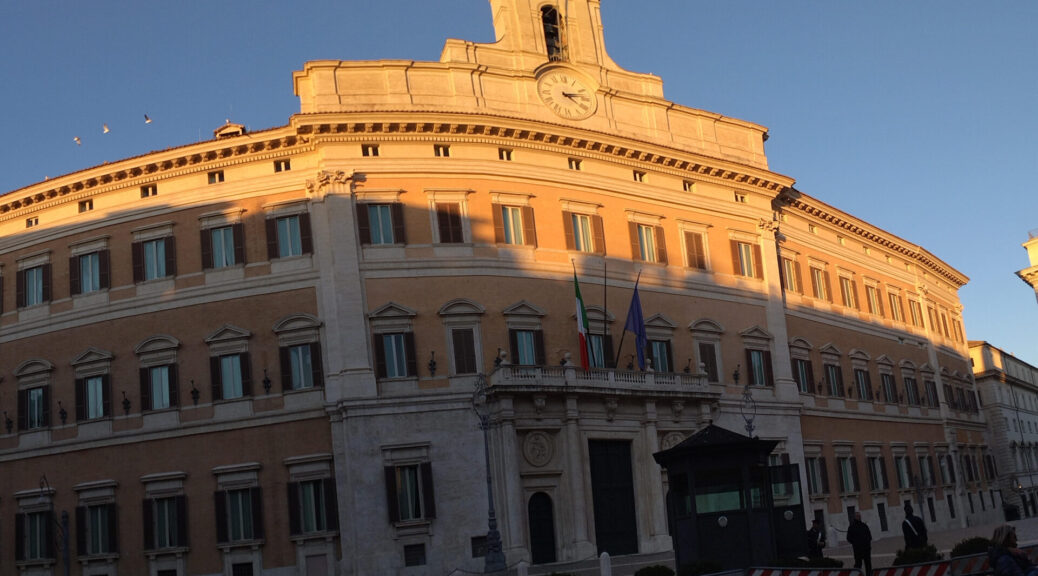 Palazzo Montecitorio is the seat of the Chamber of Deputies, i.e. the lower house of the Italian Republic.  It is also a historic building in Rome, more than centuries old.

The construction of the palace was commissioned in 1653 by His Grace Pope Bl. Innocent X, and has a rather peculiar and troubled history: first commissioned to Gian Lorenzo Bernini, and then passed over the years first to Carlo Fontana and finally to Ernesto Basile.

The beginning of its history occurred in 1653 when Bl. Pope Innocent X, commissioned the architect Bertolini to build a residence for the Lodovisi family.

To adapt to the curved course of the road, the convex facade of the building is broken into five scores, recalling, along with the irregular details decorated with leaves and broken twigs, a building carved on a giant rock.

This project did not make the new structure clash with the pre-existing buildings of Baroque style.

In 1655 the work was abruptly interrupted by the death of the Pope, resuming only after thirty years, upon receipt of the recommission by Pope Innocent XII.

The second architect, Carlo Fontana, revised the design of the building by adding the bell gable and left the front façade intact; lack of funds prevented the unification of the two piazzas overlooked by Montecitorio into a single piazza.

The inauguration of the new seat of the Ecclesiastical Curia finally took place in 1696, allowing 2 very important activities to take place in the building: the Curia Pontificia, that is, the highest body of the judicial administration, called for a long time Curia Innocenziana and the duty.

The funds raised through administrative fees by these institutions were in turn donated to the Hospice “Il San Michele”, this was the name of a Hospice for invalids referred to as the “Apostolic Hospice of the poor invalids”. The memory of this purpose is marked in bas-relief on the right corner of the facade of the courtyard: “Hospitii apostolici pauperum invalidorum”.

The palace was then also used as the seat of the Governor of Rome and the headquarters of the police.

The building assumed a prominent role in the judicial and administrative life of the State of the Church, reflecting its imposing appearance.

When the Kingdom of Piedmonte invaded and stole territories of the Pope, the transfer of the capital to Rome made it an appropriate time to select a new seat for the government. Initially there were other proposals (Palazzo Venezia, …), but were discarded in favor of Montecitorio.

The decision was made in 1870,  andwith great rapidity the work of adaptation was begun by the engineer Paolo Comotto: by means of the pavement of  the internal courtyard, a semicircular hall with steps.

In one year (1871) the “Comotto” chamber-hall was inaugurated, the work was extraordinarily fast, resulting in inadequate acoustics and low thermal insulation: it was chaotic, cold in winter and hot in summer; it caused strong criticism that countered the initial enthusiasm.

In 1900 the government, entrusting again the work to Ernesto Basile, move to the second chamber-hall which he designed.

Ernesto Basile revolutionized the projects of the palace, to build an imposing extension of travertine and red brick, to add four towers in medieval style, had to find space by demolishing the rear to gain space, remained only the original front facade. Basile following the stylistic lines of the ‘era managed to bring out the grandeur and sumptuous royalty of the seat of the chamber, obtaining in the interior decoration great success.

There were no other structural changes nor relevant ones up until the present day (2021).

Montecitorio is the fixed seat of the Italian legislative body, called, the Chamber of Deputies.

Having the offices of the secretary general and the president of the council on the second floor, there are located the main rooms of importance of the building.

A monumental hall leads to the corridor of busts, containing about thirty marble busts of important people in the history of the Republic and Italy, such as Cavour, Garibaldi, ….

The following room, adorned with a bronze statue of the she-wolf, symbol of ancient Rome, is called the “Room of the She-wolf”. Of secondary importance are the Flemish tapestries that adorn it. This room, being the largest in the original wing, has over the years held meetings of utmost importance such as the 1946 referendum.

Two other rooms are the presidential library, seat of the meetings of the bureau, and the “Sala Aldo Moro” so named in 2008, but previously called “yellow room” for the peculiar color of its tapestry, its furnishings come from the former Burbon palace of the Kingdom of Naples, at Caserta.