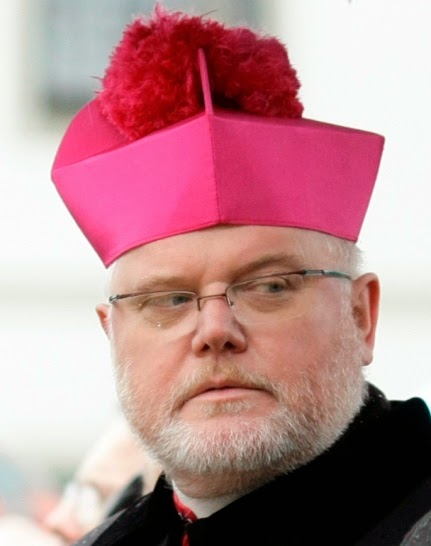 February 6, 2015:  In a stunning admission, Cardinal Reinhard Marx, Archbishop of Munich and Freising, Germany, has publicly affirmed, during an interview with the Jesuit Magazine, America, that Pope Francis rejects the Church of truth.

No less scandalous, are his own words, by which he says, the Church of truth has no usefulness for humanity.  You can read his comments in the original, through this link.  The From Rome Blog will cite, here, only the relevant point:

What challenge accompanies this new time in the church?

It is best to read “The Joy of the Gospel.” Some people say, “We don’t know what the pope really wants.” I say, “Read the text.” It does not give magical answers to complex questions, but rather it conveys the path of the Spirit, the way of evangelization, being close to the people, close to the poor, close to those who have failed, close to the sinners, not a narcissistic church, not a church of fear. There is a new, free impulse to go out. Some worry about what will happen. Francis uses a strong image: “I prefer a church which is bruised, hurting and dirty because it has been out on the streets,” rather than a church that is very clean and has the truth and everything necessary. The latter church does not help the people. The Gospel is not new, but Francis is expressing it in a new way and is inspiring many people all over the world, who are saying, “Yes, that is the church.” It is a great gift for us. It’s very important. We will see what he will do. He has been pope for only two years, which is not much time.

The words of Cardinal Marx (“The latter church does not help the people”) are without a doubt blasphemy against the Son of God and heresy.

They are blasphemy, because the Son of God became incarnate to offer THE ONLY SALVATION POSSIBLE FOR MANKIND, which salvation He conveys to mankind through the Catholic Church, which, as St. Paul infallibly teaches, is the “mainstay and bulwark of the truth”.  There can be no salvation without a church of truth, and that Church is the Catholic Church.

The words of the Cardinal are also heresy, because by saying the Church of truth does not help people, he denies that salvation is first by faith, that is by the dogmatic assent of the mind to revealed truth; and thus he denies that salvation in Christ must encompass the human mind, not only the heart, affections, or body. His words also deny that error harms the human person in his totality to such an extent that it is sufficient of itself to damn a man for all eternity.

The Catholic Church is “the Church of the Truth, Jesus Christ”, and “the Church of truth”, commissioned by Christ to teach the Gospel of salvation to all nations first by words (hence to the mind of believers), second by deeds (works of charity). To deny the usefulness of both aspects is to deny the Church as Christ gave Her to us.

That Cardinal Marx makes these statements is noteworthy, because he is not a nobody, but a close collaborator with the Pope and Cardinal Kasper — one of the alleged leaders of “Team Bergoglio” — and has been such from before the Conclave in 2013 as can bee seen even in photos.

Finally, to say that one prefers a Church which is not clean and does not have the truth to a Church which does, is to choose the former and reject the other, even if one uses language which disguises that rejection in other terms.  Thus, in the negation of the utility of “a church of truth”, Cardinal Marx authentically explains Pope Francis’ preference as a formal rejection of the Church as Christ, the Truth, gave Her to us.

But these remarks by Cardinal Marx should not surprise readers of the From Rome blog, who already know of Pope Francis’ formally heretical statement on the Solemnity of Christ the King, which we have publicly indicated as worthy of condemnation.  In that statement, Pope Francis rejected the objective character of Christ’s office as teacher to all mankind.

For a complete Chronology of reports on the Team Bergoglio scandal, from round the world, click here.