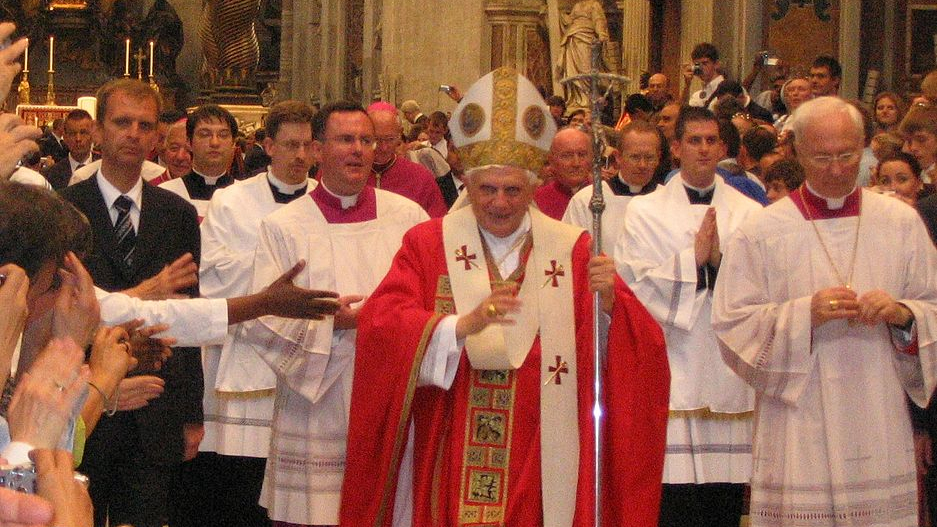 One of the objectives of radical marxists is to get the masses to think evil is good and good is evil, truth is a lie and lies are truth. We see all those who support Bergoglio involved in this sort of fraud and wickedness.

They want us to surrender to them, on account of feeling that victory is impossible. Trad Inc. has pushed this in recent days in nearly those exact words.

What they cannot stand is when Catholics use moral categories and call them out for their sin. They cannot suffer that there be any law or moral norm by which they can be judged. There is only one evil, and that is judging them as lovers of wickedness.

That is why their profession of faith is: Who am I to judge the wicked? And don’t you dare judge me!

But their faith is a ruse, because as soon as you challenge them in their lies they become very judgemental.

On Tuesday, the Vatican asked the police to take me in for a talk. Two hours of grueling accusations and interrogation, in an attempt to find me in violation of some law or regulation. It call came to naught, because from my youth, God and my parents instructed me to be squeaky clean about the observance of all law.

But the attempt had not principally the purpose of harassing me. It was all about shutting up the faithful who wanted to give their testimony in accord with Canon 212 as to what they thought about the last 7 years. In the Piazza San Pietro that day there were at least two dozen faithful. The Secretary of State at the Vatican had to ask the police to take me away before I could interview them and publish their laments and criticisms to the world. That is all what it was about.

So since the agenda of the Argentine is to shut down conversation and persecute truth tellers, I want to respond in this Editorial with an important truth.

Benedict is the Pope

This is a Divine and Empowering truth. Because those who know it AND who profess it

And by these 5 bonds of Unity, they, as it were, plug themselves into the infinite power of God and the infinite Mediation of Jesus Christ.

And against this there is nothing, but

The nasty and effeminate attempts of individuals who do not have the moral maturity or the intellectual capacity to respond in a constructive dialogue which seeks the truth. Because it does not take a doctorate in Canon Law, nor a doctorate in Latin, nor a doctorate in Philosophy, to understand that Benedict XVI is the Pope and has never ceased to be the Pope.

You only have to remember your third grade lesson on vocabulary. If it is a different word, it has a different meaning. That’s why words are different.

If you accept this truth with the same childlike spirit today, as you did when you were in the Third Grade (In the UK they call this year 4), then you are all set. The truth that Benedict is still the pope flows directly from this principle:

All the arguments to the contrary are excuses — what a minute — Let me correct myself — after 7 long years THERE ARE STILL NO CONTRARY ARGUMENTS to the 1.2.3 which I just posted here.

In English, the phrase, It is child’s play, means that it is so easy a child can do it without being taught. Adults who have a difficulty in such a thing are therefore inexcusable.

I am reminded about the final comment which Bishop Arrieta made to me when I met him on Dec. 11, 2019: about my approach to the problem of the failed renunciation being a “strange mixture of Thomism and philosophy”. When I met with the Bishop I did not realize that the very copy of the Code of Canon Law which I use on a daily basis was edited by BISHOP ARRIETA before he was a Bishop. And it is there, in his own words, on Canon 126 that he explains that for a juridical act to be valid it has to posit the act of the same essence as that which is required by the law. So his final comment to me was not honest. He himself admitted 20 years before the very principle I was using to demonstrate the renunciation was invalid.

This is why, when you are told to shut up and be quiet or are insulted on a daily basis or threatened with a denial of the sacraments, of your job, or office, or of your faculties as a priest, or of your pension or housing, in response to your profession that Benedict XVI is still the pope, you need to recognize what it is: the nasty and effeminate tactics of immature crooks, who do not deserve to be called men of God.

We must stop being non-judgemental

And this is why all the Saints and Fathers of the Church are know for their timely and opportune ability to insult the wicked, reprove error, and vituperate what is evil and immoral. Those who say a Saint should never do these things are simply liars.

They are also calling Christ a liar, Who publicly shamed Herod by calling him a female fox — a vixen — to denounce his sodomy. And Who called the Scribes and Pharasees a brood of vipers on two occasions — at least — as is recorded in Matthew 12:34 and 23:33.

Stoicism is a heresy

Finally, we have to avoid the very subtle heresy which has been promoted by evil Jesuits for nearly 4 centuries: Stoicism. In manuals of spiritual theology and direction, they have advocated that it is evil to allow your emotions to be stirred for any reason. This is not the Catholic Faith. This is the error of the pagan philosophers of the school of Stoicism, who held that all emotions were privations or due order in the soul.

God gave us the ability to feel anger, sadness, fear, revulsion, disgust, happiness, joy, gladness etc.. When we allow these emotions to move in harmony with the works of justice and to oppose the works of darkness, we are using our emotions virtuously as God wants. So in matters of controversy, we should not denigrate any servant of God who uses emotions to attack what is evil and whom is promoting evil. Because this is a work of justice. And if it causes us to wince, then we are lacking in fortitude and temperance.

At the same time let us not let the wicked manipulate our attention by their insults. They are not worthy of our attention any more than to defend the truth by refuting their daily lies. Being completely morally and intellectually bankrupt, without any defense of their errors, they have to insult since they have nothing other to say and because insult covers that they have nothing other to say by stirring up passions which cloud the mind.

CREDITS: The Featured Image is the detail of a photo by Alberto Luccaroni and is used here in accord with the Creative Commons Share-Alike 3.0 unported license under which it is offered here.