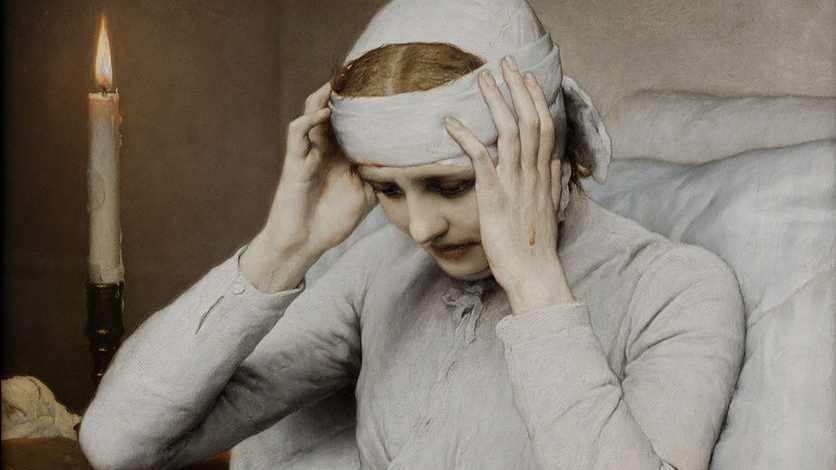 The Rev. Walter Covens has translated this article into French, here.

Tomorrow is the Feast of Bl. Anna-Katerina Emmerick, established by Pope John Paul II in the year of Our Lord 2003. In English, we spell her name, Ann Catherine Emmerich.

Origins, Childhood and the call of Grace

Anna-Katerina was born into a poor family of farmers in Germany, on the Feast of the Nativity of Our Lady, in the year of 1774, at Flamschen, at Coesfeld, a small farming town in Westphalia, in the Diocese of Münster.

As a child she worked in the fields helping her parents and 9 brothers and sisters. As she grew, she went to work for a three year stint at a larger farm to earn money for her family. She then became a seamstress, for the same reasons. She had very little education, but from childhood was devoted to prayer.

Sensing the call to dedicate herself to Christ as one of His faithful virgins, she sought admission to several convents. In those years, Convents required that the prospective vocations bring with them the basic necessities of life and sometimes even money. This was called the convent dowry. Being poor she could not afford this, then, so she took a job with a nearby family, to earn the money necessary. And her charity was so great, that seeing the poverty of that family she helped them rather than saved money, and so delayed some years outside of the Convent.

Eventually, at the age of 28, along with one of the daughters of the same family, she was admitted to the Augustinian Nuns at Agnetenburg in Dülmen, in the same Diocese of Münster. Soon she would show, as many late vocations who persevered through many trials to arrive, exceptional virtue.

Virginity and Devotion, path to Sainthood

After a year of formation, she took her vows. — Back then, perpetual vows were made after only a year. It was a good practice for the sincere since it enabled them to have more certainly for their vocation and protected them from many doubts that turn many vocations away in the current system of 3 to 5 years of formation.

She was known for her strict observance of the Rule of the Convent, a thing which characterizes every Saint of the Church who was a monk or nun or friar. And soon, in reward for her true devotion to her duties as Christ’s virgin bride, she was graced with an exalted mystical life and frequent ecstasies. Her extreme penances and fasts also caused her to have poor health. And both circumstances made her the object of much misunderstanding from her fellow nuns. 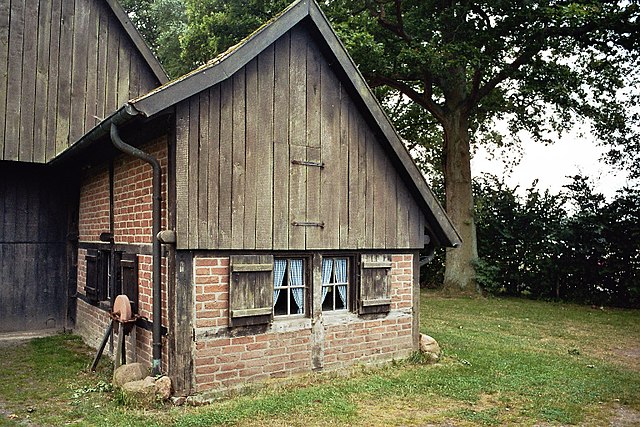 In 1812, the godless Jerome Bonaparte, now King of the French puppet state of Westphalia dissolved the monasteries and seized the property of her convent. She was forced to take refuge with a local widow. To the left, you can see a picture of the house where she would live for nearly the next 12 years.

In 1815, the Lord Jesus gave her His stigmata — mystically produced wounds which replicated some of those which He endured for our salvation.  Her wounds bled and remained on her body until 1818. Their miraculous nature and inexplicable duration was the cause of must astonishment among the doctors and scientists of the region, and remained a source of much controversy. She was written off by one local priest as a self-induced madwoman, because the shape of one of her wounds was that of the Cross in a local Church! At one point the hysteria about her wounds was such, that the Local Authorities detained her for 3 weeks under constant guard, and seeing that the wounds had no natural cause nor closed, let her go.

In the Catholic Church, mysticism refers to the personal encounters of the soul with God and the Saints in extraordinary visible, audible or physical events. From her writings we know that Bl. Emmerich had visions of Jesus as a little girl and spoke with the souls in Purgatory. She was given the tremendous and very rare grace to behold the Most Holy Trinity under the form of an Angelic-iconic form, of 3 Circles, concentric about one another.

Of her visions, she best tried to describe them to Clemens Brentano as she could, so it is not surprising that some of her descriptions are very child-like or take from local lore and legend in an attempt to explain what she saw.

What most Catholics do not know, is that when Saints have visions they are nearly always things imaginary, audible or even physical produced by the Holy Angels who are sent to the Saints to help them understand divine things in a simple childlike manner. Not all saints understand what they see, because that is a separate grace and requires also some natural intelligence. And this is why Holy Mother Church is very cautious in proposing any credence to be given to visions of any kind, because they are very difficult to interpret, being caused by Angelic intelligences far beyond our own, intelligences which have a perfect knowledge of symbology and Scripture, which few of even the most learned theologians have an inkling of.

But her character and personal holiness demonstrated her credibility and soon she had acquired among her friends Father Clemens von Droest, future Archbishop of Cologne, and Johan Saller, Bishop of Ratisbon. Among her noble supporters were the Prince Archbishop, Karl Theodor Anton Maria von Dalberg of Regensburg, the Arch-Chancellor and Elector of the Holy Roman Empire.

Bl. Emmerick on account of her poor education was inspired by God to ask Clemens Brentano to write her visions down, when he visited her, after many years, in 1818. Attacked and vilified by all the enemies of the Blessed, Brentano fulfilled the task so faithfully that he has become ever since the object of scorn by all who wish to de-legitimize Anna-Katerina and the graces she was given by Jesus.

After 10 years of taking dictation and re-editing the material, he published in 1833, Bl. Emmerich’s monumental Life of Christ, entitled, The Dolorous Passion of Our Lord Jesus Christ According to the Meditations of Anne Catherine Emmerich. He then began her second book, but died before it could be completed. It was published ten years after his death in 1852, under the title, The Life of the Blessed Virgin Mary from the Visions of Anna Catherine Emmerich.

Tomorrow will be the 1996th anniversary of the passing of Blessed Anna-Katerina to eternal glory, as she died on Feb. 9, 1824 in Dülmen, where her Convent had stood.

Though the works of Bretano has been severely criticized and its authenticity attacked and discarded by many, the information related by Bl. Emmerich is without doubt prophetic.

The first such confirmation came in 1881, when Father Julien Gouyet, a French priest, believing in her visions, as transcribed by Brentano, rediscovered the House of Our Lady at Ephesus, using information related by Anna-Katerina. This ancient structure, which was venerated by Greek Christians in the earliest centuries, as the residence of Our Lady, when Saint John the Apostle preached at Ephesus, had been lost and forgotten for hundreds of years, with no trace of its exact location being know to scholars of that age.

Her cause for beatification was begun in 1892, but was stopped in 1925 by the Vatican on account of the criticisms of Brentano’s work, which was believed to be more of his own production, than that of the Blessed. Subsequently, however, the Vatican laid aside his writings and began her process again, in 1973, based solely on her personal virtues and example.

The Congregation for the Saints approved the recognition of a miracle attributed to her intercession in July of 2003. She was beatified by Pope John Paul II on the vigil of Saint Francis of Assisi, in 2004, 16 years to the date of the abominable idolatrous rituals in the Vatican, which she foresaw in part. — This seems to be an indication that the Pope had read her writings and put profound faith in what she had said about the coming war between the Church of Light and the Church of Darkness.

Her writings inspired Mel Gibson in his depiction of the Passion of the Christ, the movie.

The great lesson of Bl. Anna-Katerina’s life is that God rewards his faithful servants with knowledge of divine and future things. He does this to console us, lead us to Heaven and help us know of troubles ahead here on Earth so that we can recognize them as such when they arrive. We are blessed if we accept them with the same simple faith that Bl. Emmerich had in receiving them.

It is in this childlike trust in her prophecies regarding Saint Mary Major’s, that Veri Catholici, the international Association of Catholics opposed to the St. Gallen Mafia, has sponsored the 40 Days of Prayer against the Church of Darkness, which FromRome.Info Video features every night at 11:52 PM Rome Time, on its video channel and with a post here at FromRome.Info.