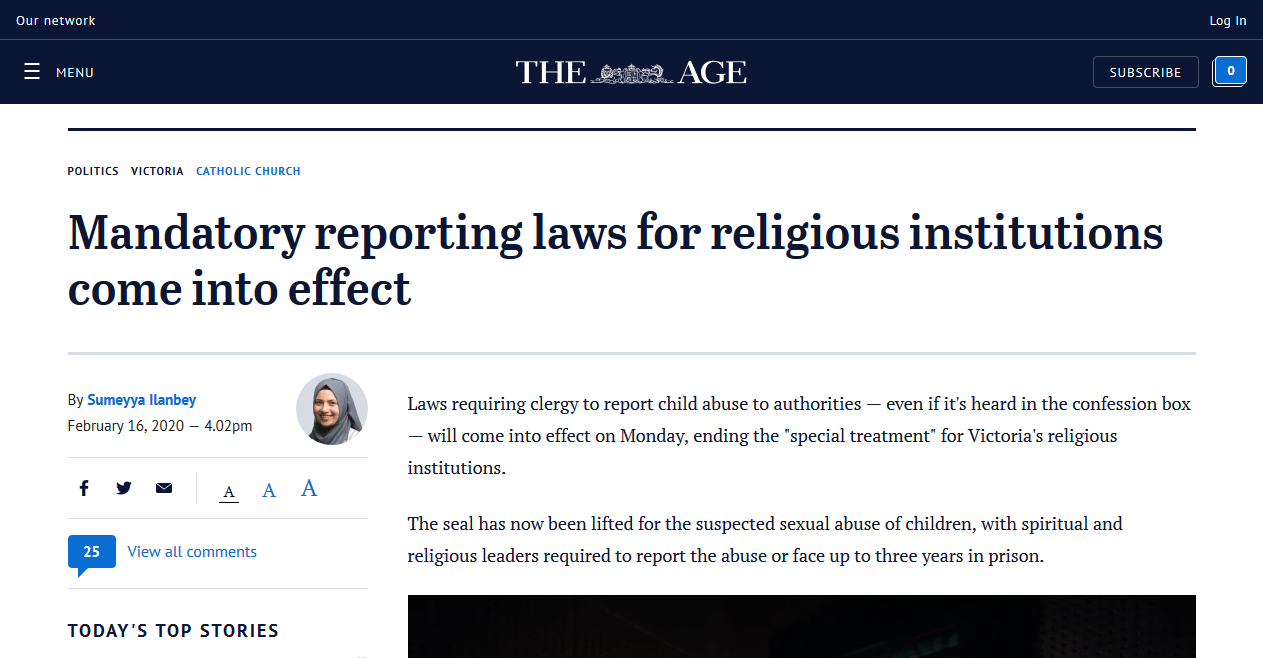 As of yesterday, any Catholic Priest hearing confessions in the State of Victoria, Australia, can be arrested on the spot. All the authorities need is to send an agent and pretend to confess the sin of pedophilia. And then wait the statutory length of time for the priest to report the sin to the local authorities, and if he does not, arrest him on the spot. (See yesterdays’ report in The Age)

But if a priest were to do as the new law requires, then he would fall foul of one of the most severe penalities in Church Law.  Because to violate the seal of confession every Cardinal, Bishop or priest, earns an immediate latae sententiae excommunication, reserved to the Apostolic See, according to canon 1381 §1. Reserve, here, means that it cannot be lifted except by direct, verbal intervention of the Roman Pontiff or his delegated subordinate.

Canon 1388 – §1. The confessor, who directly violates the sacramental seal, incurrs an excommunication latae sententiae reserved to the Apostolic See; but who does so only indirectly, let him be punished according to the gravity of the delict.

§2.  The translator and anyone else, spoken of in canon 983 §2, who violate the secret, let them be punished with a just punishment, not excluding excommunication.

The law which was pushed by anti-Catholic bigots, secularists, feminists, atheists and Muslims, is intended to completely destroy the Catholic Religion. This is because the confession of sins is a central act of the Catholic Faith which is a necessity of every Catholic at least once every year. If Catholics know their priest is willing to break the seal of confession for any reason, they will not be able to practice their religion.

The law also allows open persecution of the Catholic Clergy. Any priest, who might speak out on any topic, can now be targeted by this entrapment at any time he hears confession. Let us not imagine that this law will NOT be used to attack the Clergy who speak out against abortion, sodomy, Freemasonry, etc..

Ways Priests can protect themselves

Priests can protect themselves by affirming publicly that they have no intention of abiding the by the law. This is a pastoral and moral necessity to prevent the loss of faith among the faithful of confidence in the clergy during the administration of such a sacrament.

At the same time, they can refuse absolution to anyone who actually does confess such a sin, if that person does not agree to self-report himself, and have him, upon such agreement, sign a contract authorizing the priest to report him. This would not violate the seal, because it is not a crime for the penitent to violate or authorize the violation of the secret. And his signing of the contract in the confessional would be a free act authorizing such a revelation.

Saint Alphonsus dei Liguori, doctor of the Church on moral questions, has long ago counseled priests to refuse absolution if penitents are not willing to make restitution or report themselves to authorities for such grave crimes as murder or homicide.

However, since the Church seeks first of all the forgiveness of sin, it remains that this law is nefarious in the highest manner and must be publicly denounced in the strongest terms by all the faithful.

Bishops should fight back

Any Catholic in civil authority who insists on such a law is clearly subject to canonical penalties and who solicits such a revelation of the seal from a priest, causing him to make such a revelation is ipso facto excommunicated by Canon 1329 §1 as an accomplice. Bishops should declare their intention to declare and impose such a penalty, to make it absolutely clear that they will not go down without a fight.

A Law which cuts both ways

Finally, the law has obviously come out of the mind of someone who does not have the foggiest notion of what Confession is or how it is practiced. Because perhaps 99% of the penitents who come to make confession are unknown to the priest. In confession, the identity of the penitent is not disclosed by the penitent. So against whom would a priest file a report, if he did observe the law? He could just as well tell the police the penitent looked like a member of Victorian Parliament which passed the law, than a Catholic whom he has never seen before. Is Victoria State prepared to start arresting everyone on the word of every Catholic priest?

CREDITS:  The Featured Image is a screen shot from the article in The Age, newspaper, cited here above in this editorial and is used in accord with the fair use standard for such commentary.