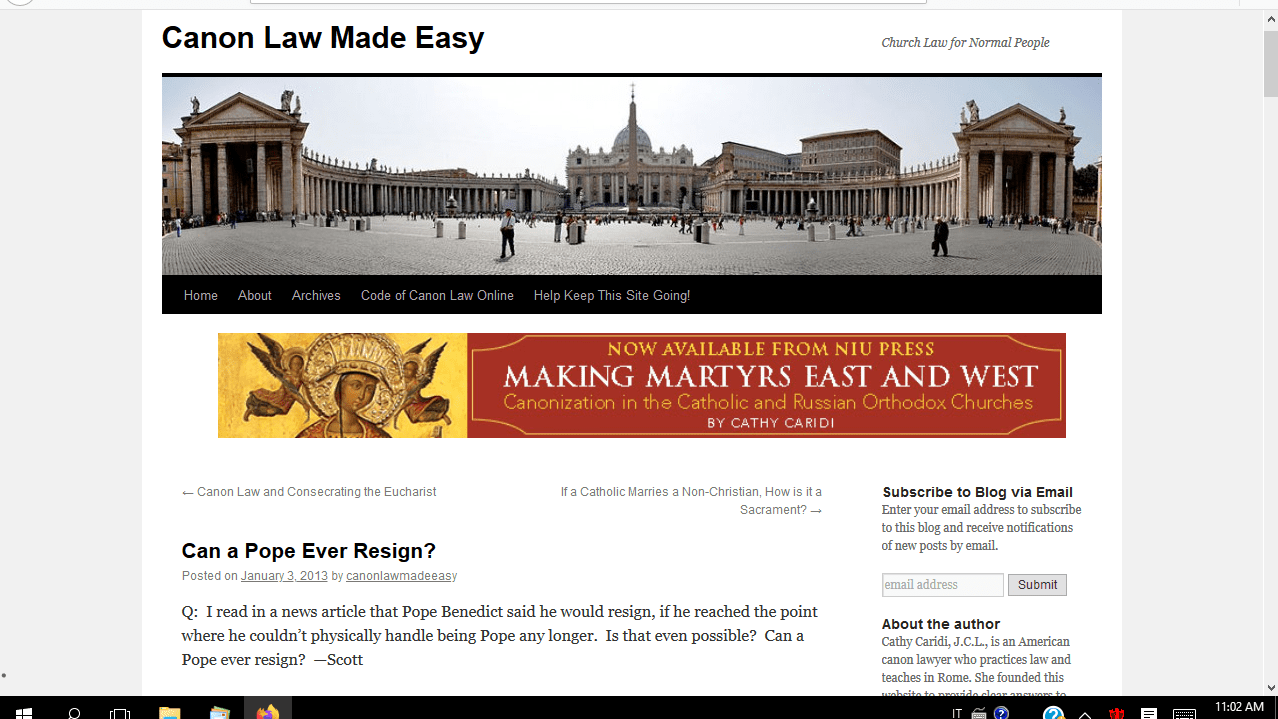 I am impressed with the growing number of canonists who off the record are admitting that they recognize that Pope Benedict is still the true pope, because his renunciation was doubtful. While the fact that nearly all of them work for the Church, prevents the ones I have spoken with from being eager for public recognition of their stand, others have in the past admitted the truth of the problem.

One Canonist who spoke explicitly about the issue was Cathy Caridi, J.C.L.. Those letters after her name signify that she eared a Licentiate in Canon Law from a faculty recognized by the Apostolic See.

In a post, entitled, Can a Pope ever resign?, she explicitly discusses the meaning of Canon 332 §2 and what it requires.

Only one canon of the entire Code of Canon Law makes any mention of this. Canon 332.2 states that if it happens that the Roman Pontiff resigns from his office, it is required for validity that his resignation be freely made and properly manifested, but it isn’t necessary that it be accepted by anyone.  At first glance, it may strike readers as a rather odd thing to say at all!  But when it’s read in the context of the entire Code of Canon Law and viewed in light of Catholic ecclesiology, it makes perfect sense.  After all, the Pope is a bishop, the Bishop of Rome

After discussing the renunciation Bishops, she returns to the discussion of the Pope, addressing conditions for the renunciation, in order, first liberty. And refers her readers to Canon 187, which explains in what the necessary liberty consists.

But it is the next part, that she makes the explosively correct statements about the facts of law, that nearly everyone has been ignoring for 7 years:

The very next canon talks about external forces being brought to bear on a person who resigns his office.   Canon 188 observes that a resignation is invalid if it is made because of unjustly inflicted grave fear, deceit, substantial error, or simony.  How would this panoply of situations apply to the Pope.

What is nearly prophetic about what she says, is that she touches upon a pope who on account of a misunderstanding, resigns incorrectly and thus, whose resignation IS INVALID IN VIRTUE OF CANON 188:

“Substantial error” is harder to envision in the case of a papal resignation. Such error can theoretically occur if the person holding an ecclesiastical office incorrectly thinks that (for example) he is required to submit his resignation after holding it for a certain number of years, or when his superior dies and is replaced by someone else.  A resignation that is made as the result of such a misunderstanding is invalid under canon 188.  When it comes to the Pope, who knows full well that his office is intended to last until his death, it is difficult to imagine that he could make such a mistake!

Here she uses a classic example of a substantial error which arises out of errors of fact or law, using timing as the example. An error is called substantial, because it corrupts the whole substance of the juridical act. As one can see from canon 126, this can occur through several causes. Caridi was not a prophetess, so she did not discuss errors which arise from renouncing the wrong thing, however.

Finally, she boldly affirms that an ambiguous renunciation is invalided by Canon 332 §2 itself, in its clause on due manifestation:

We can now see all that canon 332.2’s phrase “freely made” entails.  But there is definite uncertainty about the exact meaning of another phrase of canon 332.2 which asserts that a Pope’s resignation has to be “properly manifested.”  Would the Pope have to announce it in the presence of the College of Cardinals, for example?  Nobody really knows—but since the Pope is the Church’s Supreme Legislator, he can interpret this law however he wishes.  In the end, therefore, it wouldn’t really matter, so long as the Pope’s decision was expressed clearly, i.e., neither ambiguously nor secretly.

You can read the entire article she wrote, here.

You might be scratching your head, right now, and asking why no one has ever spoke of Caridi’s opinion before? Why did it not cause a controversy or storm of arguments?

That is because, what I just quoted, came from a post on her blog, Canon Law Made Easy, from January 2013, when the Catholic world was still Catholic and Trad Inc. was still sane!

Here at FromRome.Info, unlike many other blogs and websites, we keep the same categories and meanings of words and laws as they were on Feb. 10, 2013. We do not change.

Modernists change the meanings of things to push the revolution they back.

So when next you hear someone say, Bergoglio is certainly the pope, ask them, on what day they changed the meanings of the words in the Code of Canon Law!

CREDITS: The Featured Image is a screen capture of the blog page of Cathy Caridi cited in this article. The quotations from her blog are used here according to the fair use standard for editorial commentary.