First, let me ask everyone to pray for the dead and for the living. This is our first duty as Christians and human beings.  The articles I am publishing on mortality rates should not be but a passing observation or interest. Our real interest should always be in caring for others, body and soul, as much as we can, but especially with those whom we have an obligation.  If you have grandfathers and grandmothers, or aged parents, you should be making time or plans to make time, to help them and be near them, or take them into your own home if they have no one to care for them where they live.

The ratio I reported yesterday from Ramuzzi and Ramuzzi regarding the victims of Corona virus being 80% male and 20% female has sparked my curiosity as an Anthropologist who was trained in the statistics of social phenomena.

The reason why this ratio merits attention, is that it tells us something about the virus which has not yet been reported and which will help us react to this crisis rationally. And I am not the only one who has noticed anomalies in the statistics for Coronavirus in Italy.

Scientifically, we know that a virus has no brain and therefore cannot willingly chose men over women.  So there has to be something about the virus genetically or about its manner of transmission or about the medical conditions of men and women which put men at higher risk than women by a 4 to 1 ratio overall.

Overall is a hard number to be imbalanced

This ratio of 4 to 1 is way out of balance for an overall statistic.  To arrive at such a balance there has to be factors which are much higher than 4 to 1, which impact this statistic in a partial way, so that when averaged out with all the other causative factors, the ration falls to 4 to 1.

So this has put me on the path to search for them.

Ratio of males to females in Italy

Obviously the first statistic to look at is the ratio of men to women in Italy, to determine if this fundamental ratio has anything to do with what we are seeing in this imbalance.  This is because if a town has 50 men and 50 women, then you are likely to see even ratios for any accident or disease which is not associated with gender. But if the town has 80 men and 20 women, you are apt to see that same ratio in all accidents and diseases which are not associated with gender.

In Italy there are 30.974 million women and 29.384 million men, according to Statista.com. Not a perfect balance, but obviously a ratio which cannot be causing the imbalance we are looking at in Coronavirus victims.

Ratio of males to females in Infected Areas

However, one cannot discount this demographic ratio all together, because in all parts of Italy this ratio will not prevail. There will be local variations. Perhaps some are causitive.

Lombardy, the epicenter of Coronavirus infection in Italy — on account of an Italian citizen bringing it back from Munich, Bavaria in the 3rd week of January, is the first place to consider, especially because for the common winter influenza it is also the epicenter in Italy for numbers of infections.

In Lombardy, then, let us look to see what that ratio is, because Lombardy is the region most affected by Coronavirus. According to TuttaItalia.com, in 2019 the gender ratio in Lombardy is 4.9 million men and 5.1 million women. Not much different than the national ratio.

The first presumption I have is that this ratio of 4 to 1, which I am investigating, has a lot to do with HIV infections in the Italian population. And in fact, in a peer reviewed Journal paper at BioMed Research International, authored by Dr. Camoni et al. in 2014, it was reported that the ratio of HIV infection in the general population is 0.10 per 100 for males, and 0.02 per 100 for females, or a ratio of 5:1. The total population of those infected over 15 years of age is 115,000 to 150,000. Lacking immune system health on account of the ravages of this virus, these individuals will be highly prone to risk from coronavirus. The fact that those who contract HIV have high levels of personal interaction in an unprotected manner with others who act similarly — this is the primary cause of HIV infection — also means that one is likely to expect that members of this population will be rapidly infected with Coronavirus as soon as it becomes prevalent in their locale.

Since this ratio is 5:1, greater than the anomaly we are seeing in Coronavirus 19 deaths in Italy, then it is a likely candidate to be a causative factor, because it is more imbalanced, and that is necessary because there will be undoubtedly many factors causing this imbalance, but of them all there will be those with more or less the same ratio, so when you find a possible causative factor which is more imbalanced, of which there are few such factors, it becomes more probable a fact which is producing the anomaly — though this is pure speculation on a merely statistical factor. However, when one considers that HIV reduces immunity response and that immunity response is essential to defending against Coronavirus 19, then one cannot discount it.

Another aspect to look at is whether the mortality rates for known risk factors for Coronavirus, such as cardiovascular diseases, diabetes mellitus or cancer have an imbalance among men and women, because if they do, they could be causing the imbalance we are seeing among Coronavirus victims.

According to the Instituto Nazionale di Statistica (National Institute for Statistics), the  gender ratios for for Cardiovascular disease mortality in 2012, for persons ages 65-84, was 158,000 men to 124,000 women. This is a ratio of 5 to 4, and thus might be influential, but not as other factors.

According to the Ministry of Health report Genere come determinante di salute, published in 2016, p. 39. the ratio in 2009 of those who smoke tobacco, is was 28.9% of all men and 22%  of all women.  This is nearly a ratio of 4:3. However, if you look at the graphs on p. 40 of that report, you see that the mortality for chronic smokers increases exponentially for both age groups at similar ratios.  This is unlike Coronavirus 19, which peaks at 70-79 years of age and then falls for those who are 80-89 or older.

Mortality for Cardiovascular disease by gender

As can be seen, specific conditions can have different ratios of mortality according to gender. This is even more true in cardiovascular diseases, the ratios of mortality of which, by gender, vary wildly. Here is just one graphic, which I excerpt from the European Journal of Preventive Cardiology, from a paper entitled, Cardiovascular Health in Italy etc.., published in 2015: 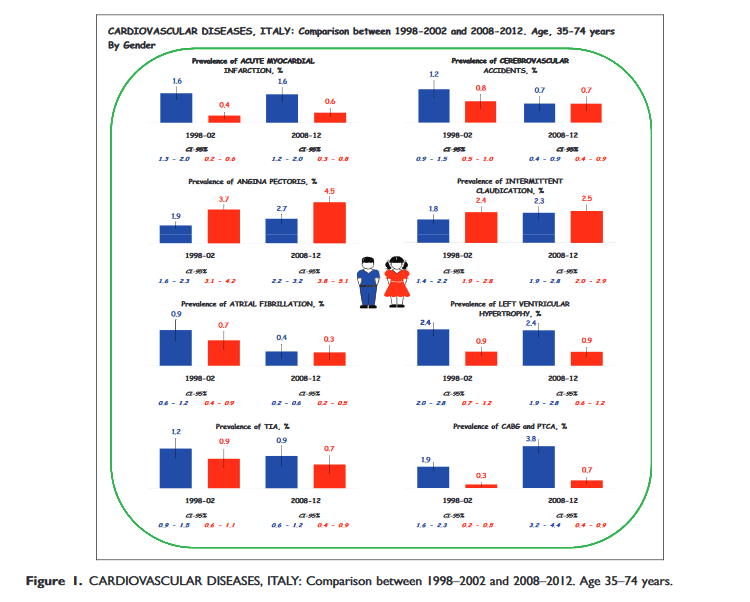 Such conditions as myocardial infraction and left ventricular hypertrophy show ratios nearing 4:1 for men to women.

As can be seen, this simple statistic of Coronavirus mortality being 80% among men and only 20% among women can lead to the discovery of not only who is at risk but why those who are infected die. While a rigorous scientific study cannot yet be done, the data I have reported here can give us perhaps a preliminary look at what might be likely.

As regards to the response to the Coronavirus, the extremity and panic among journalists, politicians and clergy — three groups known also to have high rates of HIV infection — also seems to indicate that this crisis is very personal to them, though are not telling the public why that it is the case.