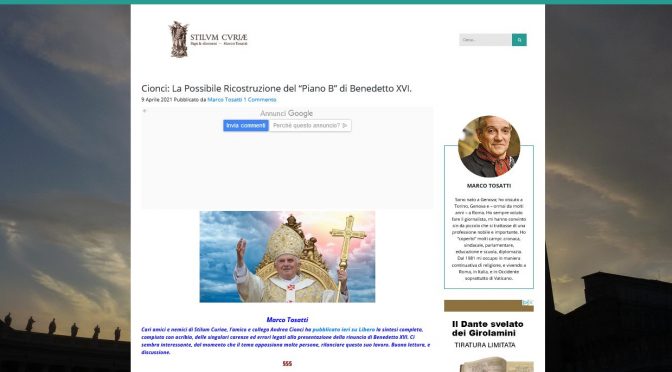 April 9, 2021 A. D: This morning, Marco Tosatti, one of the most senior Vaticanista here in Italy republished Andrea Cionci’s article on Benedict’s Plan B.  While this may not seem to be newsworthy, it merits nevertheless to be brought to the attention of the English speaking world, which has nearly no newspapers, electronic journals or TV channels who are willing even to speak about the incontrovertible anomalies in the reality of what Benedict XVI did and did not do.

Let Life Site News, The Remnant, National Catholic Register and Catholic Family news take note, and let their readers ask them why they are censoring the news.

Let 1 Peter 5, Dr. Taylor Marshall, Church Militant, EWTN et alia, take note of what Tosatti just did, and let their viewers and readers ask them why they are censoring the news.

In this manner, all these groups, knowingly or not, willingly or not, have been coopted into the narrative control of the Globalist Reset, wherein Bergoglio is the new Messiah and Benedict has betrayed humanity.

All these by remaining silent are running cover for the Bishops in the English speaking world who cling to Bergoglio as the sine qua non of the New Normal.  As a consequence, they make all the lies, frauds, crimes, heresies, apostasies and treacheries of Bergoglio possible. If they protest Bergoglio, it is like the man who protests the Scamdemic while wearing a mask and insisting on the vaccine.

Let them and their readers, followers and viewers meditate on that. In the mean time, they can read Cionci in English at FromRome.Info.

On the contrary, Marco Tosatti has the integrity to allow the facts present themselves and the discussions be aired. That does not mean he agrees with them 100%, but it does show that he is not controlled by globalists.

I publicly call on the media in the English speaking world of Catholics to do the same. It is time to stop calling FromRome.Info “unreliable”. After all projection as a psychological trick, is the tactic of Marxists.

CREDITS: The featured image above is a screenshot of Tosatt’s official blog. Click here to read it in Italian.