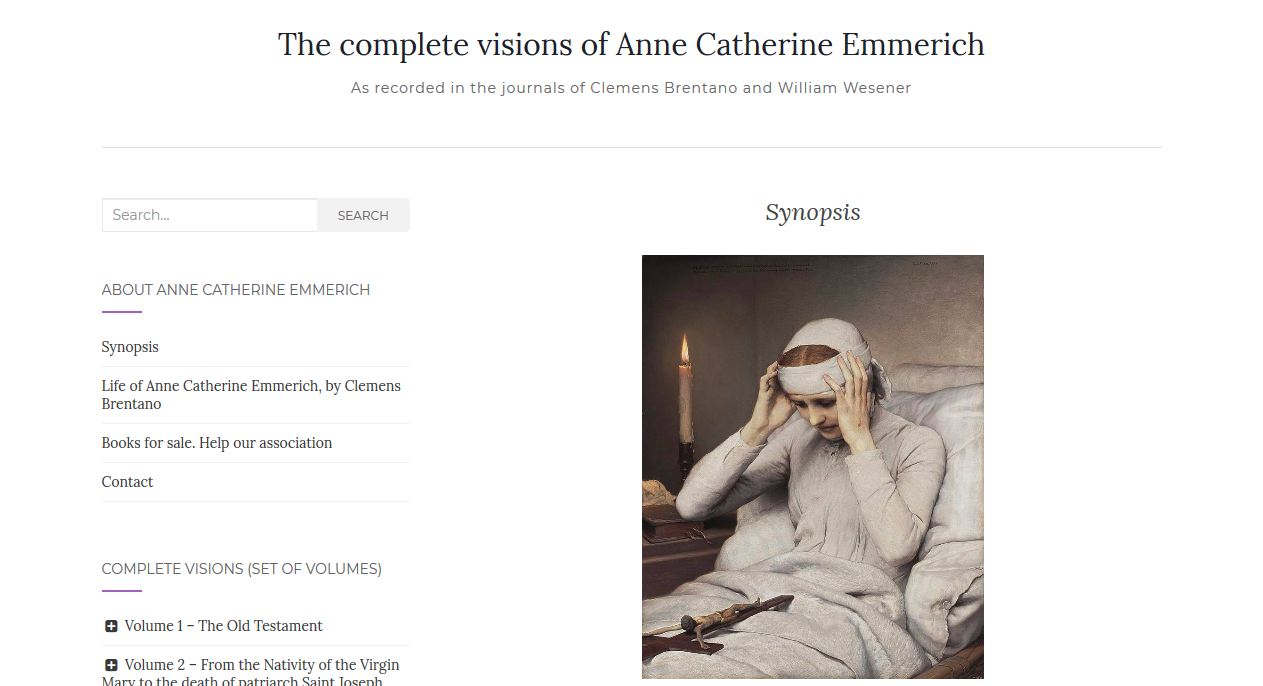 Pope John Paul II warned us of the present crisis in the Church when he approved the beatification of Anna-Katerina Emmerich, on October 3, 2004, exactly 15 years to the day on which Bergoglio presided over the ceremonies of idolatry in the Vatican Gardens, on Oct. 4, 2019.

Did the Polish Pope know something we did not? — I think the Polish pope had more Catholic sense than 99% of the Clergy today, because 1) he read the prophecies of Bl. Anne Catherine Emmerich, and 2) he put trust in them.  We can see this in that he raised her to the dignity of the Altar, as a woman whose example of Christian virtues was heroic in an exemplary degree.

And not only that, he at least recognized that a papal renunciation could be invalid, and that a Conclave can be illegal (see here for more on this).

As for Bl. Emmerich, on the day of her Beatification, Pope John Paul II said the following (source):

Bl. Anne Catherine Emmerick told of “the sorrowful passion of our Lord Jesus Christ” and lived it in her body. The fact that the daughter of poor peasants who sought tenaciously to be close to God became the well-known “Mystic of the Land of Münster” was a work of divine grace. Her material poverty contrasted with her rich interior life. We are equally impressed by the new Blessed’s patience in putting up with physical weakness and her strong character, as well as her unshakable faith.

She found this strength in the Most Holy Eucharist. Her example opened the hearts of poor and rich alike, of simple and cultured persons, whom she instructed in loving dedication to Jesus Christ.

Still today, she passes on to all the saving message: Through the wounds of Christ we have been saved (cf. I Pt 2: 24).

And if you want to see first hand evidence that the Anti-Church was outraged by her Beatification, go to the Vatican Website through the link I just gave you, and click on the name of the Blessed and you will be taken to a biography which tries to make it appear that she was a globalist!

And indeed, this is exactly what we see today: 2  Churches.

The Church of Light, which is the true Catholic Church as She has ever been: with the same Faith and Sacraments and Canon Law as she had up to Feb 28, 2013. Whose pope, Benedict XVI,  was recognized by all Catholics as the Vicar of Christ.

The Church of Darkness, which is the Church of the Anti-Christ which is turning the Mass into a factory of Sacrilege, by giving the Most Blessed Sacrament to public sinners and by offering the Holy Sacrifice, not in communion with the true Pope, but with the false imposter and usurper, Jorge Mario Bergoglio.

The Pope of the Church of Light is as Bl. Emmerich says, old, weak, with failing voice and paralyzed by inaction. He is surrounded by enemies on all sides and has few to trust in.

The pope of the Church of Darkness, as Bl. Emmerich says, is dark and has a sinister face and is inviting every heretic and apostate to Rome to build up a new church filled with idolatry and every form of immorality and blasphemy and error.

Read carefully what Bl. Anna-Katerina (this is the proper German form of her name) says and think about it.

She says in the part regarding the prayer requested by Our Lady, that the faithful should come to the Basilica of Santa Maria Maggiore and pray for the exorcism of the Church of Darkness. But the doors of the Church are closed. This means, that the Basilica will fall under the power of the false pope, and that his sect will exclude the true faithful from the Church.

And this is exactly what has happened and what is happening. The masses offered in that Basilica are offered for Bergoglio the anti-pope, not for Benedict the true pope. Priests and faithful like Don Minutella are “excommunicated” from the Church of Darkness for warning the faithful about it and its lies.

Notice too, that Our Lady through Bl. Emmerich asks the faithful to pray the Our Father. And precisely this spring, here at Rome, with the publication of a new Italian version of the Roman Missal, will Bergoglio demand that all start saying the false heretical version of the Our Father of his own creation.

Notice too, in her writings, that she say she came to the Basilica accompanied by Saint Francis of Assisi. This saint was seen in a vision on the night of July 16, 1208 by Pope Innocent III, saving the Church of Rome by holding up a corner of the Lateran Basilica on his shoulders, even while it was shaken by threats all around. Pope Innocent III was very devoted to St. Alexius of Rome, whose feast here in the city is on July 17. The Pope rebuilt the Basilica of St. Alexius on the Aventine and consecrated it on the very next day. So this vision of a poor man, on the vigil struck him to the core. The next day, Saint Francis paid him a visit and asked for the approval of his new community, the Friars Minor. The pope granted verbal approval immediately. The Saint’s Order has done more than many others greak works to defend the Church throughout the Centuries, with more Canonized saints than most others, excepting the Benedictines, perhaps.

So Bl. Emmerich is telling us something profound, namely, that the prayers requested are to save the Church of Rome from toppling to the ground. This is also seen in the prayers requested, because in the Rule of Saint Francis those who are not priests are to say 72 Our Fathers each day, in place of the 72 psalms which the priests say. This indicates that the faithful whom Bl. Emmerich sees come to the Basilica in vision, are laypeople not clergy. And this in turn indicates to us that the vision she had was of an apostasy of all the Clergy of Rome from the true Church.

Visions of Hope and Victory

Her visions give us hope, however, since in them she sees the doors of the Basilica open and allow the faithful enter and pray. This means, if we can rally enough faithful to pray each Midnight, whether before the Basilica, or around the world, that Our Lady is promising us the conversion of at least some of the clergy of the Diocese of Rome back to the Church of Light, and thus back into communion with Pope Benedict XVI.

In her visions, Bl. Anna-Katerina Emmerich saw the dark and sinister false pope break the Church in two and take the floor and back wall with him and flee Rome. This means that the Church of Light will have victory in this battle, and regain Rome, and that we should therefore make every sacrifice and effort to win that victory as soon as possible, with the means Our Lady indicated exactly 200 years ago.

CREDITS: The Featured Image is a screen shot of http://annecatherineemmerich.com/which is one of the best sources in English for the writings of Bl. Emmerich. It is used here in accord with fair use standard to draw attention to their website for those who want to learn more about the Blessed.

Br. Alexis Bugnolo has pledged to lead the prayers at Midnight, here at Rome,
in front of the Basilica of Santa Maria Maggiore. As a Franciscan hermit
in the Diocese of Rome he sees it as his duty before God.
See FromRome.Info’s Youtube Channel for the nightly recordings.
If we can get 1000 persons to sign up for that channel as subscribers
YouTube will allow LIVE BROADCASTS.
So please spread the word, and if you would like
to help Br. Bugnolo get some better equipment, please make a contribution here below.