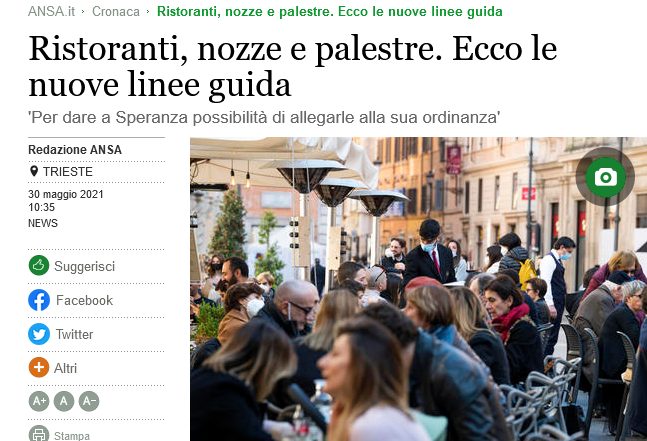 May 30, 2021 A. D. — The diabolic tyranny of Mario Draghi is ratcheting up its controls on the Christian peoples of Italy.  As of June 15th, it will be forbidden to celebrate Marriages, Baptisms, First Communions, Confirmations and any other public religious festival to anyone who does not have a “Green Pass”, certifying that they have been Vaxxed, cured of the mythical Covid-19 or been swabbed by a psychopathic medical employee in the last 48 hours — with a swab which is rumored to contain particles dangerous to human life, and in a manner which is possible to cause lesions, infections and brain death.

Mario Draghi is a former VP of Goldman Sachs and a known member of the Masonic Lodge.

This new decree, which went into effect on May 18th, as previously mentioned here at FromRome.Info has been applied by the Conference of Regional Governments in its latest communication. According to ANSA, the globalist news service, the liberty of citizens will be progressively restored so long as they receive the death-dealing, genetic-altering, sterilizing impotency augmenting Vaxx!

To read the original ANSA report, click the image above.

According to the universally hated and despised Minister of Health, Roberto Speranza, who is not a doctor:

“Our Country is much better, the road we are on is the right one.  We need to maintain the highest attention, but the numbers are getting better and this is the moment to program the Future!”

If anyone cannot see now that the Scamdemic is all about establishing a Masonic Tyranny upon humanity, by means of stamping out Christianity, he is blind.

In other news, Mario Draghi is reportedly planning to dump his Cabinet of Technocrats and replace them with those openly supporting a total Dictatorship. The Globalists evidently believe that if they dissolve the institution of Democracy they can count on greater loyalty of the armed forces.

If Draghi thinks he will not suffer the same misfortune as Mussolini, I think he is gravely mistaken. The Italian people are fed up. 80% are refusing to take the Vaxx. The wearing of the mask is going quickly out of fashion among the trend setting youth.