It seems that Klaus Schwab, the founder of the WEF, wants attack events like this to justify incorporating into internet structures, structures of information control and censorship. How convenient! 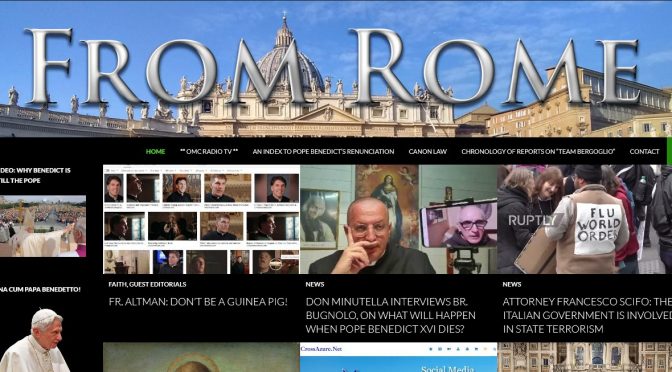 From the statistics you can see the magnitude of what has been going on, here at FromRome.Info.

The Cyber War declared on FromRome was about 20x greater in magnitude than the standard background hack attempts against the website.

FromRome.Info could not have defended against this massive attack without the help that its readers had given in the previous weeks to upgrade the server and increase its physical capabilities.

The bruteforce attacks and complex attacks have been totally repelled, and the cyber campaign against FromRome.Info is now nearing its end as our server has blacklisted nearly all the servers used in the attack.

The victory in this battle belongs to the Readers of FromRome.Info who were so generous, so promptly, that I was able to unwittingly make preparations for defense, before even knowing an attack was being planned. Without your help, FromRome.Info would have been taken down and perhaps even damaged.

TECHNICAL ANNOUNCEMENT: I expect to be able to revive Commenting and the Top 10 List in a day or so. I ask your continued patience.

In the last 24 hours, FromRome.Info has sustained more than 100,000 attacks from a sophisticated cyberwarfare system, believed to be headquartered in the United States, Cyberwarfare unit.  The system is powered by highspeed supercomputers and highly advanced artificial intelligence. The purpose of the attack is to prevent FromRome.Info to publish counter narrative information, i. e., the truth. The attack began shortly after FromRome.Info published a link to Global Research, outing MI5 and the CIA for a plot to assassinate the anti-Scamdemic leader of Belarus.

FromRome.Info is not the only site being attacked. Attacks of this kind are spreading round the world. The leading prolife group in Italy, “Pro Vita e Familiga” has had their web-server attacked similarly in the last month, after they announced their opposition to the proposed law which would make the LGBT inhuman ideology the de facto state religion and state psychosis of the Italian Republic.

The attack against FromRome.Info is attempting to gain entrance to our website by calculating how long and under what conditions the web server of FromRome.Info takes to repell an instruder. For this reason, since the attacks are exceeding 5 per second, FromRome.Info had to turn off the capacity of this site to receive new subscribers and post or allow comments.

I personally suspect that this is the new normal. and that it will never end. It is a very effective way of intimidating independent publishers and to intimidate their hosting companies to drop them as clients. Also it prevents the sites normal functions to grow readership and engage readers in conversation.

Joe Biden just appointed as head of the US Cyber Defense Commission a former CIA agent involved in overthrowing the Catholic government of Vietnam and in destabilizing that country.  My colleague, Andrew Baalman opined to me the other day, that his appointment means a planned and sustained cyber attack on all counter-Globalist websites in the future. It seems he was correct.

However, as I am head of a Catholic Military Order, when guns start firing, I do not freeze with fear, but boil with zeal, and so, I will continue to publish articles through this battle.

I thank all the supporters of FromRome.Info, who recently assisted in the upgrade and move of its server. This is the only reason this site has not yet been taken down and can fight on.

Finally, I ask your prayers, therefore, to Saint Michael the Archangel and to the Lord of Hosts that by his help and His grace I might have victory in this battle.

PLEASE NOTE: That comments have been disabled for security reasons, for the time being.