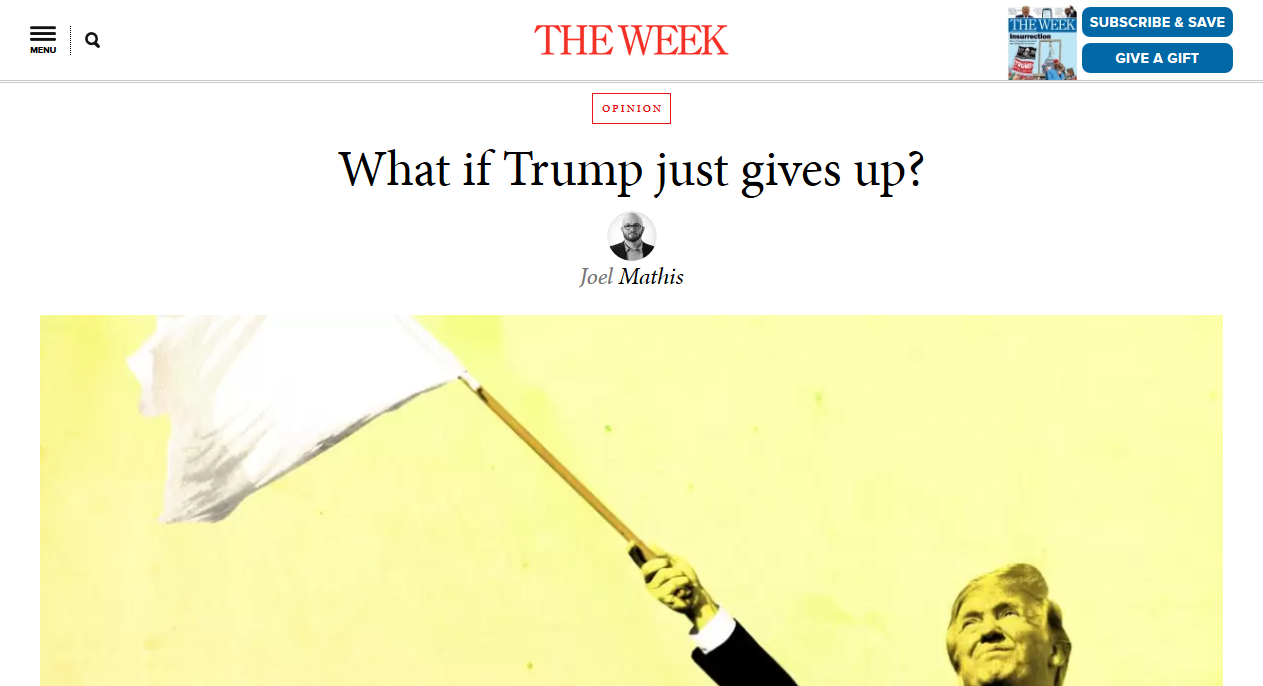 The article from June posed the question, “What if Trump just gives up?” Its author, Joel Mathis was not being a prophet, rather he was dropping the crumbs of the plan ahead.

However, what Trump has just done: win the election but then surrender, is a truth which is as shocking as it is irrational.

On November 23, I said myself that Trump would surrender and give up. I too, am not a prophet. I made that call on the basis of the research done by A. J. Baalman over at Ordo Militaris Radio TV this summer about the origin, nature and goals of the Deep State.

So it has to be said, to help all of you who were mislead for 5 years, that Trump was never about Making America Great Again.  Because that is not a slogan, but a battle cry.

But Trump would not fight for it.

Yes, he fought a legal battle, but as I pointed out in my Nov. 23 video, his lawyers knew they would lose or that they were not asked to win. Indeed, the Governor of New Jersey, Christie, mocked them for saying one thing in public during press conferences and filing cases which said another thing, weakly, in court.

Courage, on the other hand, is the infallible sign that a man believes in his cause and cares for others. A man who surrenders so easily in circumstances in which he has all the power to win — and he had the supreme power of the presidency — was not and is not a courageous man, a virtuous man, and man who really cares for anyone but himself. Courage moves a man to fight, and really fight, not just pretend to fight. But Trump had not this virtue.

All of this is impossible to understand, comprehend and thus accept — because it seems so irrational and inconsistent — until you accept the facts of history: namely, that Averell Harriman, the founder of the Brown Brothers Harriman Bank, has controlled the GOP and Democrat Parties for more than a century. And the Harriman Bank loaned money to make Fred Trump a successful businessman.

Harriman is a Skull and Bones man. And it is not a coincidence that Trump showed his gratitude to Harriman by giving the official historial of the Skull and Bones Lodge an office at Trump Tower, Manhattan, for many years.

So what does it all mean?

It means that Trump was not about MAGA. He was about being a pied piper to keep the sheep in the Marxist sheepfold and to prevent a true American candidate who would put Obama, Biden and Hiltary — Trump’s life long friends — in prison.

He succeeded so well that some will be deluded into thinking he really was about MAGA for the rest of their lives.

We live in an age of liars, bold and audacious liars.

And Trump’s quick surrender after being betrayed by Biden is the sign that he was the boldest and most audacious of them all.

No, Trump does not love you, he does not care for you. He never intended to drain the swamp, because he and his family have always been swamp creatures.

Judge a man not by his words but by his deeds.

If we had listened closer to Christ, we would have seen all of this earlier on.

The moral of the story is, NEVER VOTE REPUBLICAN OR DEMOCRAT again! And never vote for a creature of the swamp.

I say all this not to irk anyone, but to deliver you from the 5 year Obama organized psyop on America.

And what does Trump get from it. He leaves with hundreds of millions of fans who will visit and stay in his hotels for the rest of their lives. What a business man! (sarcasm)