Knowledge of the future is a remarkable thing. It is had naturally by God alone. It is had by all the Saints and Angels of Heaven inasmuch as God hides nothing from them, which He Himself knows by nature. It can be had by holy men on earth, inasmuch as they are friends of God and He reveals something of what He knows by Nature, as may suit their mission of service to Him and His Church. It can be had by learned men, inasmuch as they know the causes of things past and future and through wisdom and prudence make a good guess or estimation of what will come to pass.

But in any case, knowledge of the future is a remarkable thing, because it is very rarely seen.

This is why I consider it necessary, from time to time, to speak of such knowledge in regard to the present crisis in the Church. Its existence shows up the straw men arguments of those who way Bergoglio is certainly the pope, in their absurd accusation that those Catholics who remain loyal to Pope Benedict because they remain loyal to Canon Law, have made up the entire controversy.

There are no words but these to describe what I am about to publish in the English speaking world for the first time.

So let me cut to the chase, and quote from the book, printed in Italy, in 2006, from a manuscript completed on Oct. 7, 2003, entitled: Gesù Risorto Sta Per Tornare (The Risen Jesus is about to return), published by the Association, “Amici dei Carismatici Cattolici” (Friend of Charismatics), and subtitled, “La Venuta Intermedia di Gesù secondo la Bibbia, Teologia e Profezia” (The penultimate coming of Jesus according to the Bible, Theology and Prophecy), from the second revised and enlarged edition.

It is important to note, that the book uses the term, Charismatic, in the Catholic sense of the term, as someone who is faithful to the grace of the Holy Spirit in the discernment of prophecy, and not as is used in the English speaking world as someone who follow the Protestant Charismatic Movement.

The Key Passages of the Book

Here, then, is my English translation of the passages which speak of the Two popes. First, page 77, second paragraph:

Another study on the penultimate Parousia was published in sections in the magazine, Messaggi Carismatici Cattolici, which on the basis of private revelations succeeded to reconstruct in a certain order the biblical prophecies. In this study on the penultimate Coming of Jesus it talks of a true and “false pope”, that is of the ecclesiastic Anti-Christ, who both will co-exist after the death of the present Pope John Paul II. To speak of an anti-pope is not an ecclesiological fantasy, because in past centuries there have been several cases, but it treats now of a “false pope” and that he might be elected from within the ecclesiastical Freemasonry, which is gathering strength daily inside the Church. One trust worthy source (reported by the L’Espresso, Dec. 12, 1987) affirms that in 1987 the Mason and journalist, Pier Carpi — in confirming the recruitment as his “brother” of Fulberto Lauro, according to whom the Lodge P2 counted as members even Cardinals and Bishops under false names — specified that “it is called the ‘Ecclesiastical Lodge’ and it is in direct contact with the Gran Master of the United Lodge of England, Duke Michael of Kent. Such a Lodge has be active in the Vatican since 1971. There belong to it more than 100 men, including Cardinals, Bishops and Monsignori in the Roman Curia. They have achieved to keep an absolute secret of their existence, but were detected by the powerful men of Opus Dei.”

21. What is the true outline for the near future according to the message of charismatics?

In the context of the actual Great Apostasy (cf. St. Paul, 2 Thess. 2:3-4), that is  of the loss of the Faith in many, after the death of John Paul II — who according to the messages of diverse charismatics will have the “palm of martyrdom” — there will be manifested the ecclesiastical Anti-Christ who will ascend the Throne of Saint Peter. Simultaneously, there will be both the “false pope”, that is the ecclesiastical Anti-Christ, promoted by the ecclesiastical Freemasonry (Apocalypse 19:20 calls him the “false prophet”), and the “true pope”, the true successor of Pope John Paul II, who at the beginning will be hidden and will be followed by a minority (a small flock) of Catholics, above all by authentic charismatics and by their movement. There shall be at that time a great schism in the Church: the majority of Catholic Christians will follow the “false pope”. The promise of Jesus: “The gates of Hell shall not prevail” (Matthew 16:18) will be accomplished in a special manner in that historic moment, as Jesus Himself confirmed in a message given to a charismatic (F.C.):  “I will save the Church in an extraordinary way with you” (speaking of charismatics).

The true charismatics will have an importat role at that moment, because it will be precisely they who will indicate who is the True Pope, the true successor of Pope John Paul II: he shall be the one whom one must follow to remain in the true Church of Jesus Christ: Ubi Petrus ibi Ecclesia, as the Fathers of the Church are wont to say, that is, where Peter (and his true successor), there is the true Church.

The next quote is from the End note to the section I just translated, and is found on p. 296:

In the book of Johannes de Parvulis, La Guerra Mistica, published by Segno, Udine, in 2002, on pp. 27-29, he talks of “The Election of a Pope: the conditions for validity”, and says that there exist arguments which permit one to establish with absolute certainty if a pope is false. Then he continues, saying, “Here are some examples:”

A. An irregular election: If the pope has not yet died, of if he has not voluntarily resigned, without contraints, the election is irregular. The new “pope” is a false one.

B. An irregular election: If in the Conclave the number of Cardinals is not that which is required, in this case the election is irregular. The new “pope” is a false one. To guarantee that this number not be altered during an election, the vote of the Cardinals has to be personal and secret. For example, it should not be made electronically, nor publicly, nor given through a proxy, or given telematically, by one outside the Conclave, from a hotel etc..

C. Contradictions (of the Magisterium): The Magisterium of the Church cannot be true and false. That would be a contradiction. A “pope” who would deny what his predecessors had already infallibly decreed at the level of the Magisterium, would not be a Pope but an imposter, a faker clothed as a pope. In the case of a future fake pope, it is possible that these 3 circumstances will present themselves simultaneously at once. Thanks to them, the persons of good will will be able to find direction and know where is the Truth.

I honestly think that there is nothing I need to add, except perhaps a photo of the Book Cover, which has a ISBN number 88-88351-08-6, and can be purchased still in Italy, from EuroLibro. 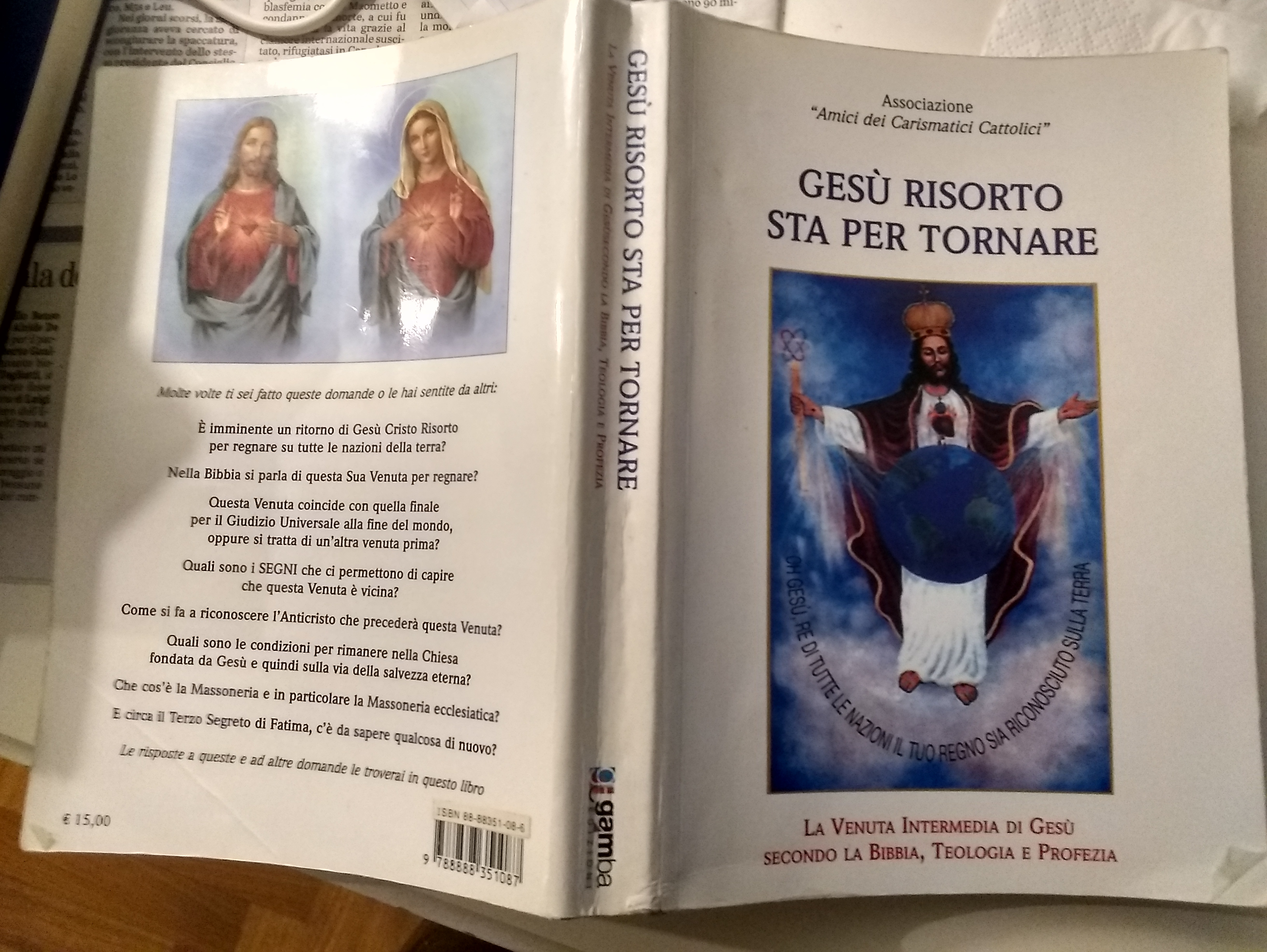