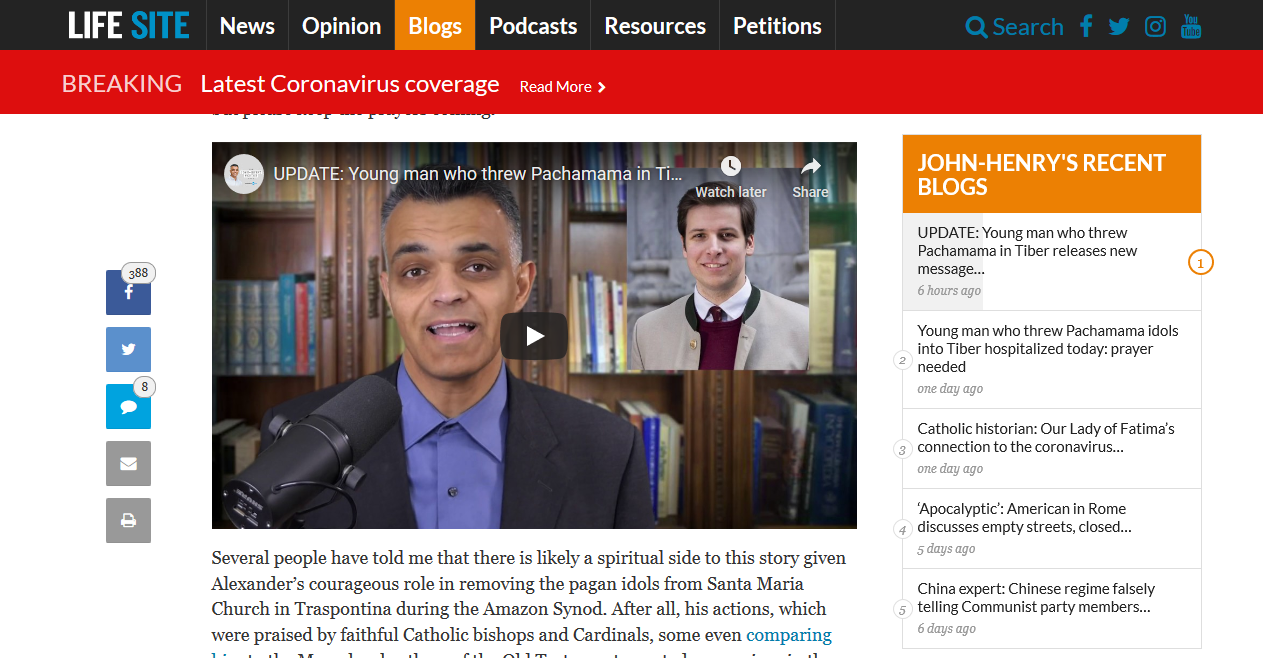 The enemies of Pope Benedict XVI are not Catholic in their manner of thinking. And as the facts and evidence of this comes forward, I will be publishing short articles to expose them.

Today’s exposé is on John Henry Westen. In the face of the disturbing news that Alexander Tschugguel, one of the Austrian Catholics who bravely threw the idols of Pachamana into the Tiber River back in October, has come down with COVID-19.

First, let us all pray for Alexander and for all Catholics who are ill anywhere of anything. But I have to point out second, that being sick from coronavirus does not make you a more special person than anyone else. From the facts surrounding Alexander’s infection, I do not think he got sick on his trip to Munich. That is not my purpose of writing.

I want rather to point out these stunning and shocking words of Westen:

It is very likely that Alexander was cursed or that he is a special target of the evil one whom he has infuriated by his holy actions.

So, in addition to praying for him, let’s all do some fasting too since the Lord told us that some demons only come out by prayer and fasting.

Sick people “have a demon”?

You can cure people of disease with an exorcism?

Wait one moment, this is not Catholic theology. This is paganism and tribal religion.

But in these cases, the devils have no role. Indeed, in Catholic Theology devils have no role in causing infectious disease, because such disease is caused by living organisms, of whom God alone is their Creator and Lord. They are not caused by demonic activity, possession or obsession. And there is really no reason God has to ask a demon to move a germ to infect anyone, since He has His Holy Angels to do the punishing.

I do not discount that a demon might inspire a sick person to infect you by physical contact, but that is not the same thing as being possessed by demons.  If you are sick, see a doctor, not an exorcist.

I also do not discount that there are apparent diseases which are caused by demonic forces (as in the case of Job 2:7), which medical science cannot explain or cure, but which in the New Covenant are cured by exorcism by a Catholic priest, or removed by demons to make a worse sort of deception take hold of men.

But a sick person by corona virus is none of these things. And it is profoundly disturbing that Westen has resorted to the theology of a witch-doctor to explain the plight of Alexander. This is a knee jerk reaction of someone involved in a pagan cult, not the reaction of a Catholic to the plight of a fellow catholic.

I know what I am talking about, as at the University of Florida, where I earned a B. A. in Cultural Anthropology I had to study the pagan religions of the Caribbean and Latin America.

So the next time you think to follow the advise of John Henry Westen, I think you should think twice.

Here is the true teaching of Scripture on what to do in times of plague, and it is not an exorcism:

13 If I shut up heaven, and there fall no rain, or if I give orders, and command the locust to devour the land, or if I send pestilence among my people:

14 And my people, upon whom my name is called, being converted, shall make supplication to me, and seek out my face, and do penance for their most wicked ways: then will I hear from heaven, and will forgive their sins and will heal their land.

CREDITS: The Featured Image is a screen shot of the page cited in the article and is used here in accord with fair use standards for editorial commentary.