Rome, February 14, 2015:  During his address to the College of Cardinals, this morning, Pope Francis emphasized over and over the importance of fraternal charity and of not-rocking-the-boat.  His exhortation expressed the same personal religion of his, which the From Rome blog detected and criticized in his analysis of Pope Francis’ opening speech to the Extra-Ordinary Consistory on Thursday, namely:

This attempt and goal of the discourse is emblematic of the fundamental theological error promoted by Cardinal Bergoglio during his pontificate as Pope Francis and throughout his life, as recently indicated by Jack Tollers, a criminal prosecutor from Buenos Aires, whose interview we published this morning.  This error consists in a sociopathic presentation of the Catholicism, that is, the insistence that “being a Catholic” has nothing to do with the observance of the moral law or the assent of dogmatic faith to the teachings of Jesus Christ, but consists rather in a merely human convention and agreement to go-along and get-along no matter what heresies or immoralities are practiced or promoted by other Catholics.

You can read the Pope’s entire discourse, in its official English translation, here. 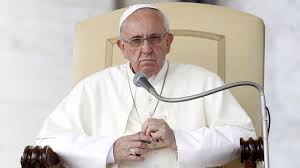 It is often said that true humility consists in depicting oneself sincerely; but true humility, in the Catholic sense, is much more than that. It consists in taking and tending to the place where God has willed one to be.  As a baptized Christian, a  Catholic is obliged by true humility to unswerving faith, hope and charity for God above and beyond all else, and to love his neighbor as himself.  False humility, however, puts on the display of self-effacement, but in fact refuses to remain in the place which God has willed for it.

Take for example the teaching of the Apostle St Paul in 1 Cor. 11:26-27.  Therein, the Apostle of the Nations condemns those who approach to receive the Most Blessed Sacrament of the Altar without first examining themselves as to whether they are in the state of mortal sin or not: those who are, are not to receive because otherwise they commit another mortal sin, the one most horribly punished, that of sacrilege.

Now, a humble man who is Catholic accepts this teaching of St. Paul as well as all the others, especially that on true fraternal Charity, which was the subject of the Pope’s Discourse to the Cardinals this morning, which at the beginning, includes these words of the Pope:

All of us, myself first and each of you with me, would do well to let ourselves be guided by the inspired words of the apostle Paul, especially in the passage where he lists the marks of charity.

But it is the epitome of false humility, to cite the discourse of St. Paul on Charity, and work all the time to undermine the continued teaching and practice of refusing communion to adulterers and public sinners, as the Church has ever done for the last 2000 years, faithful as She is to this teaching of St. Paul.

That the pope is working to overturn this teaching of St. Paul has been loudly decried and openly manifested in the recent Extraordinary Synod for the Family, the secretary appointed to which, Cardinal Badlisseri, himself has confirmed that the Pope was behind every scandalous moment and document which it issued.  He even directed the Cardinal in the minutiae of the actions which the Cardinal made during the Synod, sending him, as is reported, frequent notes about what to do.

That’s false humility of a most outrageous kind, the heretical one.

Now lets consider the Pope’s discourse and show how he is reading St. Paul in a heretical light, that of his own personal faith, which is not the Catholic one:

When the Pope spoke about charity this morning, he began by explaining what he means (Boldfacing our own):

Saint Paul tells us that charity is, above all, “patient” and “kind”. The greater our responsibility in serving the Church, the more our hearts must expand according to the measure of the heart of Christ. “Patience” – “forbearance” – is in some sense synonymous with catholicity. It means being able to love without limits, but also to be faithful in particular situations and with practical gestures. It means loving what is great without neglecting what is small; loving the little things within the horizon of the great things, since “non coerceri a maximo, contineri tamen a minimo divinum est“. To know how to love through acts of kindness. “Kindness” – benevolence –means the firm and persevering intention to always will the good of others, even those unfriendly to us.

Here the Pope has radically mischaracterized what “catholicity” is about.  In its proper sense, “Catholic” is from the Greek, “catholicos”, which means ‘universal’.  As such, it is used as the proper adjective for the Church which Christ founded for the salvation of all peoples in all times.  It does not, in any sense of the word, mean “patient”.  In fact, there is much which is proper about our faith which has nothing to do with patience, but rather with impatience.

Contrariwise, it is evil to be patient when we should not be patient.  For example, it is evil to be patient in enduring the unjust persecution of others; in enduring the false presentation of facts, in tolerating the unjust deprivation of the human rights of others. That is evil, and evil which can come from many causes, such as sloth in the good, cowardice in the face of the difficult, malignity in the love of the suffering of others.

For these reasons, St. Paul couched his discourse on charity in the context of personal relationships in the local church, and did not intend what he wrote regarding matters which regard other issues.

But the Pope has taken St. Paul’s words out of context and uses them as a template under which “catholicity” itself is to be practiced.  This is no less a counterfeiting of the faith that the counterfeiting committed by the defrocked communist priest, Leonard Boff, the Brazilian theologian of whom Pope Francis has spoken so highly off.  In his infamous book on St. Francis, Boff attempted to depict the Saint as a Marxist all the while claiming that the values of Marxism were the authentic values of St. Francis.

For those of poor instruction, Boff’s book was a tool to transform the authentic catholic piety of the poor in Latin America into a zeal for supporting communist infiltration and takeovers throughout the continent.  And it succeeded for the most part, as history itself is the witness today.

For Pope Francis to attempt this as pope, does not surprise, therefore, because he is merely rehashing the method of Leonard Boff.  As anyone in the West can recognize, that the Communists and Socialists have always insisted on disarming their opposition by advocating to excess the virtue of the qualities of passivity and toleration and pacifism in the face of mortal threats. This attempt of the Pope is seen clearly when he said, this morning:

Charity, Saint Paul says, “is not irritable, it is not resentful”. Pastors close to their people have plenty of opportunities to be irritable, to feel anger. Perhaps we risk being all the more irritable in relationships with our confreres, since in effect we have less excuses. Even here, charity, and charity alone, frees us. It frees us from the risk of reacting impulsively, of saying or doing the wrong thing; above all it frees us from the mortal danger of pent-up anger, of that smouldering anger which makes us brood over wrongs we have received. No. This is unacceptable in a man of the Church. Even if a momentary outburst is forgivable, this is not the case with rancour. God save us from that!

It is simply stunning that Pope Francis should have the gall to read these words to the Cardinals, since he himself is notorious for his brutal verbal outbursts by which he terrorizes everyone who is not doing what his whims suggest.  I myself can indirectly testify to this, since in the Fall of 2013, I had the occasion to speak with a Bishop recently ordained by the Pope, and at my suggestion that for the sake of a small justice, he speak to the Pope about it, he began to shudder with great fear, saying, “You just cannot go into Santa Marta and request to speak with the Pope, he does not allow that!”

For more on our coverage of the agenda of the Pope, see our reports on the heretical spirit of “Team Bergoglio” and the schismatic intentions for which they are working.

If you want to see the fear on the faces of the Cardinals attending this weeks consistory, you need look no further that the video Report from Rome Reports.