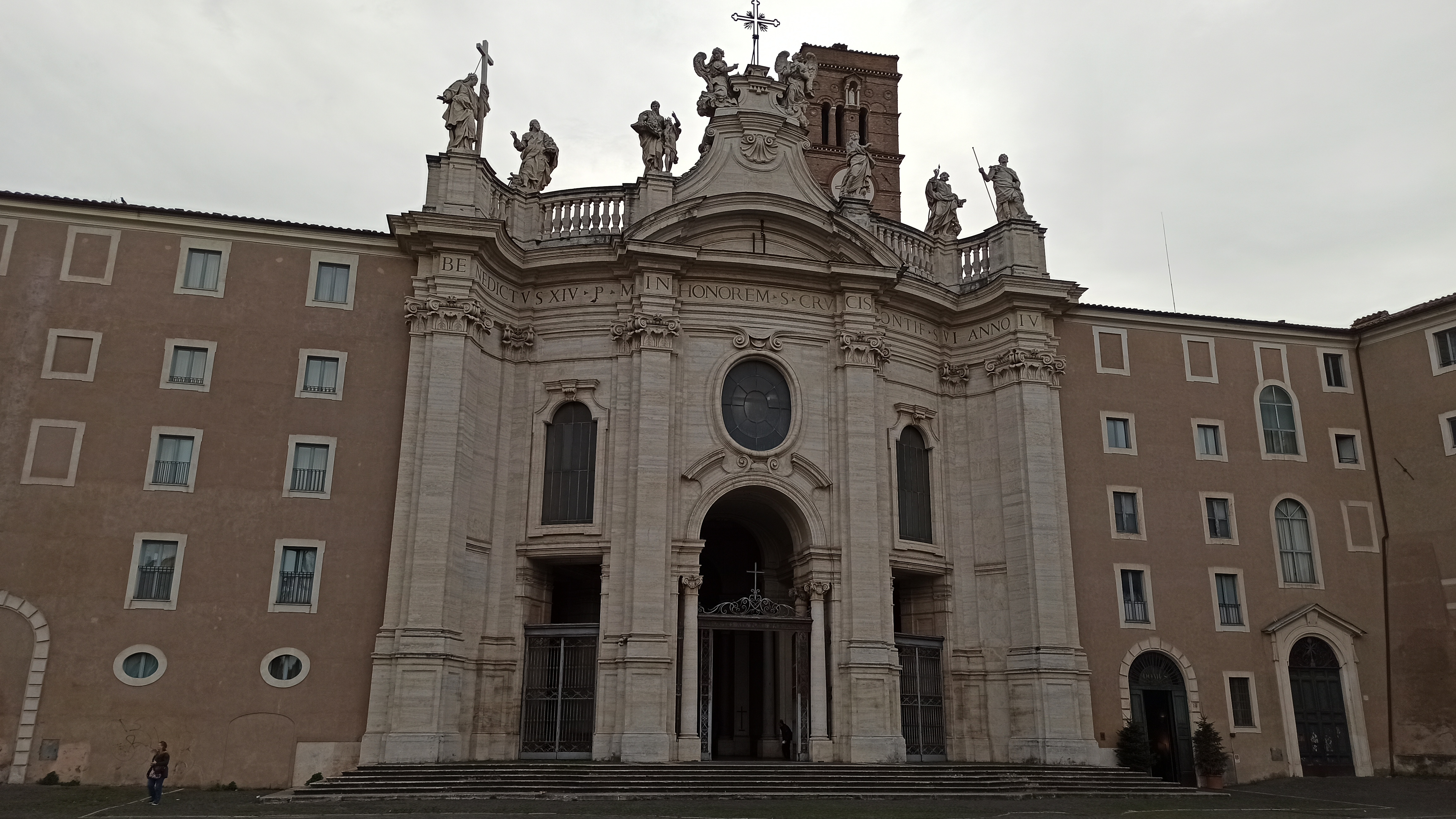 Every Catholic dreams of visiting Rome and making the pilgrimage to the 7 Patriarchal Basilicas, which are the object of the devotion of the faithful seeking the plenary indulgence for pilgrims to Rome. But not all of us have the opportunity or the means. For this reason, FromRome.Info publishes a series of virtual visits, so that Catholics everywhere can know something of these holy places and gather some grace by visiting them in spirit.

Today, I made a pilgrimage to the Basilica of Santa Croce in Gerusalemme, which contains the most holy relics of the Passion of the Lord. Here in video and image is what you would see, if you came alone with me, this morning at Rome.

Then as you enter, you see this amazing sight: 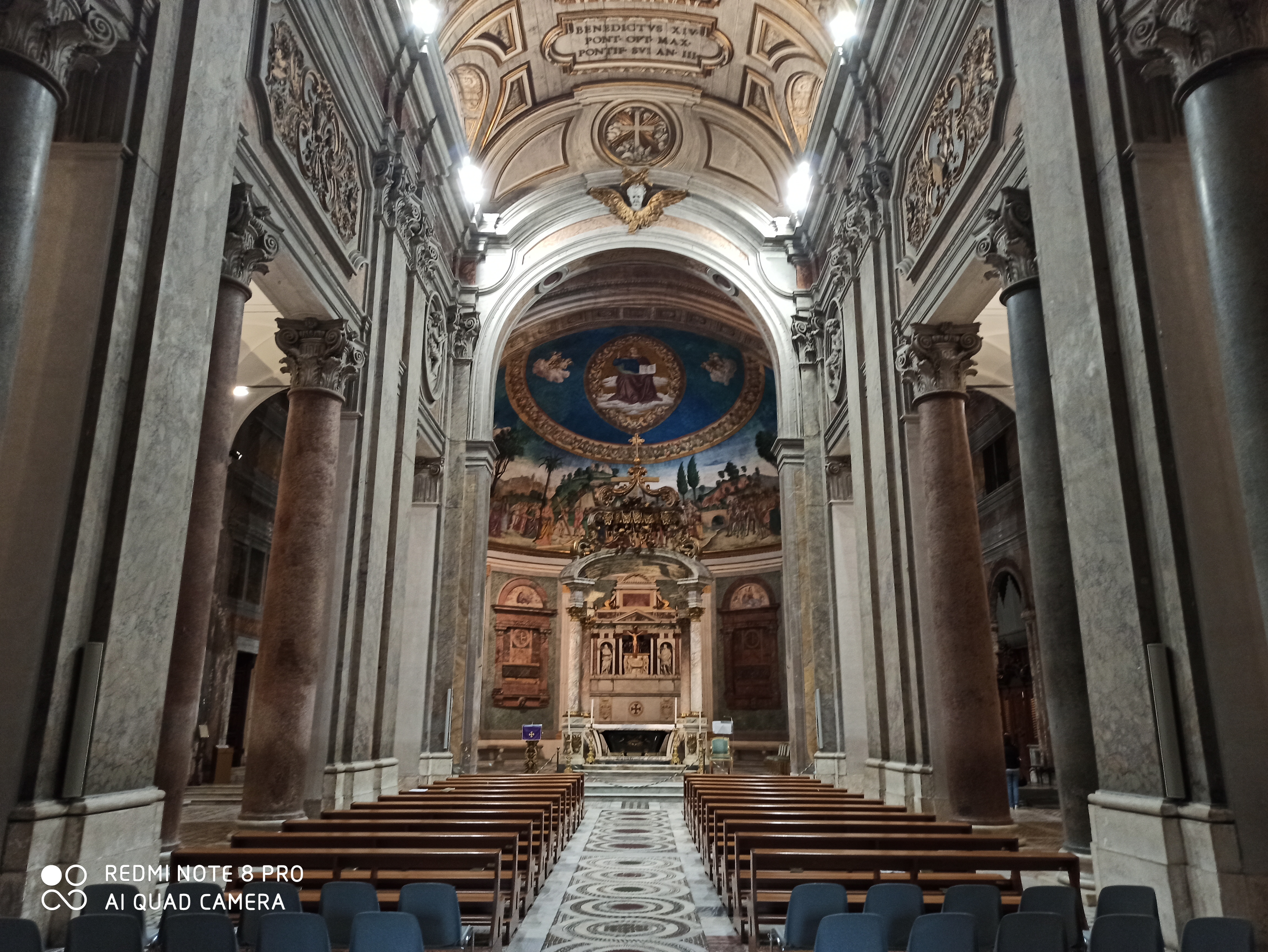 This is the view of the Nave of the Church from the front door. In front, and the end of the Nave is the Apse containing the High Altar and a magnificent Fresco of Christ the Teacher, revealed in the immensity of Heaven.

Everything about this Basilica is amazing. Look at the floor, covered with precious marble tiles in the mosaic style of the High Middle Ages, which imitated that of Constantinople: 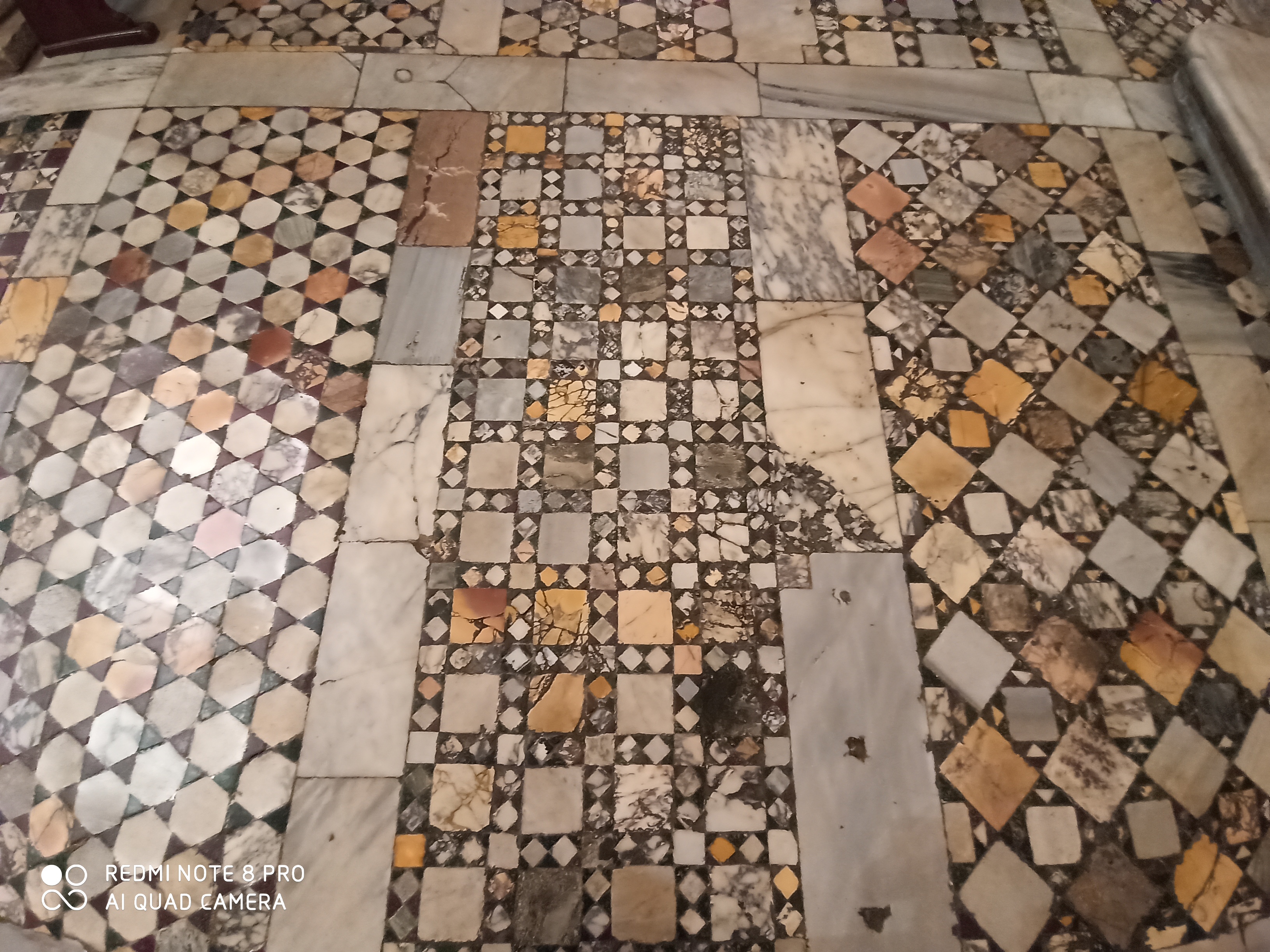 Then there are some magnificent side altars and devotional images. Here is some of them.  First, Our Lady of Grace: 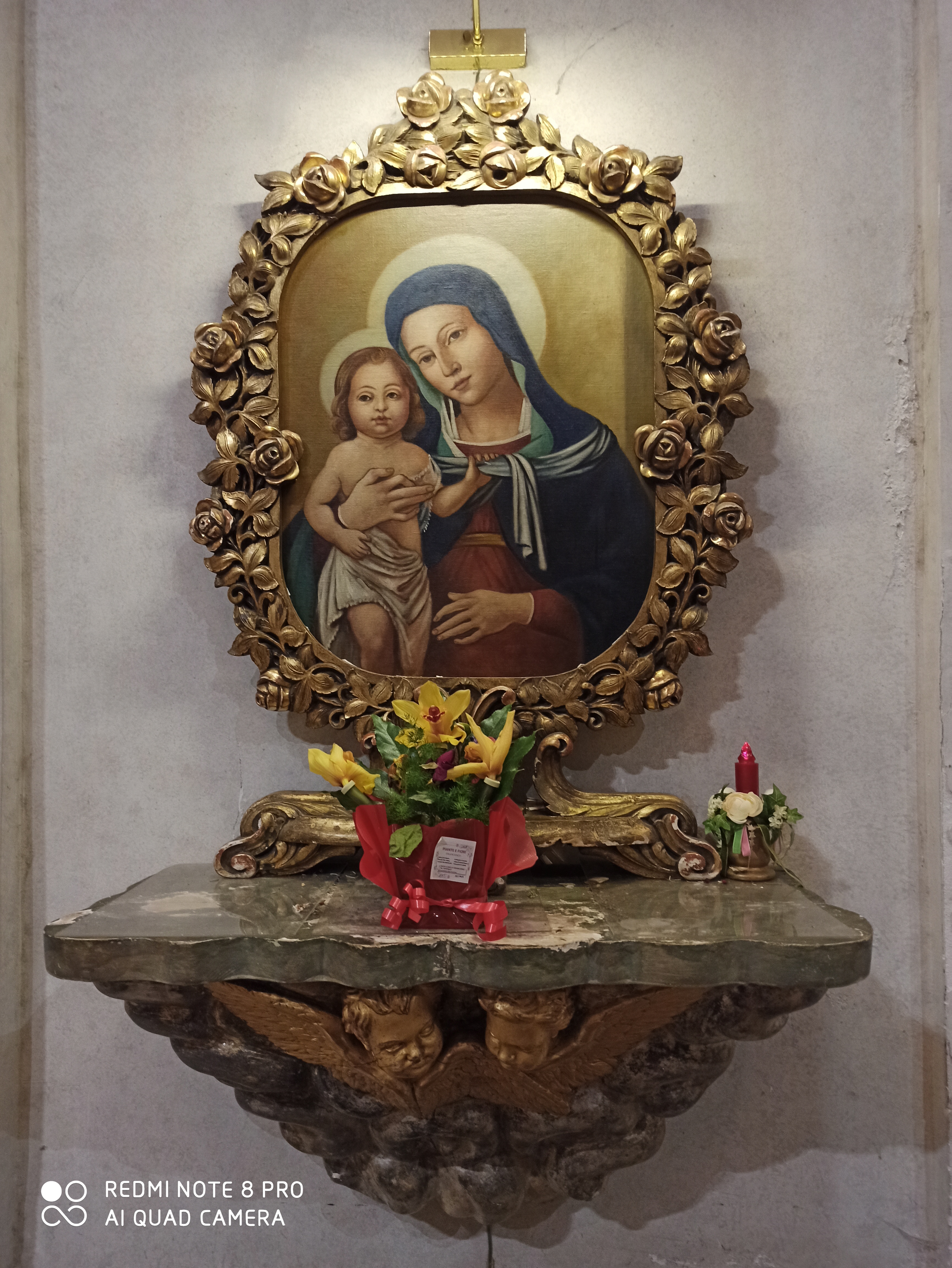 Then, a side altar dedicated to Saint Bruno, showing him miraculously remove a tooth from a Martyr’s skull, so as to obtain a relic for the devotion of the faithful. 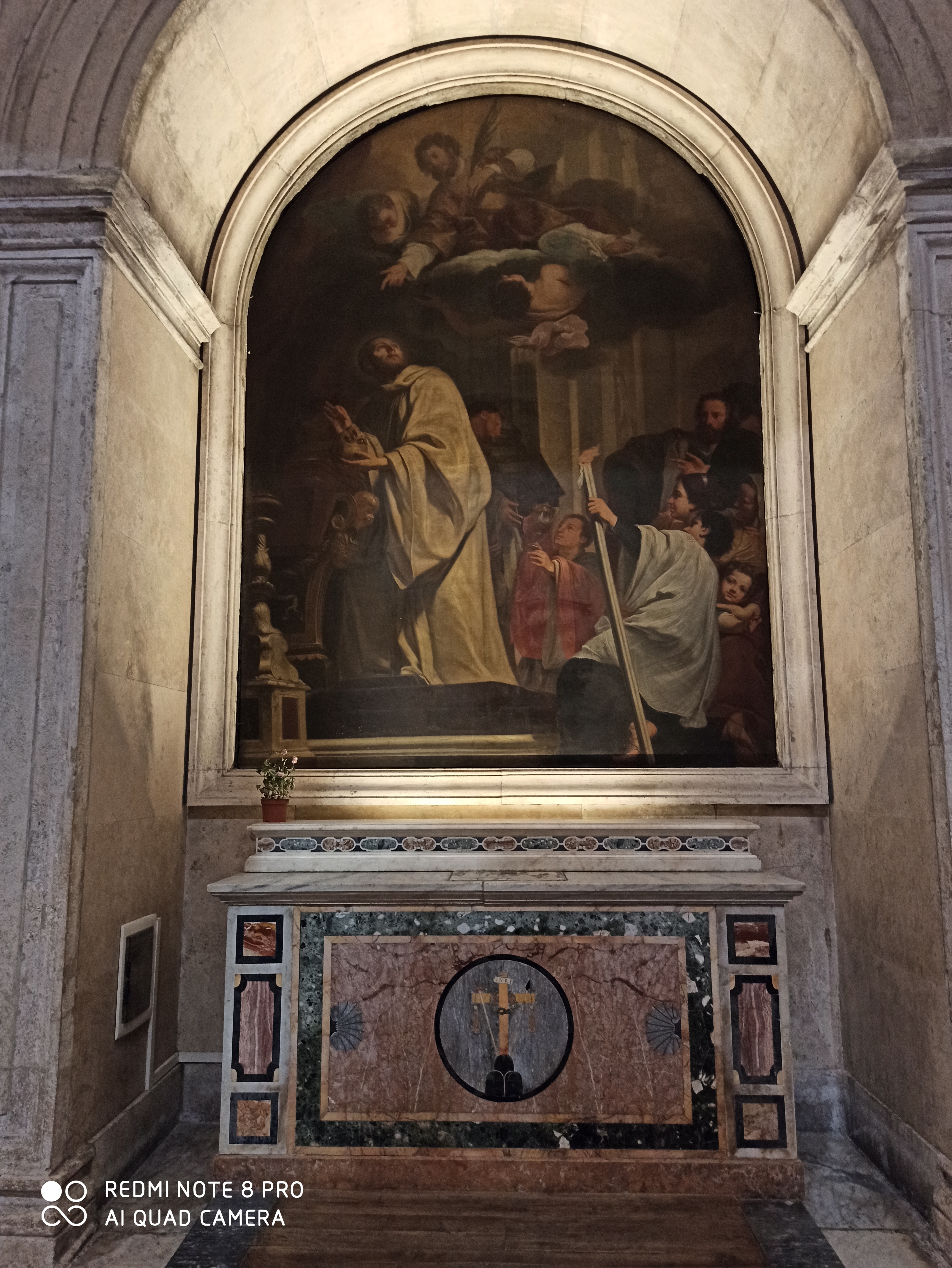 The acolyte to the right is vested in the style of the 16th century: that object in his hands is a double candle: here in Italy, on occasion they fuse two long candles together, side by side, to prevent each from breaking. Their use is customary in solemn processions. Saint Bruno to the left is weather the habit of the Eremitical Order which he founded: the Carthusians. He is depicted in this side altar, because at one time his Order had the care of the Basilica.

The Next is a side altar of Christ Crucified, with an ancient wooden carving of Our Lord upon His Cross: 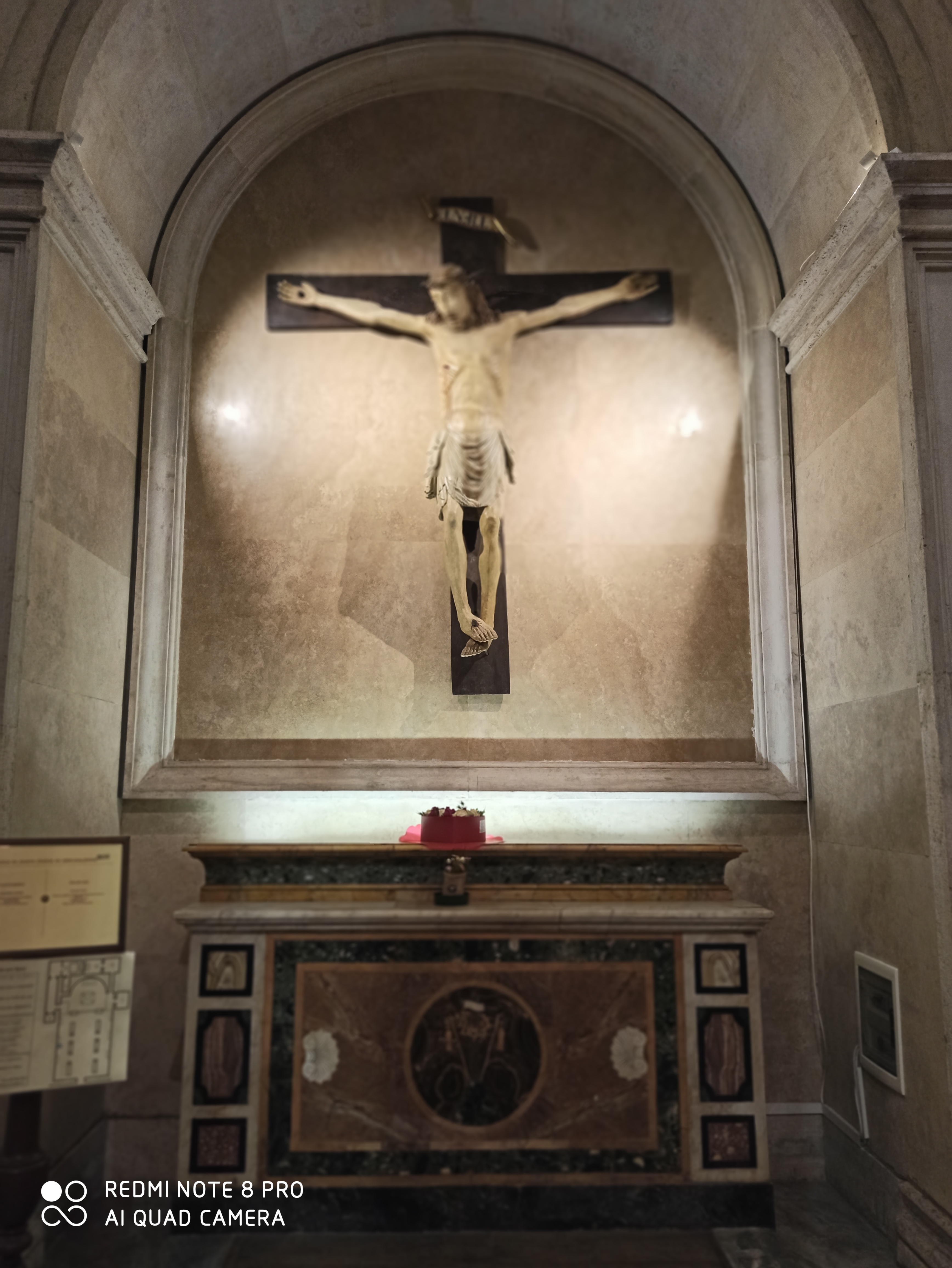 Here, now, is a short video showing the magnificent Sanctuary of the Basilica. In Italian, they call this the Presbiterio, because it is the place reserved for the clergy. At the center is the High Altar, covered above with an elegant Marble and Wood Canopy supported by four pillars. High above in the Apse, there is a quarter-dome with a splendid fresco in late Renaissance style depicting Saint Helena discovering the Holy Cross, venerating it, and carrying it off to Constantinople accompanied by troops of the Imperial Army of her son Constantine.

If you noticed, beneath the High Altar is a marble reliquary: it contains the relics of Saint Helena, and is based on a design found in the Roman Catacombs, at the altars of the Martyrs. This is the ancient reason why in the Latin Rite, relics of the Saints are placed inside or beneath high altars, so that the prayers of the Mass might be accompanied to Heaven by the prayers of the Saints whose relics are enshrined therein.

Here is a better photograph of the High Altar and Apse: 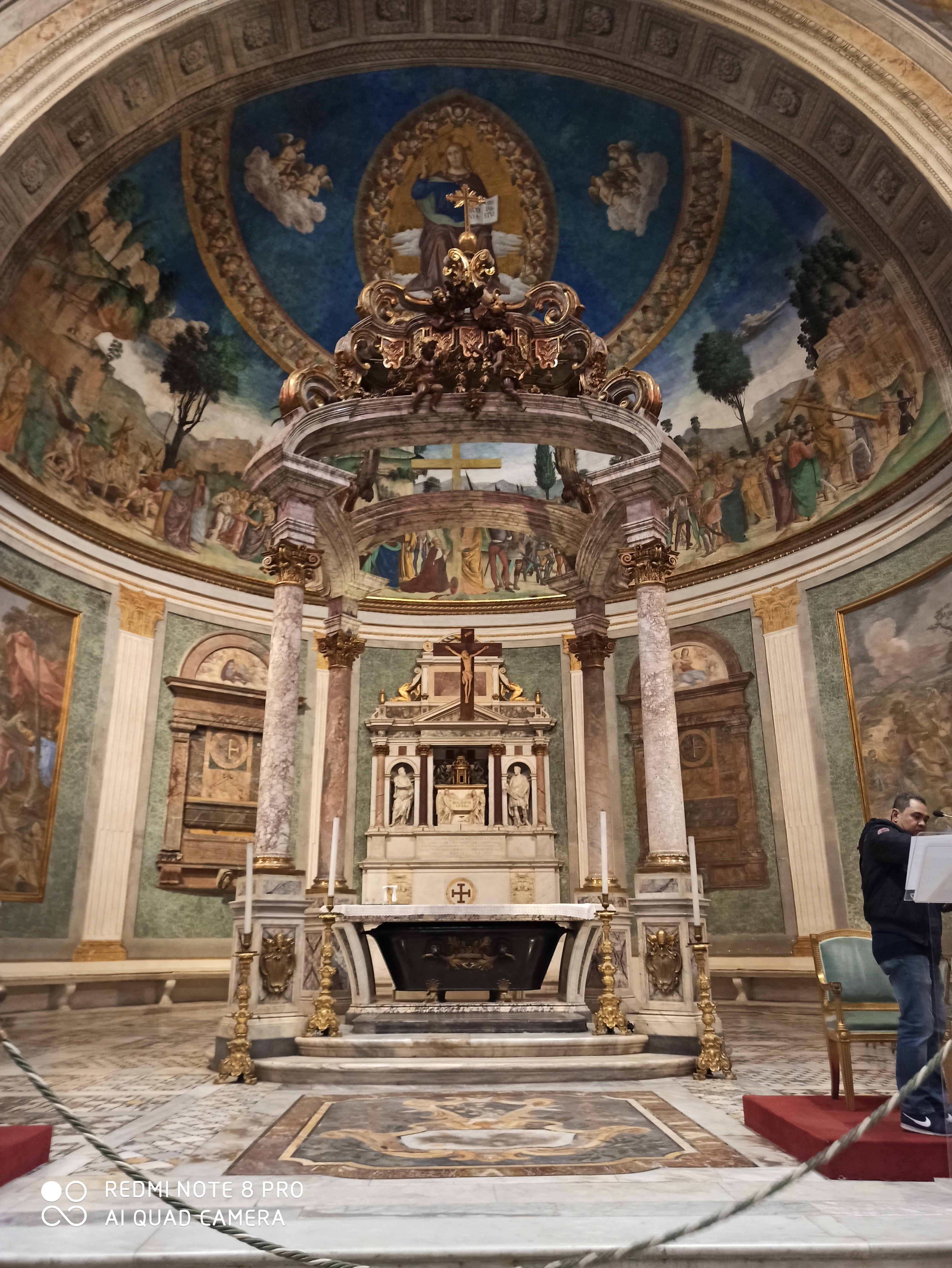 In the next video, which follows, I take you step by step to the Chapel of the Holy Cross, which is located behind the High Altar, but which is approached through a separate hallway, and I show you the wonderful Relics kept there.

The treasure of treasures and the goal of every pilgrim is to kneel before the Relics of our Salvation, and beg the Lord Who hung upon them to redeem us for every grace and blessing: 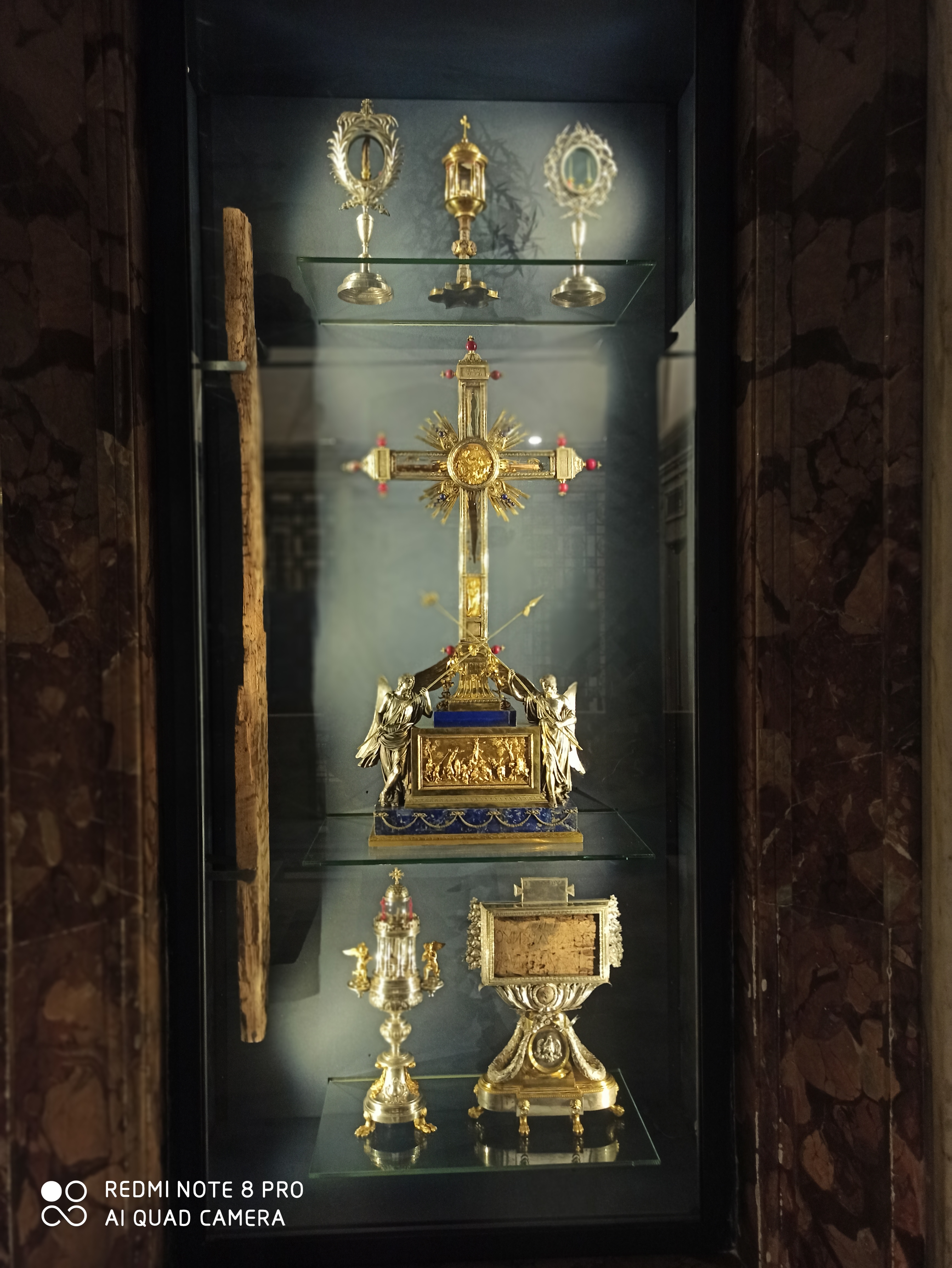 The 4 Major Relics of the Holy Cross are in the 4 arms of the Cross Shaped Reliquary at the center of the above photo. Beneath,  on the left, is a reliquary containing one of the Nails which held Our Lord to His Cross in his 3 Hour long Agony for our salvation. On the right,  next to it, is the reliquary of the Tabella, the piece of wood on which Pontius Pilate had etched in Greek, Latin and Hebrew:  Jesus Christ, King of the Jews!

In the reliquaries above, I am only certain of this, that the one on the right contains 2 thorns of the Crown of Thorns.