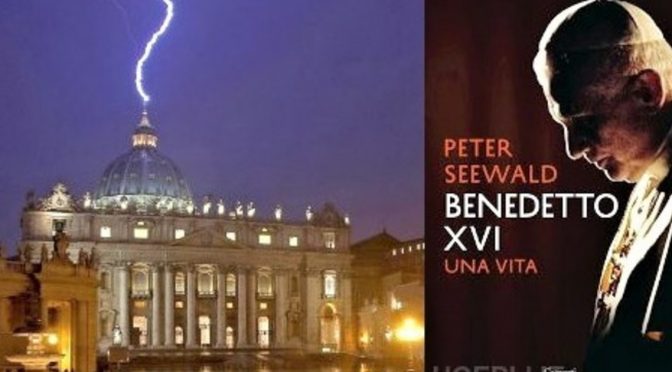 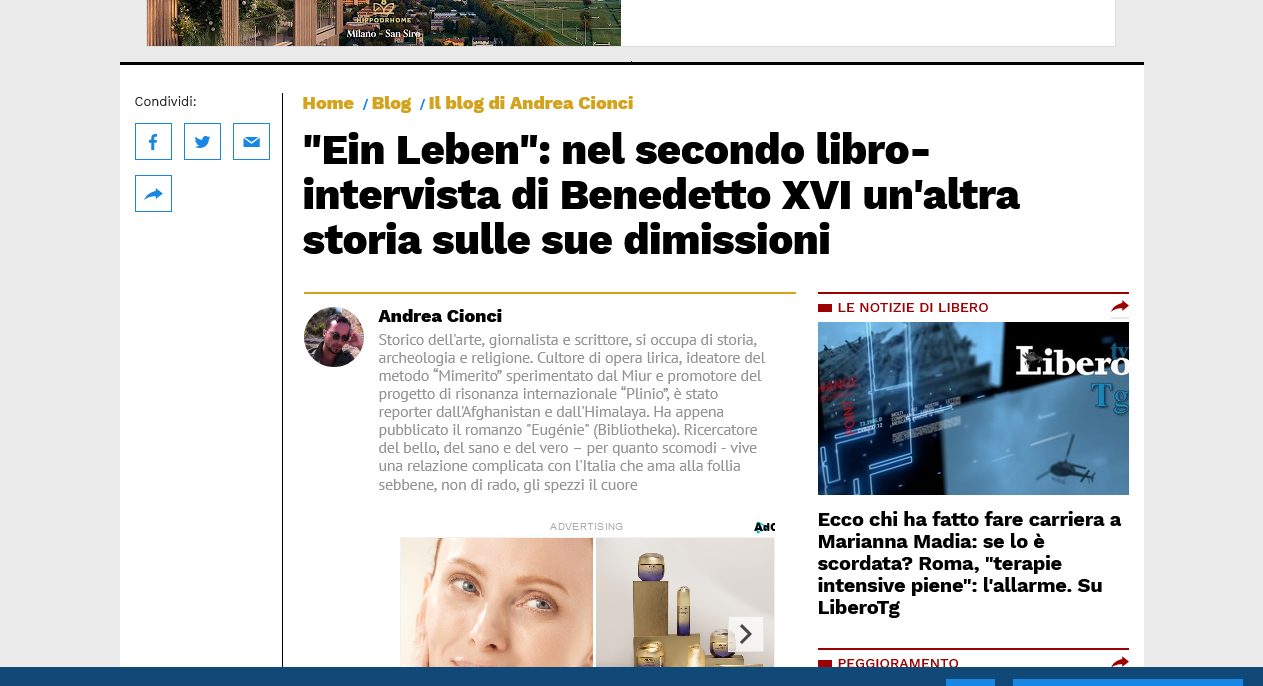 “Ein Leben”: In the second book of Interviews with Pope Benedict XVI, we find another story about His resignation

Here is an unofficial English translation

A few days ago, we became aware of strange inconsistencies and the possibility of a shocking subtext in the interview book by Peter Seewald – Benedict XVI “Last Conversations” (Garzanti 2016) HERE .

On a deeper reading, the writing seemed to be able to coincide with a scenario now outlined by various theologians, journalists, Latinists and legally explained by the recent volume ō Benedict XVI: pope emeritus? ö By the lawyer Estefania Acosta HERE .

According to this thesis, Benedict XVI, now besieged by the internal modernist frond and by external globalist powers, never left the Petrine throne in 2013 : he only announced his resignation from the exercise of his functions, moreover without ever ratifying them. HERE

In this way he would have allowed his enemies to seize power, effectively constituting an anti-papal party . Why all this? It would be a strategic retreat to allow anti-Christ forces to manifest themselves and then be canceled, thanks to the recognition of the only true pope, Benedict, for a redemption-purification of the Church. Over the past eight years, Ratzinger, kept under control by the antipapal power, has thus sent us continuous messages through a subtly logical language to facilitate our awareness.

The question, incredible as it may seem, is serious and there are even priests who are excommunicated for their fidelity to Pope Benedict. The latest is Don Enrico Bernasconi , whose interview we propose HERE .

So we also went to read the second book by Peter Seewald ” Ein Leben – Una vita” of 2020 (Garzanti), of which few and disorganized fragments filtered out in the press.

The voluminous biography contains eight pages with new questions to Ratzinger . Let’s try to read them according to the above perspective and see if the sense can spin.

First of all, Ratzinger declares: “My intention was not simply and primarily to clean up the small world of the Curia, but rather in the Church as a whole” . And then: ōThe real threat to the Church comes from the universal dictatorship of apparently humanistic contradicting ideologies, which entails exclusion from the basic consensus of society. [ģ] Modern society intends to formulate an anti-Christian creed : whoever challenges it is punished with social excommunication. Being afraid of this spiritual power of the Antichrist is all too natural ö .

And so far we would be there . Benedict immediately after, underlines the differences with one of his illustrious predecessors.

ō The visit (2009) to the tomb of Pope Celestine V was actually a chance event; in any case I was well aware of the fact that Celestine V’s situation was extremely peculiar and that therefore it could in no way be invoked as (my) precedent ö.

One could read this as meaning: “Celestine V legally resigned in 1294 because he did not feel like taking on the burden of the papacy, which I absolutely did not do, since I did not resign as pope, but I only declared that I wanted to renounce to the exercise of practical power, for the purposes we know. Celestino and I have nothing in common “.

Then the Holy Father continues:

“It was absolutely not my intention to take an extreme distance from the conditions in which the Church finds itself. If you study the history of the popes, you will soon realize that the Church has always been a net in which good fish and bad fish end up. The Catholic conception of the Church and of the managerial roles within it excludes the adoption of an ideal Church as a parameter and instead foresees that one is ready to live and work in a Church besieged by the forces of evil ö.

Or rather: “I have not in the least abandoned the role of pope. We know that the history of the Church is full of antipopes and we must be ready to face the siege of the forces of evil”.

Seewald then tackles the key question: according to Church historians there is no “emeritus” pope , since there cannot be two popes . It is true that, since the 1970s, a bishop can resign and become an emeritus, but this – he asks – also applies to the pope?

Ratzinger replies: ōIt is not clear why this juridical figure should not also be applied to the bishop of Rome. The formula manages to account for both aspects: on the one hand no concrete juridical mandate, on the other a spiritual charge that is maintained, even if invisible. Precisely the juridical and spiritual figure of the emeritus allows us to avoid even the idea of the coexistence of two popes, given that a bishopric can have only one holder “.

There is therefore only one pope. But when he says “the juridical and spiritual figure of the emeritus”, to which of the two does he refer, to the pope or to the bishop? The ambiguity does not seem accidental, but the Latinist FrÓ Alexis Bugnolo , an expert in canon law , explains :

ōIf we mean BISHOP EMERITUS , the argument is invalid from the canonical point of view because a bishop receives an ecclesiastical office and, since his mandate as ordinary bishop has been created by the Church, two persons can be allowed in the dignity of the bishop. If we mean pope emeritus, the argument is still invalid since there is no juridical figure of pope emeritus and since the munus is not shared iure divino (by Divine insitution)”.

Also for the theologian Carlo Maria Pace , who HERE analyzed the invalidity of Ratzinger’s resignations due to their deferral, confirms: “Benedict XVI erroneously stated that a Pope who resigns remains Pope in the same way that bishops who resign remain bishops “.

In essence, the pope emeritus would himself be THE pope. In fact, if A bishop resigning (from the post of human origin) can become A retired bishop, IL Pope, renouncing the ministerium is always THE Pope, although retired, since it keeps the munus which is given directly by God. That’s why Ratzinger continues to say for eight years that the pope is only one and never specify that it is Francis.

Benedict seems to reiterate the concept, a few lines later, with an example: “A father remains so until death (even if he passes the management of the company to his son) and the human and spiritual meaning of being a father is not revocable”.

But what would be the spiritual purpose of these fake resignations?

An explanation is offered by Seewald’s own question:

ōThe Italian philosopher Giorgio Agamben says he is convinced of the fact that the real reason for (Ratzinger’s) resignation was the desire to awaken the eschatological conscience (concerning the ultimate destinies of man). In the divine plan of salvation, the Church would also have the function of being together “the Church of Christ and the Church of the Antichrist” . The resignation would be a foreshadowing of the separation between “Babylon” and “Jerusalem” in the Church. Instead of engaging in the logic of maintaining power, by her resignation from office she would have emphasized his spiritual authority, thereby contributing to its strengthening .”

And here is Pope Benedict’s response:

“St. Augustine said that on the one hand many are part of the Church only in an apparent way, while in reality they live against it, and that, on the contrary, outside the Church there are many who – without knowing it – deeply belong to the Lord and therefore also to his body, the Church. We must always be aware of this mysterious overlap of internal and external, an overlap that the Lord has exposed in several parables. We know that in history there are moments in which the victory of God over the forces of evil is visible in a comforting way and moments in which, instead, the forces of evil obscure everything ö.

Let’s say, in conclusion, he doesn’t seem to have exactly denied Agamben’s opinion.

We use cookies on our website to give you the most relevant experience by remembering your preferences and repeat visits. By clicking ŌĆ£Accept AllŌĆØ, you consent to the use of ALL the cookies. However, you may visit "Cookie Settings" to provide a controlled consent.
Cookie SettingsAccept All
Manage consent