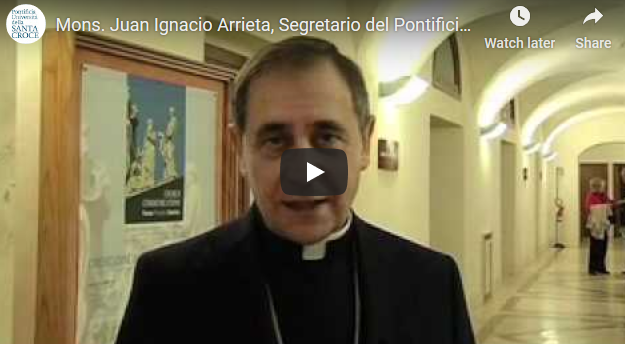 I write this post to publicly thank Mons. Juan Ignacio Arrieta Ochoa de Chinchetru, Titular Bishop of Civitate, who was appointed by His Holiness Pope Benedict XVI as Secretary of the Pontifical Council for the Interpretation of Legislative Texts.

I met with him this morning at 9:45. The meeting lasted about 75 minutes. I did not record the meeting, but want to share with everyone what I remember of it, because of its great importance to the life of the Catholic Church.

I began by saying that I had come to discuss the interpretation of law (interpretatio iuris) or more specifically the right to interpret canonical acts (ius interpretandi). Bishop Arrieta is an expert on this matter, having served in the capacity of a Professor of Canon Law since 1984 at the Pontifical University of Santa Croce, and from 2003 to 2008 at the Preside of the “St Pius X” Institute of Canon Law at Venice, and as Canonist to the Apostolic Penitentiary. Since February of 2007, he has served in the Pontifical Council as its Secretary. This title does not mean he is a secretary, but rather, the Vice President as it were to the Council.

I want to remark on the gentleness and noble demeanor of the Bishop, who never used any hominems, never lost his patience and showed himself willing to discuss the most impolitic issues, from the point of view of canon law, in the Church.

I began my questions with a preface, and with the Bishop’s permission read to him my entire article, entitled, ¡Viva Guadalajara! which was published, here, at the From Rome Blog, this morning.

During the reading, the Bishop could not hide his amusement at the fictitious story, but as I moved to my comments on how this story applies not only to the first moments of a papacy but also to the last, that is, to a Papal renunciation, the amusement on his face disappeared instantly. — Nevertheless, he continued to be polite.

He confirmed for me the following facts:

He also confirmed for me these points of law:

Now Bishop Arrieta did not agree with me in everything. He made it clear to me that he holds the following positions:

Regarding this 4th position of the Bishop, I must say I tried to get a word in edgewise to object to such a patently false statement, as if conditions for validity for an act of renunciation of munus only regard the act of renouncing and not the object which is to be renounced. I think the Bishop just said this out of desperation because it is logically absurd on the face of it, as you cannot read part of a sentence which regards conditions for validity and ignore what was said as the fundamental condition for the occurrence or discernment of the occurrence of the act in question!

Regarding the 5th position, I disagree, because Pope John Paul II, the Vicar of Christ, by promulgating the Code imposed upon the whole Church the canonical obligation of understanding it in accord with Canon 17, not as defective in anything. Therefore, an interpretation of canon 332 §2 which implies a defect, cannot be authentic.

I won’t respond here to n. 6, since I have devastatingly refuted it in the recent Academic Conference at Rome, the excerpt of which I published on this very topic, here.

What left me unsatisfied about our conversation is that I asked a lot of questions, but Mons. Arrieta could not give me answers. Here are some of my question, not verbatim, but according to their sense, that the Bishop did not or could not answer:

The Bishop closed by remarking that my approach to the reading of the Act of Renunciation was strange to him, that he has never considered this problem before, that he has never read about this controversy, but that I had given him “much to think about”.

The sum of what Mons. Arrieta told me leads me to conclude the following:

Finally, I do want to thank the Bishop for his patience. Several times in the 75 minutes we spent discussing this most important matter, he remarked he had other duties, but stayed anyhow when what I said was substantial and presented a line of argumentation which he felt necessary to respond to.

* For those not familiar with the technical language, in this controversy, “papacy” here refers not to the Vatican, nor to the Papal State(s) or Territory,  nor to the government of the Vatican, but to the Office of the Roman Pontiff. And I use this term here in the linguistic sense, not in the sense of the thing, but of the thing as named. For example, a husband refers to his wife by either one of her proper names, first, middle, last, or improper names, such as honey, dear, sweetie, or by a pronoun standing alone or followed by a subordinate phrase, such as, “the one who does the dishes”. If he says, I am going to get rid of the dish-washing, the bathroom-cleaning, the meal-preparation and the warm bed, he has not referred logically nor verbally to his wife, because the actions which his wife does or the effects of which she is the cause are not her, they are effects or actions under her power, and by naming them, one does not name necessarily or determinatively the one who is his wife. — So likewise, when Pope Benedict renounced the ministry but not the Papal Office, he did not renounce the Office, because he did not name it, he only referred to that which might be construed as the ministry which flows from it. The intellectual incapacity or inability to recognize this common law of human language and signification is at the heart of the reason why so many think Benedict resigned the papacy, when in reality he did nothing of the kind. However, why he did what he did, is besides the point (praeter rem), because whatever his motives, the act remains invalid, null.