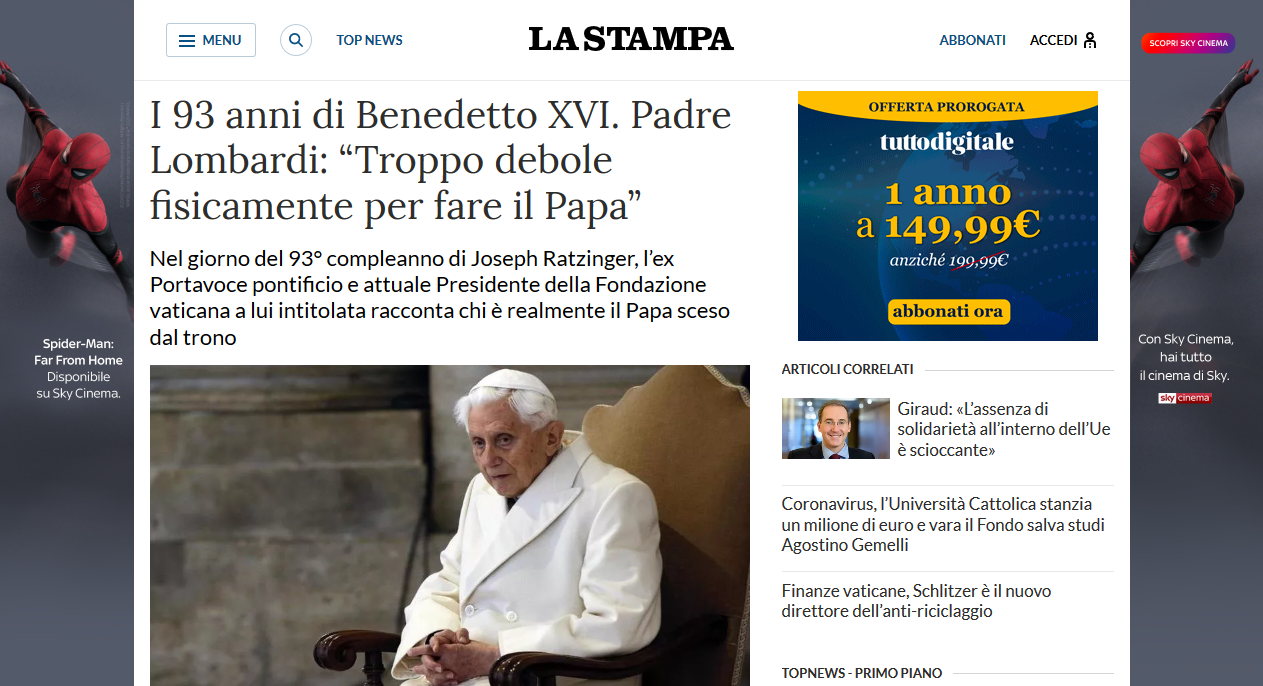 Father Lombardi, who was the spokesman for Pope Benedict XVI in February of 2013, is shaking in his boots. You can see this in the fact that, after 7 years he is still trying to control the narrative about what happened in that fateful month.

He did so in an interview with La Stampa, a leading daily newspaper, yesterday on the 93rd Birthday of His Holiness, Pope Benedict XVI.

Here is a brief list of the lies, Father Lombardi repeatedly uttered during the interview:

And you can see what Pope Benedict XVI thinks of La Stampa by refusing an interview on the occasion of his birthday. — Perhaps that has something to do with the fact that the newspaper has Batman, the gay icon, flying all over their pages? — When a newspaper has to dig up someone from 7 years ago to pretend to say something informed today about what is going on in the Vatican, you know that they have found a lot of doors shut in their face. And that is significant, but not surprising, on account of the questions that remain and are being asked.

But here is the really juicy part of the interview (my English translation), in the sense of the narrative that Lombardi is urgent to propose for credence, but which has lost all credibility:

From what was born this clamorous renunciation of the papacy?

From a responsible liberty which knows how to look at one’s own duties and to one’s own responsibility before God and the Church. That of the renunciation was an act characteristic of his own conscience.  He always showed himself to be fully aware of a vocation received from God and exercised in the call to serve others. It was a gesture totally alien to constrictions.

There is talk of external conditioning…

I have always held as unfounded and unjustified the attempts to interpret the renunciation of Benedict XVI as the consequence of pressures, discomfort or disappointment.  Significantly, the renunciation of the Pope to be valid must have one characteristic: it must be free.  And the decision of Joseph Ratzinger is attributed exclusively to his capacity to see with great clarity and a profound sense of responsibility the growing disproportion between his own strength and the duties implied by the task of the Pontiff.  A choice for liberty and responsibility of which he has never repented

If rather what Lombardi said were true, why would he feel the need to constantly repeat himself? Especially, why are you so insistent to repeat the word “responsible” or “responsibility” so many times?

It sounds as if, psychologically, Lombardi is shouting: IT’S NOT MY FAULT! I HAD NOTHING TO DO WITH IT!

Perhaps he is being repetitious, because, since it is not true, Father Lombardi, is destined to go to a very dark, dark place, for having been instrumental in robbing the loyalty of 1 Billion Catholics from the true Pope, by giving Giovanna Chirri the go-ahead to tell the world a big, fat lie.

As I have demonstrated in my recent documentary, where I speak expressly about Father Lombardi’s key role in deceiving the world on Feb. 11, 2013 (see Episode 5).

And you can see what La Stampa and Father Lombardi are really worried about in the title of the article: I 93 anni di Benedetto XVI. Padre Lombardi: “Troppo debole fisicamente per fare il Papa”.  Which in English means:  The 93 years of Benedict XVI. Father Lombardi: “Too weak physically to act as the Pope”.

Notice they still call him by his Papal name? So they recognize that he still holds the papal dignity, which is impossible if he renounced the petrine munus, as Lombardi is attempting to say. Also, the phrase attributed to Father Lombardi (“Too weak physically to act as the Pope”) is not in the past tense, it is in an infinitive construction, applicable to past and present. But why attempt to deny he is took weak to be “the Pope” today, unless you fear his return as the one true Pope?

That says it all. This interview is an excellent piece of misinformation, disinformation and narrative control. It’s sole purpose is to deceive.

But it also reveals great fear on the part of La Stampa, Lombardi and the Vatican authorities which permitted it. A fear directed entirely against the truth of what really happened and the growing awareness of that truth by the faithful.

And some news agencies are aware of that, like the Premium Times and the Daily Post of Nigeria, which have Gänswein say in English, that Pope Benedict is under “house arrest”, as if to tease their readership.

CREDITS: The Featured Image above is a screen shot of the page of La Stampa, online, from whence the citation of the interview was taken, and is used here in accord with fair use standards for editorial commentary.