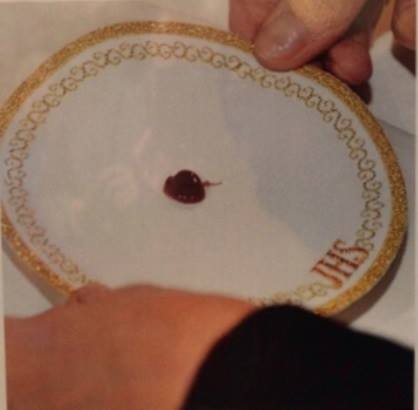 Rome, April 13, 2016:  Our Most High Lord Jesus Christ, who in His Great and Authentic Mercy keeps His promise to us, His Faithful, on a daily basis:  Lo, I am with you all days until the consummation of the age, Mt 28:20, has worked another Eucharistic Miracle to confound the heretical proposals of Cardinal Kasper and Team Bergoglio.

NOTE WELL:  This Miracle, which proves the promise of Our Lord in Matthew, chapter 28, 20, is to remind us of what Our Lord said in the same passage, regarding remaining faithful to Him!

16 And the eleven disciples went into Galilee, unto the mountain where Jesus had appointed them. 17 And seeing them they adored: but some doubted. 18 And Jesus coming, spoke to them, saying: All power is given to me in heaven and in earth. 19 Going therefore, teach ye all nations; baptizing them in the name of the Father, and of the Son, and of the Holy Ghost. 20 Teaching them to observe all things whatsoever I have commanded you: and behold I am with you all days, even to the consummation of the world.

Eucharistic Miracles also reveal that the Price or Cost to merit the Eucharist for us, WAS THE MOST BLOODY AND TERRIBLE SUFFERING OF OUR LORD IN HIS SACRED PASSION, a suffering which HE HAD TO UNDERGO out of Divine Justice on account of the Mortal Sins of mankind. For even if only 1 of us had committed 1 mortal sin, Our Lord in justice would have had to suffer the Passion and die, to make atonement for it!  Thus, how horrible it is, when a Pope de facto authorizes the concession of Communion to those in mortal sin to the scandal of the whole world.  Note that this miracle took place just before Pope Francis allowed Cardinal Kasper, in a Consistory of Cardinals, to propose his vile heresy, that claims the Eucharist can be  given to those living in adultery.

This miracle was approved by Msgr. Zbigniew Kiernikowski, the Catholic Bishop of Legnica, Poland, just days after the abomination of Amoris Laetitia was released upon the Church.

Here are the facts, according to Paula Luckhurst:  On the 25th of December, 2013, in the Diocese of Legnica a Host fell on the floor. It was put in a container with water to dissolve but after some time it turned red.

The then Bishop of Legnica appointed a Commission to study the phenomenon. In February 2014, the Host which remained was a singled fragment and was deposited on a corporal. The Commission ordered the taking of samples and conduct tests by different authorities.

The Department of Forensic Medicine stated that “the histopathological tissue fragments were found containing fragmented part of the skeletal muscle. (…) The whole image (…) is the most similar to the heart muscle “(…) with the changes that “often are accompanied by the agony ” of death. Genetic studies indicate that the human origin of the tissue.

The matter was presented to the Congregation for the Doctrine of the Faith for review.

A message from the Bishop of Legnica on this matter was issued two days ago and will be read in the fourth Sunday of Easter, 17 April 2016 in all the Churches of the Diocese.

Here is another report about the Miracle, which is a rough translation by a non-native speaker of Polish, but which we report verbatim.  St. Jack’s Church is according to a commentatory below, better translated at St. Hyacinth’s Church, named after a famous Polish Dominican (O.P.):

On 11 April 2016 the Bishop of Legnica Zbigniew Kiernikowski announced the signs of the Eucharistic miracle that happened at the St. Jack Parish in Legnica during the Holy Communion on 25 December 2013 when a consecrated Host fell to the floor, was picked up and placed in a water-filled container (vasculum).

Soon after, stains of red colour appeared and former Legnica bishop Cichy set up a commission to observe the phenomenon. In February 2014, a tiny red fragment of the Host was seperated and put on a corporal. The Commission ordered to take samples in order to conduct a thorough tests by the relevant research institutes. the Department of Forensic Medicine in Szczecin conducted research and announced that in the histopathological image, the fragments of tissue have been found containing the fragmented parts of the cross striated muscle, which is most similar to the heart muscle with alterations that often appear during the agony.

The genetic researches indicate the human origin of the tissue. The Congregation for the Doctrine of the Faith in the Vatican advised to expose the host for faithful. The host in a special monstrance will be exposed to public in early June in the St. Jack Parish in Legnica