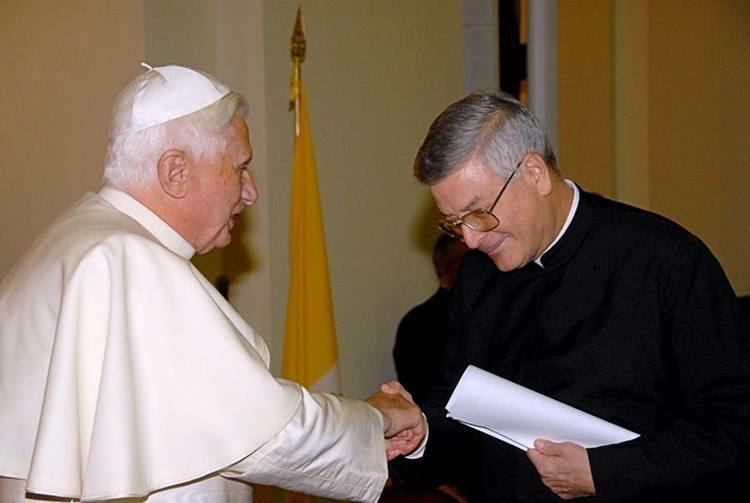 There has been an ongoing debate as to whether a man who is the pope loses his office immediately after having taken a pertinacious and manifest position which is heretical.

Most of this debate regards citing authors in previous ages or decades, against the opinion of Bishop Athanasius Schneider and others, like Steve Skojec, who hold that he needs to be judged and/or that no one can judge him.

Here, however, is the opinion of Father Gianfranco Ghirlanda, S. J., former rector of the Pontifical Gregorian University at Rome. Father Ghirlanda is one of the most highly respected Doctors of Canon Law in the City of Rome, if not in the Catholic Church. He still teaches at the Gregorian. Considering the opinions just given by Cardinal Burke which impinge on this controversy, I think it’s apropos to cite Father Ghirlanda’s position, not made in reference to the Cardinal’s comments, but from March 3, 2013, no less, in Civiltà Catiolica, the leading Jesuit publication in Italy:

The original Italian can be found here.  Here is that text quoted in part, on this subject:

This is my English translation, bold face added:

Now, if the Roman Pontiff does not express that which is contained in the Church, he would no longer be in communion with the whole Church, and hence neither with the other Bishops, who are successors of the Apostles. The communion of the Roman Pontiff with the Church and with the Bishops, according to Vatican 1 (cf. footnote 3 below), cannot be manufactured out of the consent of the Church and Bishops, inasmuch as it would no longer be a full and supreme power freely exercised (cf. canon 331; cf. the Nota Previa to Lumen Gentium, 4.). Thus, the criterion is the safeguarding of the ecclesial communion itself. There, where this might no longer be the case on the part of the Pope, he would no longer have any power, because he would fall by the law itself (ipso iure) from his primatial office.  This is the case, admitted in doctrine, for notorious apostasy, heresy and schism, in which the Roman Pontiff might fall, but as a “private teacher”, which does not require the assent of the faithful, because through faith in the personal infallibility which the Roman Pontiff has in the exercise of his office, and hence, in the assistance of the Holy Spirit, we are obliged to say that he cannot make heretical affirmations while willing to impose his primatial authority, because, if he were to do such a thing, he would fall ipso iure from his office.  Nevertheless, in such cases, since “the first see is not judged by anyone” (canon 1404), no one could depose the Roman Pontiff, but there could only be a declaration of the fact, which would have to be on the part of the Cardinals, at least of those present at Rome.  Such an eventuality, however, though foreseen in doctrine, is considered to be entirely improbable through the intervention of Divine Providence on behalf of the Church (see footnote 4).

When Father Ghirlanda says a heretic, who is pope, would fall ipso iure from the office – that is, would by that very fact immediately lose the office of the papacy — I believe he is speaking of Canon 1364 which imposes itself the penalty of excommunication for all apostates, heretics and schismatics, without limitation to what office they hold. But he might also be referring to the Divine Law, since as Scripture clearly teaches, no one who calls God a liar is in communion with His Son (cf. 1 John 1:5-6, for example). This not only applies to all popes, but to all Bishops and priests who hold ecclesiastical offices in the Church, that is any munus, as canon 145 §1 specifies.

What is noteworthy about the article in Civiltà Cattolica is that Father Ghirlanda is not writing an article on controversial points, he is merely reciting the received tradition, prior to the Conclave of 2013 regarding the loss of the papal office. His main thesis does NOT regard heresy in a man who is pope, but in what way a man who is pope holds or is united to the papal office, because he took the position that it is impossible for a man who was pope, but renounced the office, to be called “Pope emeritus” and that this title should NOT be accorded to Ratzinger. — He does not consider, however, the implications of the title, namely, as many have since opined, that its conferral signifies an incomplete or invalid renunciation.

Finally, I agree with Father Ghirlanda, that it is more probable the Divine Providence will prevent the final or ultimate defection of a pope (because Christ promised His prayer for Simon that his faith not fail). I would go so far to say that it is de fide, because of Scriptural support. But what exactly is that Divine Protection preventing? The event, the deviation, the pertinacity, the formal defection, the ultimate defection? All of these, step by step, with more grace the more the one who is pope deviates? That does not seem to be clearly explained by anyone, so far. But it would make a very interesting Doctoral thesis in the theology of Providence and Grace.

Contrariwise, if Christ’s prayer prevents a true Pope from final defection, then the final defection of a man whom one thinks is the pope would be an infallible sign that his canonical claim to the office was vitiated by some substantial error. This is substantially the argument of His Excellency the Most Rev. Rene Henry Gracida, Bishop emeritus of Corpus Christi, USA.