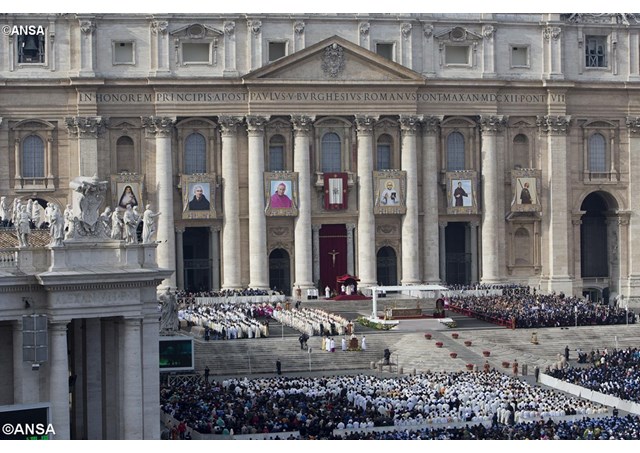 In the liturgical changes imposed by Pope Paul VI, today, Nov. 23, 2014, is the Solemnity of Christ the King.  Pope Francis gave a homily today, on the occasion of Canonizing 6 saints.  The official English text is found at Vatican Radio. In it, Pope Francis says (in the sixth paragraph):

The starting point of salvation is not the confession of the sovereignty of Christ, but rather the imitation of Jesus’ works of mercy through which he brought about his kingdom.  The one who accomplishes these works shows that he has welcomed Christ’s sovereignty, because he has opened his heart to God’s charity.  In the twilight of life we will be judged on our love for, closeness to and tenderness towards our brothers and sisters.  Upon this will depend our entry into, or exclusion from, the kingdom of God: our belonging to the one side or the other.  Through his victory, Jesus has opened to us his kingdom.  But it is for us to enter into it, beginning with our life now, by being close in concrete ways to our brothers and sisters who ask for bread, clothing, acceptance, solidarity.  If we truly love them, we will be willing to share with them what is most precious to us, Jesus himself and his Gospel.

Heresy, one must remember, is a post-baptismal denial of a truth revealed by God.  Truths can be revealed by God by explicit affirmations in any text of Scripture, or in implicit ones; since, God speaks in Scripture in a variety of ways.

One of the truths of Scripture is that Faith begins by hearing, proceeds by confession on the lips and lives in good works for the needy.  St. Paul, for example says (in his Letter to the Romans, 10:9):

This truth is implicitly taught in the Gospel of St. Luke, when at the Annunciation by the Archangel Gabriel, Our Blessed Mother first believed, then went in haste to her cousin St. Elizabeth; because first She confessed Her assent & consent to the truths revealed by God through St. Gabriel, then She manifested Her consent to the message of salvation in going to St. Elizabeth.

And St. Thomas Aquinas says, in regard to the Question (Summa, II, II, 5, 3), whether one is a heretic who disbelieves 1 article of the faith:

I answer that, Neither living nor lifeless faith remains in a heretic who disbelieves one article of faith.

Hence, we can say with absolute certainty, that what Pope Francis said, namely:

The starting point of salvation is not the confession of the sovereignty of Christ, but rather the imitation of Jesus’ works of mercy through which he brought about his kingdom.

Is heretical, because, this proposition denies the salvific merit which accrues from every confession of Christ’s sovereignty. In doing this, it denies that man’s justification begins with Faith, confessed either in mind alone or also on the lips.

This is the direct teaching of St. Paul, the infallible teacher of the nations.  Let us take a look at Romans 10:9 again:

In the Greek* we have for “the Lord Jesus”, kurion Ihsoun, a double accusative singular, which signifies not only “the Lord Jesus”, but “Jesus as Lord”.  But to recognize that Jesus is Lord, is to recognize his Sovereignty.   And thus St. Paul links the confession of Christ’s Sovereignty to salvation.  Thus, to explicitly deny that salvation begins with such a confession, directly denies the teaching of St. Paul.  But to deny the truth affirmed in any passage of Sacred Scripture is heretical, the very definition of heresy, for one separates himself from a truth revealed by God, through St. Paul.

Thus, to the homily which Pope Francis uttered today, we must respond:  No, Francis, what you just said is heresy!

But, as St. Thomas says, at the end of the above, quote, merely to say what is heretical does not make one a heretic, unless he is obstinate in his error.

How, then, does a Catholic assist a fellow Catholic from falling into  obstinacy, regarding a heretical doctrine?

First, he should point out to his brother, his sin and the error; then, remind him, that without the truth and authentic Faith it is impossible to be saved.  Third, we should pray for the brother so long as we are not certain of his obstinacy. After that, according to the teaching of St. John the Apostle, we are not obliged to pray for his repentance; however, we may continue to do so, or instead we  may pray to be delivered from him, or for God to punish him for his sin.

Let us, in charity, rebuke the Holy Father for his error, so injurious to the very essence of salvation in Christ.

Cf. the Greek-English interlinear text for Romans chapter ten at

Cf. Also, the Petition to the Cardinals regarding the Grave Improprieties of Pope Francis