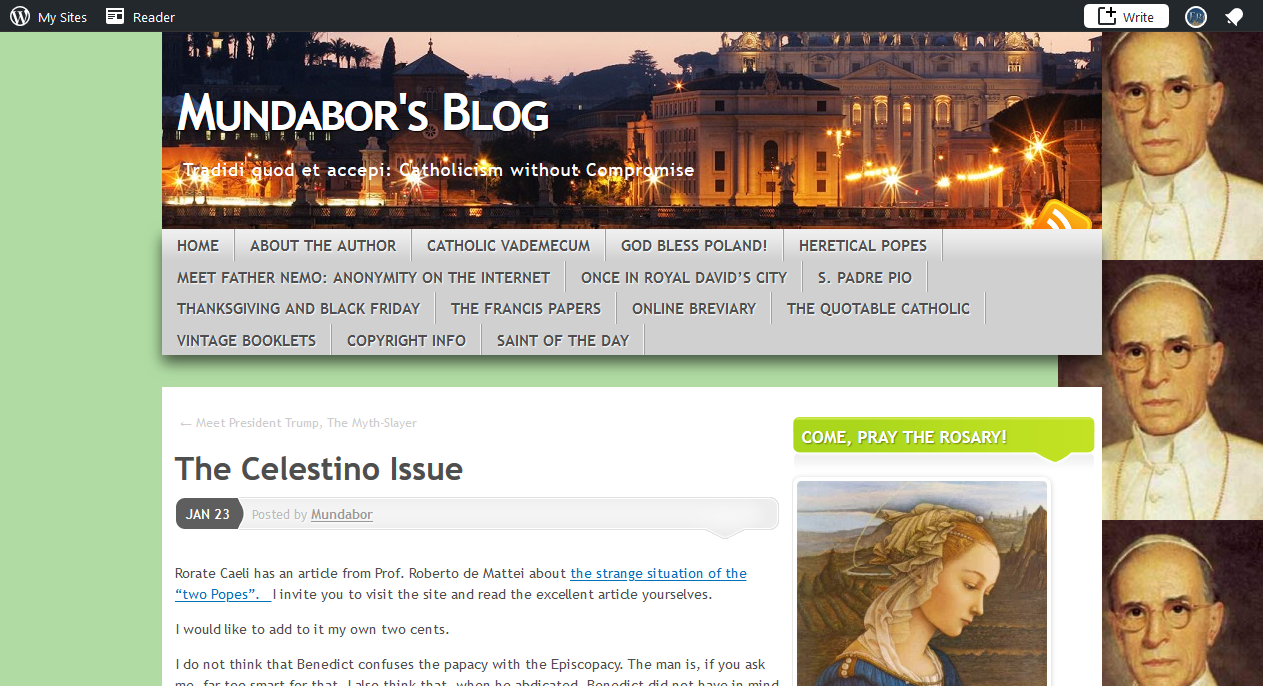 I have not infrequently read the petulantly declamatory Blog, known as Mundabor. It’s a blog that can be counted on to insult Bergoglio at every turn and nearly every day. As its author often says, in other words, what is worthy of vituperation, should be daily excoriated. He has in the past identified himself as an Italian living in the U.K., and an ardent fan of Ronald Reagan and Pius XII

I am all for excoriating heretics and Antipopes. But as a Catholic I realize the danger in putting oneself up in judgement over a pope, because then you are putting yourself in a position between him and Jesus Christ, if not above Jesus Christ Himself.

The munus of the office of Saint Peter is something tremendous. If you really believe that Jesus Christ is the Only Begotten Son of the Eternal Father, then you must cower at the words: You are the Rock, and upon this rock I will build My Church, and the Gates of Hell shall not prevail over Her. . .  I give to thee the Keyes of the Kingdom of Heaven, whatsoever you bind on earth, shall be bound in Heaven, and whatsoever you loose on earth, shall be loosed in Heaven.

I know from experience and by faith and reason, that I am not God. I know from the facts of history I am not the Pope.  The conclusion I draw is that I cannot judge the man who is the pope.

Pope Innocent III said it clearly, though not exactly in these words:  My status is such that no man can judge me, except in matters of the Faith.

Now, my critique of Mundabor’s recent post, entitled, The Celestine Issue, which was published today, where the author goes after Pope Benedict with knives. The post is his commentary on Dr. Roberto de Mattei’s piece at Rorate Caeli.

Let me start by saying, that I welcome a discussion on the Resignation. It shows that both Dr. de Mattei and Mundabor have come to the point, psychologically, that the feel they must address the issue of who is the real pope. They are both convinced, therefore, implicitly that evidence is so overwhelming that it appears to many that it cannot be Francis. However, they both publicly still hold that Bergoglio is the Pope.

And in this vein, Mundabor writes of de Mattei’s assertion that Benedict acted out of theological error, thus:

I do not think that Benedict confuses the papacy with the Episcopacy. The man is, if you ask me, far too smart for that. I also think that, when he abdicated, Benedict did not have in mind a Bishop Emeritus, but rather the well-known figure of the Professor Emeritus in the University system; that is, a title that indicates the persistence of the role and of the attached prestige in the relevant person, without any reference to sacraments.

Why Benedict did this is evident enough to me: a man deeply rooted in history, and extremely informed about the Italian cultural environment, Benedict wanted to eat his cake and have it, which is what he has done his entire life.

Bishop Ratzinger wanted to look progressive to “revolutionary” V II thinkers, but still appear conservative to the solid faithful when he was a theologian. As a Pope, he wanted to look like the Pope of the Latin Mass to us decent Catholics, whilst proceeding to countless progressive appointments and not only tolerating, but promoting inter faith rubbish to appease the progressive lobby.

I recommend you read the entire piece by Mundabor, at
https://mundabor.wordpress.com/2020/01/23/the-celestino-issue/

From that point onwards in the piece, however, Mundabor descends to character assassination of a Roman Pontiff. He has no idea at all what really went on in the Vatican, at any time — none of us do — and he presumes that everything was such as to merit the judgement he imposes.

He wrote this attack piece after I tried to gentle correct him in a comment, some days ago, which he promptly erased. I pointed out that a man cannot be blamed for accepting the Papacy without knowing how difficult a job it is.* The ones we should blame are those around the pope that do not help him when he has good will, to do what is good and do it well. Pope Benedict XVI had good will, but was clearly badly served by all about him. They did not fear Benedict and Benedict was not the kind of man to make others fear him. He had seen to much of that in Nazi Germany, and he found none of that in the Life of Jesus Christ.

But Mundabor would hear none of it.

So, in critiquing Mundabor’s arugment, I ask all to first recall here the words of Our Lord: With the measure you measure out, so shall it be measured back unto you.

Whenever I hear these words, I shudder. These words should make everyone cringe with terror and urge them to reexamine themselves in their judgements of others. Yes, we might have to condemn the deeds of others, but we must be always open to being merciful to all.

It would be crude and inaccurate to say that Mundabor’s argument boils down to: Accept the Resignation as valid, because, you see, Ratzinger was a whishy-washy, two-faced coward, who wanted it both ways and did not get what he bargained for. But I think that is an approximate summation, even if it is but a petulant act of emoting which does not amount to a rational argument. For, a Pope does not renounce, unless he renounces the munus, cf. Canon 332 §2. That is what the law says, and you cannot argue around it. Not even with psychology or insults.

As an ironic aside, the subtitle of Mundabor’s blog is, Tradidi quod accepi, which is Latin for I have handed down what I have received.  From this post, I guess that means that Mundabor studied under Freud or Jung, the founders of psychiatry and psychology, because he certainly did not receive this way of speaking about a Pope from Pope Innocent III or the Catholic Church.

* Moreover, this faultlessness in accepting being elected in Ratzinger’s case has solid historical grounds, for,  in the conclave of 2005, the Cardinals only succeeded in presenting Ratzinger as a viable candidate to the St. Gallen Mafia’s man, Jorge Mario Bergoglio. Accepting his own election, therefore, would then have been the duty of every man, not only of Cardinal Ratzinger, even if he felt disinclined to the magnitude of it.

CREDITS:  The Featured image is a screen shot of the Article discussed above. The quotation is verbatim, and is republished here according to fair use standards.