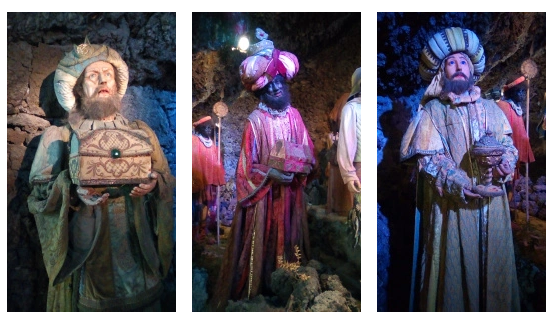 I do not know from whence arose the secular custom of making a New Year’s Resolution, but Catholics have a much better motive for changing their lives at the beginning of a New Year: Epiphany.

Epiphany is the ancient Christian Christmas. That is, the day on which Christians gave presents was not Christmas but Epiphany, the Feast of Manifestation. On this Day, Christians celebrated the miracle of the changing of water into wine, which Our Lord performed at Cana, in Galilee, to reveal Himself to Israel and begin His public ministry. On this day too, Christians celebrated the visit of the Magi to the Child Jesus, at Bethlehem, since it was on that day, that the first Gentiles came to adore the God-King of Israel.

The Three Kings gives us all an example of Christian life. That our life should be a pilgrimage, which is guided by the Light of Heaven, and which leads us to sacrifice and leave behind everything, so that we might lay down the treasure of our life in an act of adoration of the one True God, Father, Son and Holy Spirit, and in doing so, be found worthy to enter the House of the Holy Family, in the Kingdom of Heaven.

So what the Three Kings did on Epiphany, is an archetype of what we should be doing every day our our lives, and each year.

Let this be the motivation of your new years resolution. What gift are you going to give the Child of Bethlehem this year?

Let your gift be a gift of myrrh

Myrrh was a rare substance, the dried sap of a tree which only grew in the hottest and driest parts of Arabia. It was burnt at funerals as a sign of morning and to cover the stench of the decaying body.

Myrrh in Christian traditions has thus always been a sign of mortification and of the spiritual gifts we give God by mortifying our passions.

And the best gift of Myrrh you can give is purity.  Because lust, howsoever little it be indulged in, is a mortal sin. And many live in this vice their whole lives, deceiving themselves into thinking, that what Our Lord speaks of, when He says, “If a man so much as look as a woman desiring her, he commits adultery with her in his heart”, he is speaking of the desire for a particular woman, the use of the imagination, or a consummated act imagined or wanted.*

No, the truth is, as the Saints teach us, that Our Lord is speaking of the simple desire to rejoice sexually at sight of her.

A whole generation of Catholics were ruined by an anecdote which was told about Pope John Paul II, that, namely, he had the habit of looking at women as the passed by. And that he excused himself saying it was only a sin if you looked twice.

This is simply not true. It’s a mortal sin. And it is not just mortal for a man who is not free to marry, such as a priest or religious or a man who is already married. It is mortal for all men and all women, whether they get a rush from it or not.

This sin consists in desire, not in acting, not in imagining, but in allowing oneself the desire. It is wrong to feel another person in this way, just as it is wrong to feel the sight of any human being, yourself, or another, in this way. This is why the use of pornography is always, in every circumstance, a mortal sin in itself. For since the consent to experience pleasure is a perfect moral act, as no one does this who does not know of the pleasure, who does not will to accept it, and who does not will to rejoice in it.

Purity on the other hand consists in repelling or rejecting with disdain and disgust impure desire, and in taking every step to avoid its occurrence, through modest dress, turning aside the eyes, and avoiding bad company and the use of social media when one is being tempted.

Let your gift be a gift of Frankincense

Frankincense was the sweetest smelling of all incenses. Frank- in the English word, means the common kind of.  All scents of incense, which are made of dried resins, use Frankincense as the base, since it has the ability to carry every scent into the air in its smoke when burnt.

Frankincense, thus, is a symbol of spiritual gifts which continually rise from the heart.  And these are best categorized under the name of prayer.  As Christians, we are called to everlasting continual communion with God. And since God is a Spirit, we can only do this through prayer, continual prayer, which is founded upon acts of Adoration, Praise, Love, Faith, Hope, Petition.  This is the true desire which should fill the heart of a Christian and blot out all lust for this world.

Let your gift be a gift of Gold

Gold was and is the treasure of kings. As a gift in the hands of the Magi, it symbolizes the greatest gift we can give, of our own selves and of our very lives, purely to God out of love for Him. Let us resolve to do all the good and non-evil things that we do, for the love of God. And let us resolve never to do anything which is sinful, not even venially.

He guards the gold of his own soul, who best protects it. For what do you have more precious that your immortal soul, which by its nature exists FOREVER. And which cannot know eternal blessedness except in GOD and WITH HIM forever.

And, thus, the best protection of this gold of our soul is to make every decision in view of our eternal salvation and that of others. We should use this criterion always: What way can I do this in a way which does not endanger my soul? If there is no way, then do not do it even if it appears licit. If it is evil, then flee from it, regardless of how many of those around you fling themselves into it.

What gifts are you bringing the Child of Bethlehem this Epiphany?

Today is Saturday: go to the store of Confession and buy by your tears and firm proposal of amendment one or more of these gifts, to present to the Child Jesus at Mass on Epiphany, this Monday!

(I will leave it to those more adept than I, to guess which King is which: leave your guesses in the Comments section, if you like).

* For those not familiar with Catholic teaching on morals, please note that this case deals with a woman who is not your wife.