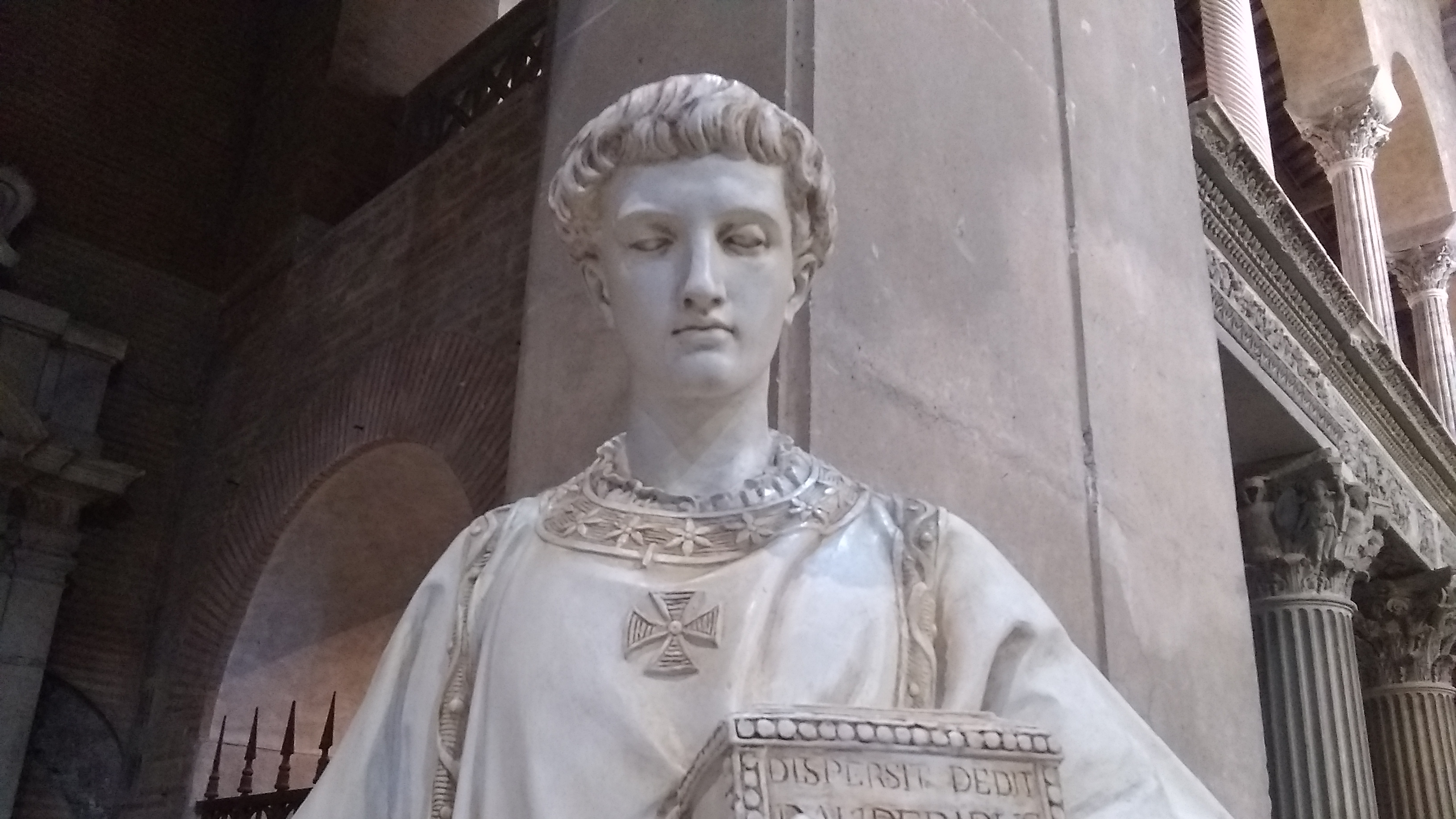 For the sons of Saint Francis, the virtue and practice of obedience is one of the principal fundaments of our religious life. Saint Francis showed us the way by his obedience to Jesus Christ, in undertaking a form of life and apostolate which is perfectly faithful to the Gospels.

It is thus easy for a faithful son of Saint Francis to understand that obedience is owed to God, not to men. Indeed, in his Order, a superior cannot command something contrary to the Gospel or to his Rule. There is a recognized hierarchy of duties.

In the Church, the same is true, though it is often forgotten and frequently obscured by unfaithful Catholics.

The Analogy of the Body

You see, just as a human body is one living thing, which lives by one principle, the immortal soul which vivifies it, and just as this one living body is the host to many other friendly and noxious life forms, at the level of bacteria, viruses and parasites, so the Mystical Body of Christ, the Church, is the host of many small Catholic groups and societies, some beneficial and some noxious and parasitical.

Discerning where and in what the true life of the Church is found and learning to distinguish between beneficial groups and parasitical ones, is a must today in a Church in the throws of revolution and apostasy.

And since it is Saint Paul the Apostle who calls the Church, the Body of Christ, we can, in accord with the Apostolic Tradition, work out and discern lesser truths by applying the analogy of faith, with things in the natural world.  Thus, if we reflect on some simple truths of biology, we can derive so simple laws on ecclesiology by analogy.

The helpful bacteria in the human body is one of the great servants of human life. It breaks down food and waste and sees that it arrives in a form in which the body can use it for nutriment or expel it as excrement.  In the human body, these bacteria are not part of the body, they have their own individual life, but if you killed them all off, in any one human body, the body would also die, since it does not have all the functions necessary to do these activities.

The helpful bacteria can be used as an analogy for the humble faithful Catholic. The analogy is not exact, because the individual Catholic is part of the Mystical Body. But it is accurate in this, that the humble faithful Catholic is exposed to all the nutrition of the body (the Sacraments) and takes that in and breaks it down in his daily life of fidelity, and by fidelity, when he or she encounters error, or sin, or vice or falsehood, by rejecting it and warning others about it, he helps the whole Body expel it as noxious to the Church.

This is true, whether the error is ideological or canonical, whether the vice is personal or in another, whom he helps to overcome sin by counsel or assistance.

The harmful bacteria is not at the service of the body, it is at the service of itself. It’s only interest is to feed off the body. Its zeal is simply in multiplying itself and feeding more and more. This is the kind of bacteria which makes you sick and throwup.

Analogously, the harmful bacteria in the Mystical Body is the Catholic who is pushing some sort of foreign ideology. He is convinced that that foreign ideology is going to help the Church and he is completely oblivious or does not care, if it makes the Church sick. He is the classic ideologue, who does or does not realize what he is doing is evil and destructive.

There are beneficial parasites. I won’t name them, because knowing something of their existence and location inside and on the skin of the body, makes some people uncomfortable. But here I want to talk about the noxious ones: leeches, tape worms and all those kind which bore into the body and try to remain there for years.

These parasites seem innocent at first. They enter the body usually as eggs or as larvae and as they grow the feed on the body or its food in the digestive track. They avoid being attacked by the immune system by secreting substances against it or by wrapping themselves up in the proteins of the body to disguise themselves.

The harmful parasite is the perfect analogy of the corrupt religious or cleric or of the errant lay apostle, who began doing simple apparently good works, but once he obtained a dominate position, because preaching himself and not Christ.

Obedience is owed to Faith, not to Fraud

Obviously, the cells of the human body owe their obedience only to the body. Their individual genetic code is the same as that found in every other cell and they easily recognize what is friendly from what is foe, in most circumstances.

Analogously, the faithful Catholic is bound to all other faithful Catholics by one same Faith and Baptism. They live as part of the Mystical Body because they are vivified by the one same Spirit, the Holy Ghost.  They recognize friend from foe by the grace of discernment, which is simply the application of revealed truth as the principles of a forensic analysis, that is, as the principles or tools whereby they determine that this or that is catholic or is not catholic, because it agrees or disagrees with what the Church believes and or teaches, in any field, dogma, doctrine, discipline or Canon Law.

Our obedience then is not owed to anyone in the Church unconditionally. We are not even obliged to submit to the pastors of the Church unconditionally. Canon 41 expresses this well: when what they command is contrary to the Gospel, we have the right to refuse it. If what they command damages souls or the Church, we can omit its execution and refer back to them with feedback, if doing so is not throwing a pearl before a swine.

But harmful bacteria and harmful parasites think otherwise. They want you to practice the obedience of the Waffen SS and do whatever you are told and shut up! — And they want you to be so pliant that you would rather damn yourself to hell with Adolf Hitler than actually do something opposed to them. — The only difference here between the parasites and the bacteria is that the parasites are in control and the bacteria run cover for them.

This is why, there is no one in the Church truly, who is in communion with Bergoglio, on account of his pertinacious and manifest heresy. For when the Cardinals asked him questions and he refused to answer, he manifested by that silent refusal what is called canonical pertinacity, and since the questions regarded matters of divine faith, he ipso facto manifested that he lost every office in the Church. — The communion that those who claim to be in communion with him have, therefore, is not Catholic, not supernatural and not ecclesial. It is a conspiracy for a common evil goal or for a collection of evil goals, to break down the Mystical Body and make it serve their own private agendas. Such a claim of communion is a claim to nothing binding on anyone.

The same applies with the Declaratio of Pope Benedict. Those who do not reply to the arguments and proofs that it was invalid according to the norm of Canon Law, after 90 days, by that rejection of Canon Law show pertinacious rebellion against the Apostolic See, and that means they are schismatics, who in virtue of canon 1364 immediately lose all office and position in the Church, all authority to govern and rule.

This is why everyone who is making a buck off claiming that Benedict validly resigned is not going to let go of that faux communion — it is the very principle of their parasitic life. And just as no parasite or harmful bacteria would collaborate with the immune system for its own expelling, so none of these low grade individuals would ever dare call for a Synod to punish the guilty in the Church.

But this is also why you have no obligation to any Cardinal, Bishop or priest who tells you to “recognize” or go along with the usurpation of the papacy and the destruction of the Church, because these men are harmful bacteria and harmful parasites which must be declared to be such by imperfect Synods.

And this is why the true sign of a faithful Catholic in the present crisis is only one: that he calls for a Synod to condemn these heretics, apostates and usurpers, and to hear the facts of the case and consider the laws of the Church which show that Benedict is still the pope.