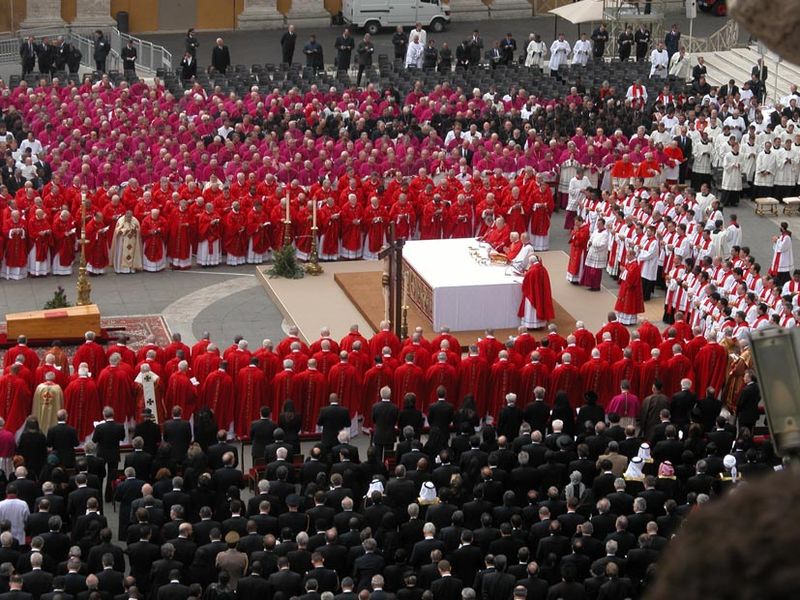 There has been a lot of speculation by Catholics about the next Conclave.

Will Benedict die before Bergoglio, or Bergoglio before Benedict?

If Benedict before Bergoglio, will any Cardinal Elector break with the others and elect a successor to Benedict? — Only 1 is required.

If Bergoglio before Benedict, will the Cardinals proceed to a Conclave, or will the recognize that Benedict was always the pope?

But so far, I have not seen any Vaticanista or even blogger approach the question of what role the Corona Virus might play in the next Conclave.

The Corona Virus was reported in one patient at the out-patient clinic at the Vatican yesterday. Today, the entire office of the Secretary of State was sanitized.

So we can be certain that the Corona Virus will spread at the Vatican in the next 14 days.

Before the arrival of the Corona Virus at the Vatican it was widely reported that Jorge Mario Bergoglio has the flu. This years flu is very powerful. Those who grew up in the New World, like myself and Bergoglio, won’t have resistance to it.

Thankfully, I already had the flu. I was sick for 10 days, in bed constantly. And for another 10 days, I was so weak I was in bed most of the time. I had a lot of time to think of eternity, and when I was nearly recovered, I decided to start FromRome.Info as a full time apostolate advocating for Pope Benedict.

Those who catch this influence are likely to be harmed particularly severely if they catch the Corona Virus at the same time. Its not polite to speculate about a specific person dying at the Vatican, so I won’t.

But not only Bergoglio but every Cardinal who works in the Roman Curia might fall sick.

Thus, the scenario of a new Conclave this spring is now very likely.

Pope Benedict XVI is under quarantine and I think he will have a better chance of surviving the Corona Virus, since he has lived his whole life in Europe and has much more robust antibody preparation.

The prospect of a new Conclave this spring probably sends chills of terror down the spines of many Cardinals. They would have to come to Italy, and remain in the confined quarters of Santa Marta and the Sistine Chapel for several weeks, making their infection by the Corona Virus highly likely. Others might already have succumbed at the Vatican, changing entirely the political dynamic of the next conclave.

Many probably will decide not to participate.

Others will have a lot of reasons to think of Judgement of God.

Also, who will want to be pope? He will have to live at one of the major epicenters of the Corona Virus?

You can be sure that all those Cardinals who might have weakened immune systems will opt out.

The ones who do have the courage might very well be inclined to act on the kind of proposal which I based my Letter to the Cardinal Dean on, or upon that which my proposal to relect Pope Benedict contained.

Because the consequences of electing another pope, while Benedict XVI lives, is having another antipope. And who wants to risk the Corona Virus to be an antipope or have a dubious claim to the papacy? That would not be a good ending to an ecclesiastical career which aimed for real achievements.

But on account of the epidemic, the College might simply refuse to convene, and leave the Church with Pope Benedict on the one hand, and a sede vacante in the Bergoglio Church on the other. And that would make the crisis in the Church even more confusing.

In any event, God is in control and this corona virus might be the divine intervention that some Bishops and Cardinals — who refuse to look at Canon Law and — prayed for instead, which is sent in reply, but not quite the kind they expected.