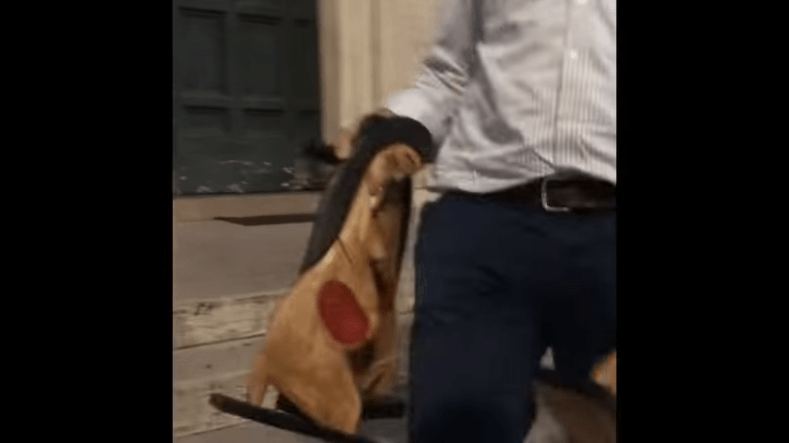 In October, the Catholic world was witness two 2 extraordinary events: one revolting and one inspiring.  The one revolting was Bergoglio’s adoration of pagan idols in the Vatican Gardens, on October 4, 2019 and the reverence he and many others showed them in Saint Peter’s Basilica, the Sunday following. The one inspiring, was the clandestine snatching of 5 idols of Pachamama from the Church in the Transtevere, on Monday Morning, October 22, by unknown Catholic men.

The scene was video taped and edited.

Here is the video.

The video was a multimedia sensation, being viewed by more than 200,000 individuals world wide.

Subsequently, the Baron Alexander von Tschuggül admitted to be one of the key perpetrators. He was universally praised for the heroism and faith displayed in this historic act of Catholic counter-apostasy. Here is the video of his confession:

On March 27, Dr. Taylor Marshall admitted he participated in the planning and funding of the deed. He now admits to be the editor of the Part II narration of the event, which editing was done very well, in my opinion. Here is that video.

Some are praising Dr. Marshall for being a protagonist. Others are condemning him for orchestrating a media event. Some because he financed it, but mostly because of his mental reservation or deception — depending on what point of view you take — in publicizing the Pachamama snatching after the fact.

While, from my training an anthropology and archeology, I see value in preserving ancient artifacts, even if they be idols, because their conservation in a museum, where they are no longer worshiped, helps understand human history, I agree with the Saints and Scripture, that an idol used in a house of God for the worship of a demon, should be removed and can licitly be destroyed or disposed of.

However, while that is the teaching of the Saints, it is not the law in Italy, which has a secular constitution and is a masonic state.

And it is punished in the Italian penal code, Article 416, with imprisonment for 3 to 7 years. Solely for participating in the conspiracy, but not in the crime of theft or destruction of property, the punishment is 1 to 5 years imprisonment. If committed in violation of immigration laws by foreigners, the punishment is 5 to 15 years.

So, my humble advice to the Baron and Doctor, is this: lawyer up and plan on taking your vacations to some other country, than Italy, for quite some time, as, if you should enter Italy, you might be arrested on the spot for criminal conspiracy, now that you have publicly admitted to the crime in all its particulars.

Also, if the Italian government wants to be nasty, they can ask your native countries to extradite you to Italy, so be prepared to fight extradition requests.

But, for my part, I say, God bless you for your good work.