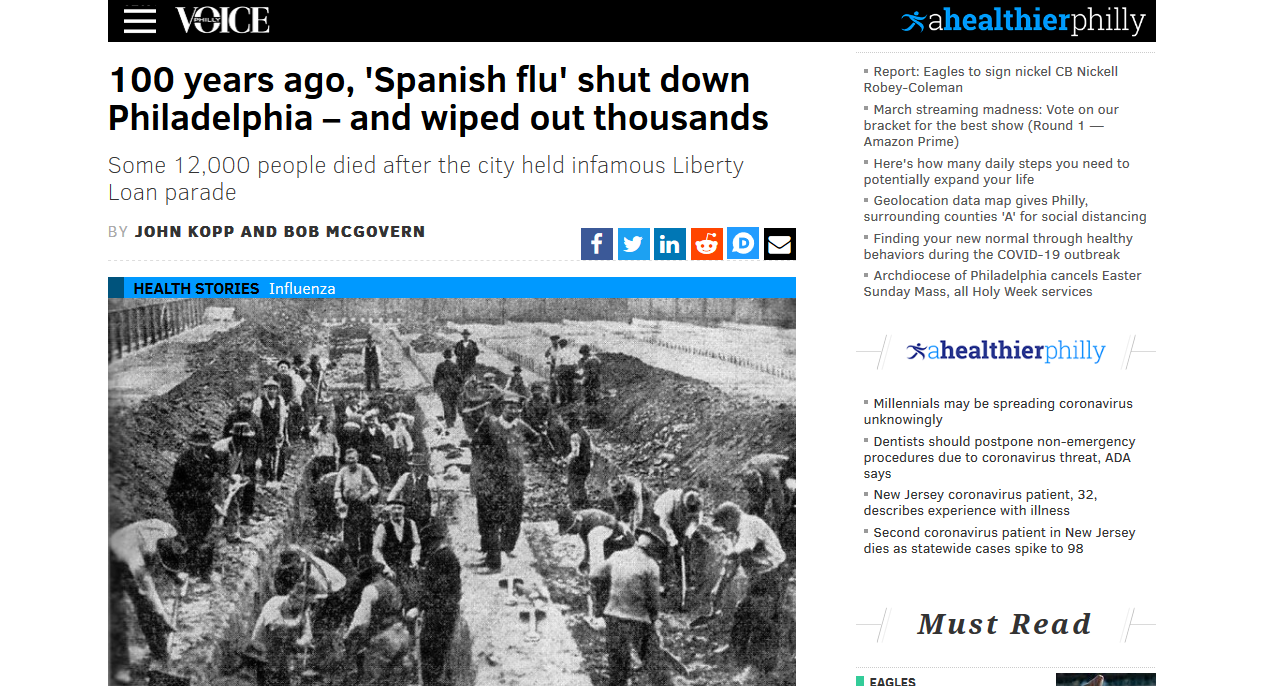 I am horrified at Rorate Caeli that they would stoop so low as to encourage the faithful to go without the Sacraments! And to justify the decision of superiors in Church and State who want to shut down the Catholic Church!

I am especially horrified at the shell game perpetrated by Father Carl Gismondi, FSSP, in his Op-Ed, entitled, Suspending Public Mass is not new, where he cites the example of Philadephia during the Spanish Flu of 1918 as a precedent for closing churches today round the world.

I am personally very incensed. I am such, because my family comes from Philadelphia and lived their during the Spanish Flu Epidemic which struck the city in October of 1918. My great uncle Antonio Cafeo died in that Epidemic.

My grandfather Giovanni Cafeo told me about it, when I was discussing with him one day, nearly 40 years ago, how he survived the Spanish Flu Epidemic. He nearly died himself. He caught it while working as a barber in the U.S. Army in France, as an enlisted soldier. They had to move him to a hospital on the French Coast near Nantes, where he convalesced for 3 months.

I asked him then, about his brothers. It was then he told me that I had a great uncle, who died in the epidemic: Antonio, my grandfather’s older brother. He died at the age of around 28 years. He was a violinist, and very close to my grand dad. I could see in the face of my grandfather the profound love and attachment he had for his brother, even 70 years later, when he spoke of Antonio, briefly though, because it was such a great sorrow to him, that he did not want to remember it for long. I asked him what happened to Antonio. “He got very sick and they took him away. I visited him, but they later told me he had died.”

So I am astounded at Father Gismondi, that he should cite the example of Philadelphia in the Influenza of 1918 to justify the monstrosity of mania which has gripped the Bishops of the world over a virus which is not even as lethal as the common winter flu!

In his article, he cites a book for reference: a book which condemns him and the bishops of today. That book is entitled, The Work of the Sisters during the epidemic of influenza, October 1981, by  Francis Edward Tourscher. It recounts the heroism of the Catholic religious who ministered to the sick during the epidemic which gripped the city of Philadephia in 1918. I do not know, where my great uncle was cared for or died, but I like to think it was in a bed under the care of these truly saintly women.

Well the point of my objection to Father Gismondi is this. From reading the book you can see that the sick were brought the sacraments of Eucharist, Penance, Baptism and Extremunction (cf. p. 29). And that public funerals were celebrated. Benediction of the Blessed Sacrament was still celebrated (p. 23). Seminarian dug graves for the poor (p. 19). Masses were still said with the people.

And if priests were doing all these things for the sick and dying, is Father Gismondi trying to convince us that they were NOT doing these also for the living?

There is absolutely no comparison to be made. The death rates from coronavirus are minuscule. There are not as many confirmed dead in the entire world from coronavirus as there were in Philadelphia from the Spanish Flu of 1918!

But as regards the closing of the Churches, the author of the Book cited, Mr.Tourcher discusses this on p. 111 in the appendix. The Churches were NOT locked, attendance at private masses on Sundays or weekdays were NOT forbidden (p. 112), visits to the Blessed Sacrament continued normally. For two Sundays, Masses were celebrated in the open air (p. 112). The order of “closing” lasted only 3 weeks (p. 112).

Is what this book recounts sufficient support for Fr. Gismondi’s argument. Hardly. Rather, it is deeply offensive to the heroic example of the Catholic priests and religious sisters who served so heroically and who had more Catholic faith in their little finger than most of the clergy today combined, who are cowards and lackeys running like little girls as from a bear, which is nothing more than a mouse!

For more information about Philadelphia during the Spanish Flu of 1918, see, 100 years ago, “Spanish flu” shut down Philadelphia — and wiped out thousands, which was published by the Voice on Sept. 27, 2018, from which I have taken the screen shot which is used as the Featured Image here in my editorial.