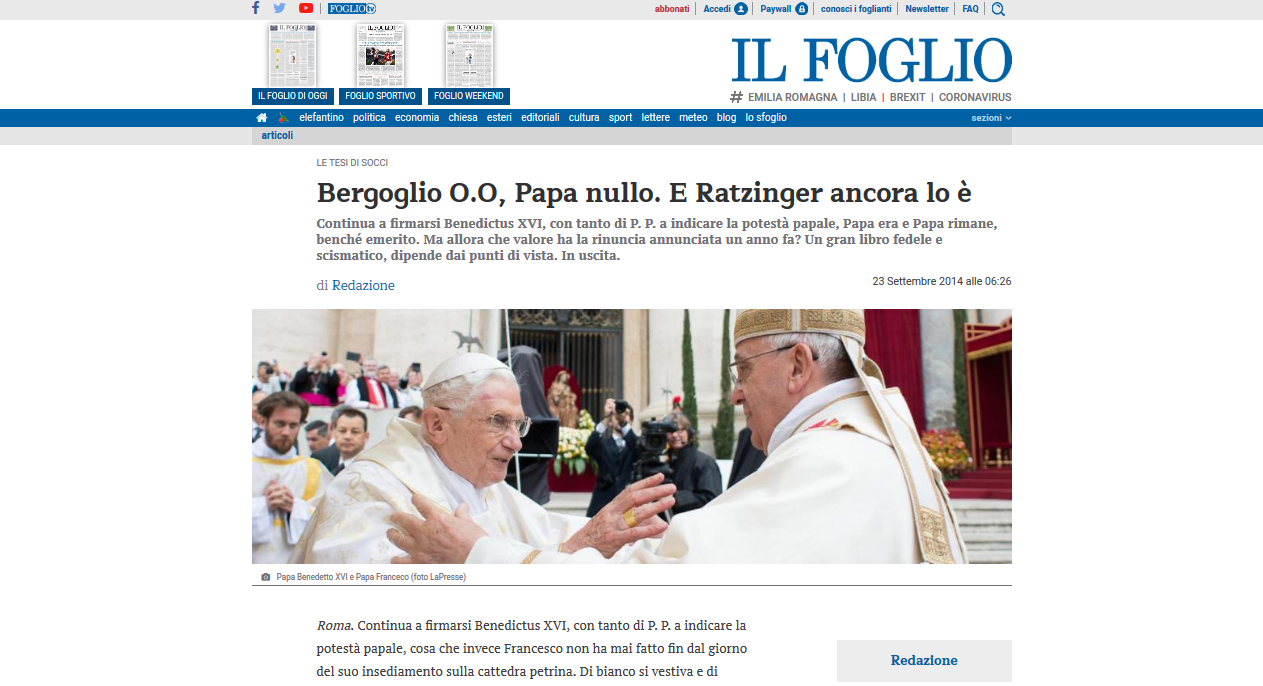 Chirs Ferrara poo-poohed Ann Barnhardt’s collection of evidence, the other day, by calling it a “data set”, in the pure style of every gaslighting Bergoglian apologist. But the truth is the exact opposite — just as with every Marxist apologist — because projecting your own errors on your opponents is one of Salinsky’s Rules for Radicals.

But the only “data set” on Chris’ side is the consistent and constant claim by the Cardinals that Benedict resigned the Papacy. A claim made without citing any evidence which is supported by the Law or reality.

Even major Italian newspapers admitted that Benedict had clearly retained the papal dignity and power, back in 2014. — But perhaps Chris does not read Italian.

Here is my translation of the opening of an article, entitled, Bergoglio 0.0, Papa nullo. E Ratzinger ancora lo è, which appeared in Il Foglio on Sept. 23, 2014 at 6:26 A.M., Rome time. The title translates:  Bergoglio 0 for 0, a null Pope. And Ratzinger still is the one.

Rome.  He continues to sign himself as, Benedict XVI, even with the P. P., to indicate the power of the pope, a thing, however, which Francis has never done from the day of his enthronement on the Chair of Peter.  He used to dress in white and he continues to dress in white, even if he has laid aside the mantle and the cincture. There was not enough time to find a black soutaine in all the Vatican, is the reluctant justification which came from beyond the Tiber. He used to be the Pope and he remains the pope, though emeritus.  Even the coat of arms has been retained with the crossed Keys, which a few zealous Cardinals, expert in heraldry, tried to remove, so as to remove all reference to the Petrine Ministry. But, now, of what value was the renunciation made by Joseph Ratzinger, sitting on the red throne in the Sala Clementine, on Feb. 11, a year ago, to the surprise of the crimson clad prelates, who were present, a few of whom — not being so good in Latin — did not understand the meaning of what was happening: “a unique case in 2000 years of Church History”.

I know my Church history. The only unique thing in 2000 years, is not a valid papal resignation, it is an invalid papal resignation, that is ignored, yet taken as valid by a conspiracy of all the Cardinals. — The Cardinals, remember, are the reason for most of the Antipopes of history, let us not forget. Antipopes do not pop-up into being from “data sets” of a laywomen reading Canon Law.

NOTE: The Latin abbreviation, P. P., means Pastor Pastorum, that is Shepherd of Shepherds, and has been used exclusively by the Successors of Saint Peter for centuries.

CREDITS: The Featured Image is a screen shot of the page of the Italian Newspaper where the article still appears to this day. Used in accord with fair use standard for editorial commentary.