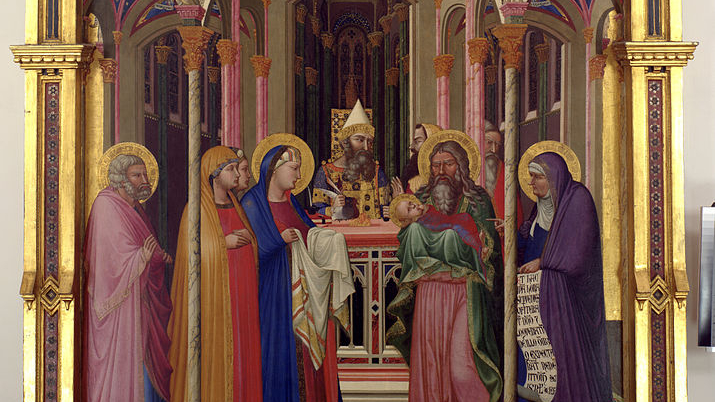 Being a Feast of great importance, a Duplex II, in the Missale Romanum from the Council of Trent until the deformation promulgated by Pope Paul VI, when its name was changed to conform to that of the Byzantine Rites, it nevertheless, survived and is still commemorated even on Sundays. In English, this ancient Feast was called Candlemas, on account of it being the traditional day for the blessing of candles used in Church. In some countries, the blessing of St. Blase is given after Mass, today, with 2 of those blessed Candles, placed upon the throat — a thing which can only be validly done by a Priest or Deacon.

This salvific event finds its importance in that, for the first time in the life of Our Lord, the Passion which would come upon our Lord and the suffering His own Mother would share in it, were revealed to Our Lady and Saint Joseph. The events are described in the Gospel of Saint Luke, Chapter 2, verses 22 ff., which I quote here from the Douay Rheims Bible:

[26] And he had received an answer from the Holy Ghost, that he should not see death, before he had seen the Christ of the Lord. [27] And he came by the Spirit into the temple. And when his parents brought in the child Jesus, to do for him according to the custom of the law, [28] He also took him into his arms, and blessed God, and said: [29] Now thou dost dismiss thy servant, O Lord, according to thy word in peace; [30] Because my eyes have seen thy salvation,

[31] Which thou hast prepared before the face of all peoples: [32] A light to the revelation of the Gentiles, and the glory of thy people Israel. [33] And his father and mother were wondering at those things which were spoken concerning him. [34] And Simeon blessed them, and said to Mary his mother: Behold this child is set for the fall, and for the resurrection of many in Israel, and for a sign which shall be contradicted; [35] And thy own soul a sword shall pierce, that, out of many hearts, thoughts may be revealed.

[34] “For the fall”: Christ came for the salvation of all men; but here Simeon prophesies what would come to pass, that many through their own wilful blindness and obstinacy would not believe in Christ, nor receive his doctrine, which therefore would be ruin to them: but to others a resurrection, by their believing in him, and obeying his commandments.

[36] And there was one Anna, a prophetess, the daughter of Phanuel, of the tribe of Aser; she was far advanced in years, and had lived with her husband seven years from her virginity. [37] And she was a widow until fourscore and four years; who departed not from the temple, by fastings and prayers serving night and day. [38] Now she, at the same hour, coming in, confessed to the Lord; and spoke of him to all that looked for the redemption of Israel. [39] And after they had performed all things according to the law of the Lord, they returned into Galilee, to their city Nazareth. [40] And the child grew, and waxed strong, full of wisdom; and the grace of God was in him.

As can  be seen from the text, one can sense that the revelation of Christ’s Passion is accompanied by representatives of all the Chosen People of God:

There is the most Blessed ever Virgin Mary, the Mother of Our Lord, through whom by blood He traces His lineage back to Abraham, Isaac, and Jacob, and through them to Adam and Eve, our first parents.

There is Saint Joseph, the adopted father of Our Lord, according to the flesh, on account of whom Our Lord was legally a son of David and a member of the House of David, to whom God had promised, as a recompense for building that very Temple, that his throne would endure before Him, forever, and that his house would never pass away. A thing fulfilled in the Incarnation of Our Lord and His Eternal Existence as King and God.

There is the Jewish Priest, who is not named in the Gospel, but who was present to receive the offering of Joseph and Mary, prescribed by Moses in the Law.

There is the aged Simon, to whom God had revealed the coming of the Messiah, awaited for by all Israel, and who had the exquisite joy and privilege, on their behalf, to take the Child Jesus into his arms and sing that most inspiring hymn, the Nunc Dimittis, which has become the principal hymn of the Divine Office at Compline, for millenia.

And then there is Anna, the prophetess, to show that the holy women of Israel were no less present at this astounding event.

The Presentation of Our Lord can be said to be the first gathering of the Church of the New Testament, because the entire group, excepting the priest, had faith in Whom this Child was and were gathered together in the House of God to worship Him. They recalled the Scriptures, they praised God, they heard the Gospel of Christ’s Future sufferings, they offered gifts, they sang hymns.

There are several other significant characteristics of the Presentation in the Temple which should not be forgotten.

The first is the reward of the Just: For only those were present who had merited by their fidelity to God, to know the hour of His coming (Simeon and Anna) or who were invited to partake intimately of that Mystery (Mary and Joseph)

The second is the reward of the Persevering: both Simeon and Anna, who did not merit to be invite to know the Mystery of the Incarnation from the beginning, as Mary and Joseph were, nevertheless obtained by their patience in persevering in virtue and in hope, to see the Mystery at last come into the Temple.

The third is the reward of those devoted to Prayer:  Everyone in this biblical scene is a person of prayer. The Child Jesus, who being the Son of God, is the High Priest of Heaven, and now incarnate, is the High Priest of all Creation. Our Lady whose entire life was one of contemplation and prayer. Saint Joseph, who never wavered in his faith to God and in the observance of God’s Law, so much that he merited to receive Angels in his sleep, when he did not receive them while waking. Simeon who was so faithful that he merited by private revelation to know the hour of universal salvation was come. And Anna, who on account of her prayers and proclamations of faith, over so many years of consecrated virginity, merited to obtain that for which she prayed.

The Presentation of Our Lord in the Temple is a Feast to teach us the importance of adoration of the Divine Majesty, that we should never omit this, each Sunday, for the entirety of our lives, faithful in hope and persevering.

The Presentation of Our Lord in the Temple is a Feast to remind us that God is wont to grant special graces to us, in Church, at the time of Most Holy Communion, a thing which we can only perceive if we spend our lives in devout prayer and come to Mass in the same spirit.

And finally, the Presentation of Our Lord in the Temple is an admonition from God, the Holy Spirit, reminding us of the terrible reality of sin, and how to remove sin, we are all called to unite ourselves with the Passion of Jesus Christ, without Which there is no salvation from sin. From the first prefigurement of Catholic worship to today, the Religion of the New Testament centers upon Jesus Christ, as High Priest, and the Gospel of His Passion and Death and eternal Triumph, revealed only with the Resurrection.