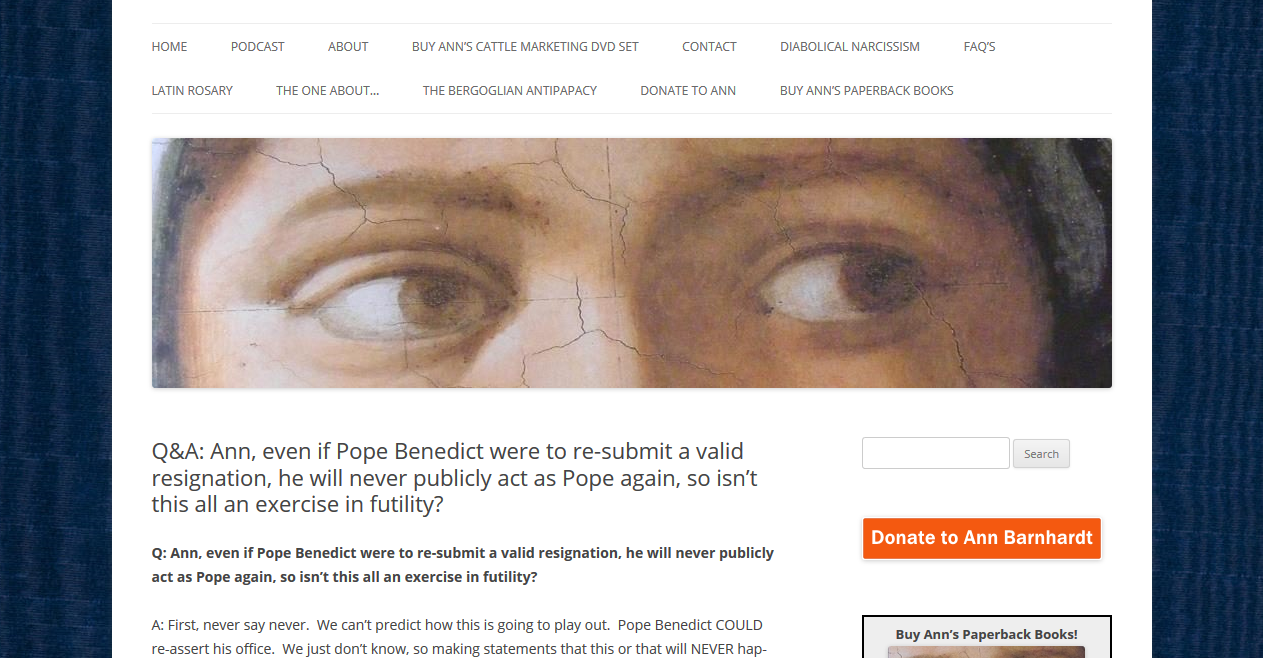 I am continually amazed at how many of the same arguments used to promote despair among us who are faithful to the Church and Canon Law are the same over many blogs. It is almost as if there is some campaign or pysop targeting us. Unfortunately for whomsoever is behind it, they err greatly by attempting to tangle with Ann Barnhardt.

Barnhardt has an excellent post entitled, Q & A: Ann, even if Pope Benedict were to re-submit a valid resignation, he will never publicly act as pope again, so isn’t this all an exercise in futility?

In her reply she exercises a prudence of a Cardinal, far beyond that of even Cardinal Burke because:

I agree 100% with Ann Barnhardt’s analysis and solution and I undersign her proposal. But I want to add that one of the biggest problems in the 7 year Crisis in the Church has been the vain hopes we have all put in the Cardinals to act like men, to act like men of God, and to act like apostles of Jesus Christ. None of them has shown the capacity or competence to do this. At most, like Cardinal Burke, they limit themselves to commenting on the problem, as if, like Barnhardt and myself, who are not members of the clergy, he could do nothing about it.

But here I would point out, something which Ann does not, that her questioner has proposed a question which is quintessentially characteristic of the psysop, of the individual trained to control your mind and manipulate your emotions. So let me unpack that question, in an critique which I will call “psyoptic analysis”, that is how to see pysops for what they are.

Second, propose a possibility within the context of the affirmation of an impossibility, use “even if”.

Fourth, affirm that which your want to come about as if it were a divine certitude: he will  never.

Fifth, deny that the Pope will every be allowed access to the public again:  publicly act.

Sixth, deny that the Pope, even if he is the pope, will ever be allowed to use his power again: as pope again.

I get comments like this from a operative in Minnesota/Wisconsin using a polish name. He leaves positive comments, but when it counts he leaves statements like this question above. Statements like this might be repeated by simple catholics who see them in comment boxes and do not think about them. But in themselves they are excellent examples of now nefarious a pysop can include so many lies and falsehoods and deceits and present them in a psychologically appealing way.

There is a lot of evil behind Bergoglio’s claim to be pope and behind the denial of all of those who say Benedict is not the pope. A lot more evil that we can imagine.

Beware, then of the pysop, and learn to crush it as Our Lady crushes the head of the serpent with a cogent response like that given by Ann Barnhardt in the post cited above.

CREDITS: The Featured Image above is a screenshot of the webpage of Ann Barnhardt cited in this article, used here according to fair use standards for editorial commentary.